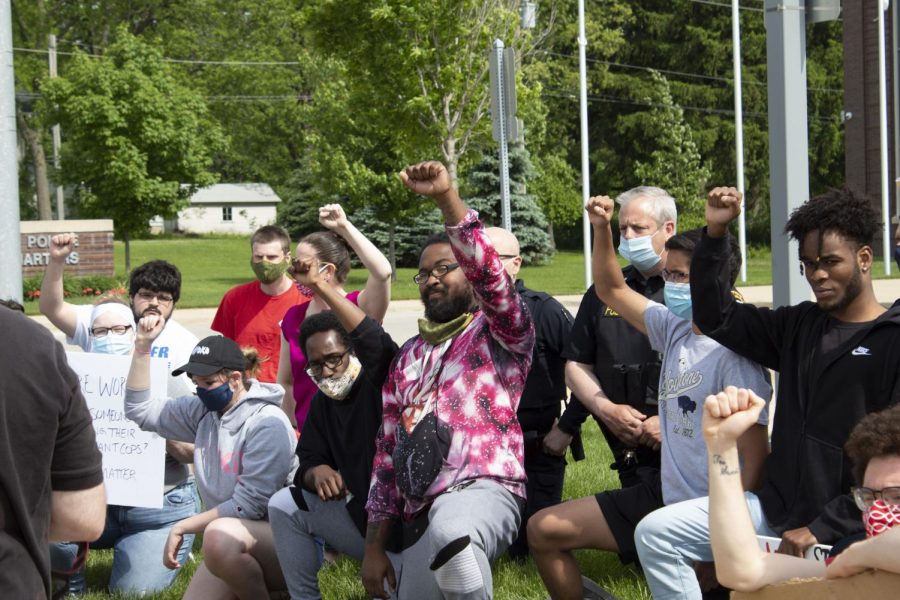 DeKALB — Around 80 protesters gathered at the DeKalb Police Station Monday to rally against police brutality in solidarity with George Floyd, as days of protests continue across the country.

Many of the protesters at the event were seen with face coverings to help mitigate the spread of the coronavirus. Leaders of the protest took turns speaking to the crowd, while DeKalb police officers provided security for the protesters by blocking off the streets.

Tiana McAllister, an organizer of the protest, said she set up the protest through Facebook to spread a peaceful message. 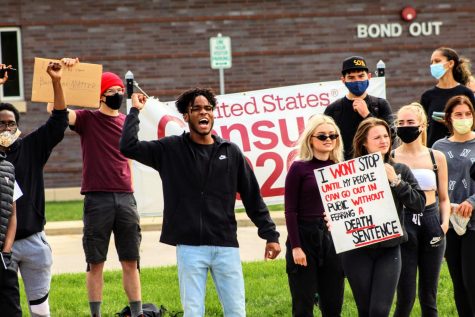 Some of the chants protesters voiced included “Hands up, don’t shoot,” “Black lives matter,” “I can’t breathe” and “F— Trump.”

Monday was the third consecutive day of protests in DeKalb in remembrance of Floyd. Floyd died on May 25 in police custody after former Minneapolis police officer Derek Chauvin pinned his knee to Floyd’s neck for over eight minutes. Chauvin was arrested and charged on May 29 with third-degree murder and manslaughter.

During the protest, community members and DeKalb police officers joined together for an eight-minute and 46-second kneel to commemorate the death of Floyd.

Bob Redel, the incoming interim DeKalb Police Chief said to the crowd, “We are here to support you. We’d like to kneel with you.”

Andre Allen Jr., another organizer of the protest, said he encourages younger people of his generation to peacefully protest instead of sitting at home and tweeting their opinions.

“I really think this generation is special if we can all come together to help change the world,” Allen Jr. said. “We can work together to show that we’re united and that we care about what we’re standing for.”

First Ward Alderperson Caroyln Morris said she attended the protest because she saw that the community was “in agony.” She said it was heartbreaking to see a lot of the looting after Sunday night’s protest, which occurred in her ward.

“The mayor is doing the best that he can,” Morris said. “But my message to him is that it needs to be more. I don’t think the mayor understands what’s happening here and doesn’t understand that this is part of a bigger picture.”

On Monday, Mayor Jerry Smith expressed “regret” after using the word “thugs” while speaking to the media Sunday night about the looting. Smith said he was “mad” after viewing the aftermath of the looting in the city.

Toward the end of the protest, police officers shut down Lincoln Highway starting from the DeKalb Police Station to Annie Glidden Road for protesters. A small group of protesters later broke off from the large march where one person was seen being arrested.

Bryton Rimmer, one of the protesters, said he came out to the protest due to the injustice against the black community. Rimmer said he wants to see a change in the justice system.

“We’ve been dealing with this for so long,” Rimmer said. “We are doing this [protesting] because we needed a change.”