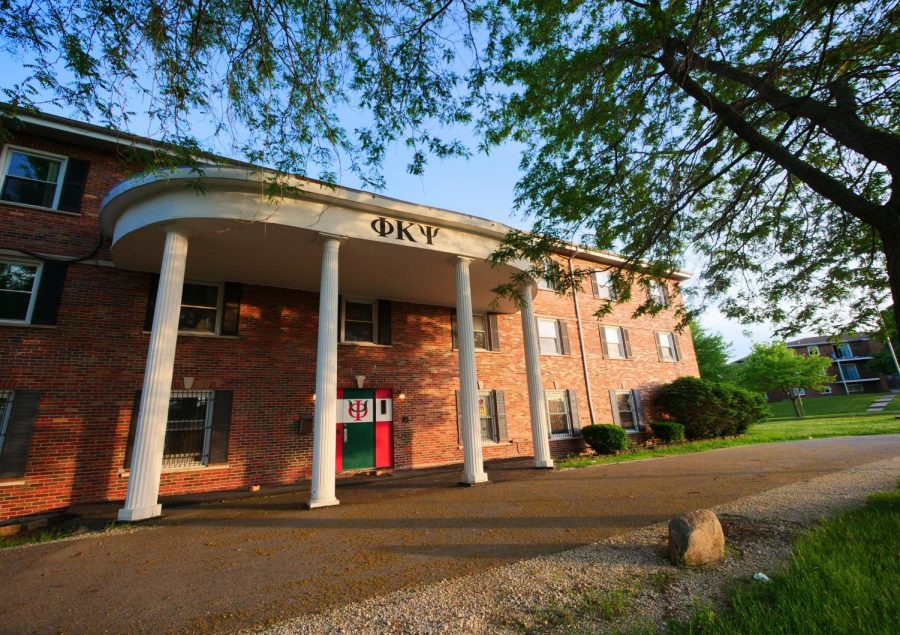 Phi Kappa Psi's fraternity house remains empty as a result of NIU holding most of its fall courses online.

Because of the pandemic, sororities and fraternities have postponed initiation ceremonies until fall, and continue elections and meetings over video chats. Greek life thrives off human interaction, but chapters are maintaining their strong brother and sister bond through their screens.

Every month, the department of Fraternity and Sorority Life conducts meetings over video chat with chapter presidents to touch base, see how they’re doing, see what they need and how they are addressing things with their chapter members, Associate Director Aubrey Hense said.

The National Pan-Hellenic Council, or the “Divine Nine” are historically black fraternities and sororities. There are three women’s sororities and five men’s fraternities, ranging in size from three to 25 members.

Multiculturalism is an important organizational value in UGC, according to the Fraternity and Sorority Life page.

In March, about 50% of chapters were about to do normal election cycles. Now chapters have turned to virtual video calls to figure out who will be elected next year, Hense said. In addition to their elections, video calls through services like Zoom and Google Hangouts have allowed presidents and members to brainstorm ideas for when they can all be reunited, promote philanthropy and community service, and promote sisterhood and brotherhood while away.

“It has been hard to set up elections and give chores, so the members who are staying in DeKalb have stepped up and my executive board has finally come to a great way to execute elections,” president of Phi Kappa Sigma, or Skulls, Rick Green said.

Sorority Delta Zeta holds virtual sisterhood events on Saturdays that new members and all active members can join, President Lea Powers said. Last week they played a “Tiger King” Jeopardy, and joined in on an app similar to “Cards Against Humanity.”

“A lot of organizations at a national or international level have provided guidance for their individual chapters on how to move forward with new members,” Hense said.

At the peak of spring semester, new members of fraternities and sororities were just making themselves comfortable before spring break. New members still interact with their chapter as they would, but digitally. Their initiation looked a little different, however.

Some chapters have pressed pause on initiation and will continue in Fall, while others have made modifications to a new member’s education by organizing it on digital meetings. Some have it set up like an online class with lessons a new member can follow to be prepared come Fall, Hense said.

Physical initiation ceremonies will resume when groups are allowed again. There is only one chapter Henese knows of that is conducting their ceremony virtually.

Skulls moved all new member education to an online format, Green said. The chapter has decided to postpone initiation until social gatherings of 10 people or more are allowed again.

This spring, Delta Zeta welcomed a good number of girls before spring break, Powers said. They virtually meet once a week with the VP New Member Ed and will be completing the new member education process next week. As for initiation, the new girls will be initiated on paper, since they have completed the new member education process. The paper will confirm it is completed. The physical ceremony will take place in the Fall if everything goes back to normal.

First-year Art Education major Danielle Lee, who was initiated Fall 2019 into Delta Zeta, hasn’t had an issue adjusting as a newer member even though it didn’t go as planned. She had already completed her initiation process before the pandemic. The semester after initiation is supposed to be when the newly-initiated fall pledge class adjusts to being full members of the sorority. That was tough to skip out on for Lee.

However, being at home and watching her sisters’ lives on social media has brought them closer than if they were still at school.

“We have an insight into everyone else’s more personal home lives,” Lee said.

She and her chapter feel bummed to miss memorable chapter events like philanthropy and their formal dance.

“We had already paid and set everything up for the event [formal] by the time we had to go home,” Lee said.

Their philanthropy event “Dream Man Greek Goddess” brings in most of the sorority’s money, Powers said. They donate the proceeds to the Starkey Hearing Foundation, the DZ Foundation and to their local philanthropy Safe Passage.

Skulls was looking forward to hosting in person alumni fundraising events and philanthropy events, but unfortunately those have been canceled. “We had to cut back on extra projects around the house because funds we were expecting to raise from alumni hasn’t been raised yet,” Green said.

Away from school, Delta Zeta and other chapters are representing Greek Life. Powers said she has been participating in the Delta Zeta Gamma Rho bingo board that she made, as well as a simple NIU Panhellenic questionnaire that was posted on their instagram story.

I’m representing my fraternity by making sure that my men stay on top of their grades and we are also hosting a digital philanthropy for the Leukemia & Lymphoma Society,” Green said.

Connecting everyone involved in Greek life, across all chapters, Fraternity and Sorority Life have started their own trend on social media. Every Wednesday is “Wear Your Letters Wednesday,” and along with the rest of the school, every Friday is “Red and Black.” These events are posted through Huskie Link on the NIU calendar, Alex Pitner, director of Fraternity and Sorority Life, said.

“We’re asking members to post a picture of them wearing letters, and the person who runs the  [Fraternity and Sorority Life] Instagram has been resharing and reposting,” Hense said.

Keeping a sense of connection off campus has been manageable with the help of social media and technology, but things will look different in the Fall, Hense and Pitner said. Visit the FSL website for virtual resources regarding new member presentations, rituals, recruitment, services and strengthening sisterhood and brotherhood.

They just don’t know what the difference will look like, because no one knows what the new normal is going to be yet.