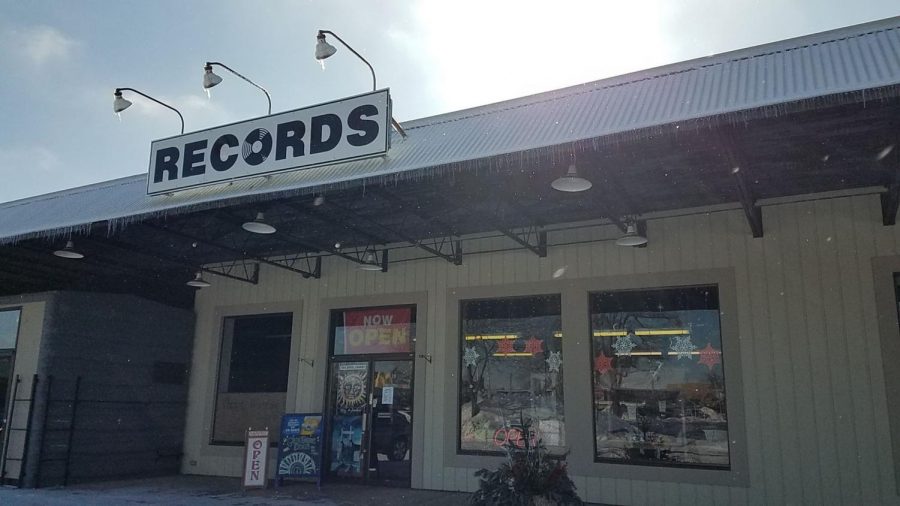 DeKALB – After Illinois’ Stay-at-Home order expired on May 29, local businesses started  returning to work with new rules set in place to prevent the spread of COVID-19, while keeping customers and employees safe. Among the businesses in DeKalb opening their doors for the first time in months are two of its music based shops: Green Tangerine Records and Ax in Hand Guitars.

Home to an array of used/new Vinyl Records, CDs, Cassette Tapes and other musical supplies, Green Tangerine Records, opened its doors on May 29 after 75 days of resorting to online sales. The store’s hours are from 11 a.m. to 3 p.m. Friday through Sunday.

Between March 15, when the store first closed, and April 30, the only way business could resume was through customers messaging the store about the items they wanted through Facebook. The store would then hold them for no charge until the store reopened. Due to the rising demand, shipping options became available in mid-April, Bill Klippel, owner of Green Tangerine records, said.

However, when the stay-at-home order was extended through the month of May by Gov. J.B. Pritzker on April 23, curbside pickup was available to customers throughout the month of May, Klippel said.

“In essence, we had 75 days that, while we are grateful we were able to do anything, were really lost and we will never get back,” Klippel said. “That’s over 20% of the fiscal year and it’s not just with us, it’s with every business that was forced to shut down during that time.”

Green Tangerine is enforcing strong rules to respect social distancing and personal safety, including wearing masks in the store, limiting the amount of customers, offering hand sanitizer and gloves to customers and using disinfectant spray every 30 minutes on every surface.

Record Store Day, an event held twice a year where independent record stores are given exclusive records to sell to customers, was one of many spring 2020 events cancelled due to COVID-19. The event, originally scheduled for April 18, has been moved to three separate days later in 2020: Aug. 29, Sept. 26 and Oct. 24, according to the Record Store Day official website. The event was spread out over three separate days to reduce crowds and prevent further spread of COVID-19, Klippel said.

After months of selling their goods and providing lessons online, Ax in Hand Guitars opened June 1 to continue providing DeKalb with guitars, accessories and repairs.

During the statewide-shutdown, Ax in Hand did what it could to continue business by selling products online and offering curbside pick-up, manager Wesley Carr said. Lessons were also conducted online through Facebook Messenger and the store began pushing online sales which Carr called “a blessing in it’s own way.”

“We learned the power of the internet,” Carr said. “We are fortunate to be in an industry that can exist online.”

One of the biggest challenges Ax in Hand faced, besides a lack of business in the physical store, was a feeling of uncertainty throughout the shutdown and the fact that all of the business strategy that had been developed since the store opened in 1964 was “suddenly not relevant,” Carr said.

Another obstacle was keeping inventory up, because many of the companies Ax in Hand orders from were either not manufacturing or creating products at a reduced rate.

While the store couldn’t be physically open, Ax in Hand saw “the loyalty and support of the local community,” Carr said, with many people buying from the store during the shutdown to support local business.

Now that Ax in Hand is open to the public again, special precautions are being made to prevent the spread of COVID-19. These include providing hand sanitizer to customers, cleaning all of the instruments and asking their customers to respect social distancing and wear masks if possible. The store is open from 11 a.m. to 5 p.m. Monday through Saturday.

Two to three customers are allowed in at one time. For Wesley and his wife Cristal Carr, who also manages the store, safety is of the utmost importance. With a young daughter Wesley and Cristal are conscious of what occurs in their store.

“We believe in the store, we believe in this community and we believe in our store’s place in the community,” Wesley said. “[In the future,] we hope to bring in more brands, diversify our musical clientele and focus on growth. We don’t want these past few months to negatively impact the store and I don’t think they will.”