Bubba Wallace, NASCAR and knowing when enough is enough 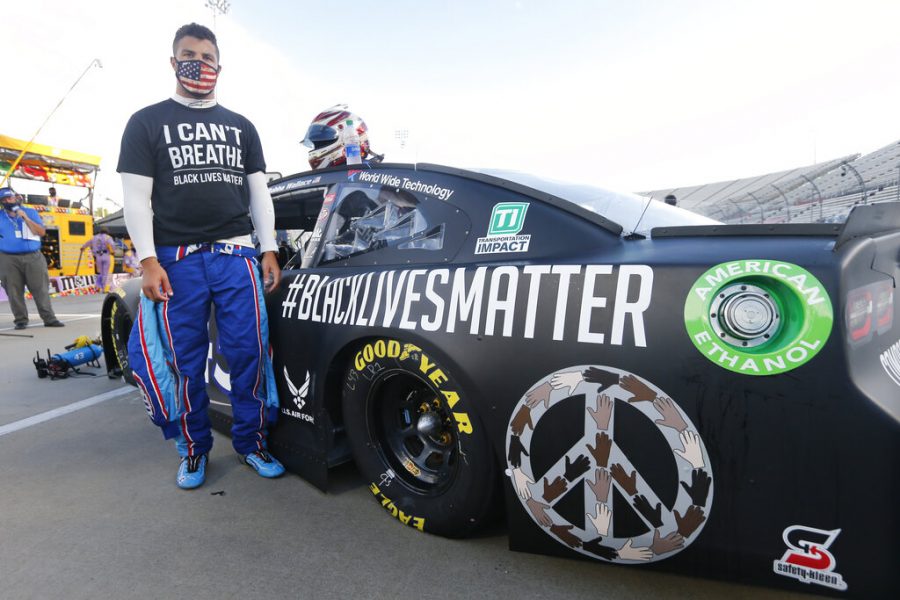 In this June 10, 2020, file photo, driver Bubba Wallace waits for the start of a NASCAR Cup Series auto race in Martinsville, Va. Bubba Wallace now counts Spike Lee and Demi Lovato – his admitted celebrity crush – as those loudly in his corner since he’s become the leader of NASCAR’s push for change. (AP Photo/Steve Helber, File)

The morning of May 26, a day after the death of George Floyd, Darrell Wallace Jr. received a text from his mother, Desiree Wallace, that included “I love you Bubba.”

“I love you Bubba” is a phrase familiar to me. My parents said a doctor that witnessed my birth dubbed me Bubba on account of my weight and my face so fat that I couldn’t open my eyes for the first few days of my life. The parents adopted the nickname for me, and it’s stuck as a term of affection to this day.

Everything else in Desiree’s message to her son is beyond foreign.

“My mom said ‘Good morning,” Darrell Wallace Jr. said, reading his mom’s text message in a June 3 Fox Sports interview. “I pray as a mom of a black son that I never have to hear you crying out ‘I can’t breathe.’ I love you Bubba, and your life matters to me.”

Prior to the past few weeks, Wallace Jr. was most likely a sports figure foreign to even most sports fans. Wallace Jr. himself is foreign to his own sport.

Wallace Jr. is the only African-American driver in the NASCAR Cup Series. Wallace Jr. has won several races in NASCAR’s subdivisions and finished second in 2017’s Daytona 500, the Cup Series’ most popular event.

The uniqueness of Wallace Jr. doesn’t end with his skin. He’s spoken out about dealing with depression and anxiety at points in his life, but fans may just as much identify him with fun moments like him rapping over the radio to his crew or playing catch with fans and drivers during a rain delay.

Wallace Jr. took over driving arguably NASCAR’s most famous car, the number 43. The car is owned by Richard Petty, who himself won a Cup Series record 200 races driving with the same number.

An anomaly of his sport, which itself is an anomaly of any other type of major sports league in America, has been fully adapted and embraced as just one of the other drivers in the field of 40. These past few weeks, he stood out from the group again, in part because of the sport he represents.

In 2013, Nielsen reported that 94%of NASCAR fans were white people and nearly half were over the age of 55. Its largest audience by region with 40% of it’s fans comes is the South, according to a study by NASCAR in 2011.

NASCAR, much like it’s core audience, is mainly stationed in the Southeast. More than half of the Cup races occur in the region; most drivers in the series live in the region, and all but one Cup Series team are headquartered in the region.

NASCAR is as much woven into Southern sports culture as college football, which NASCAR fittingly shares a lot of attributes with. There’s a large tailgate culture with fans camped out at the track for days ahead of a big race on Sundays and it’s grandstands can pack crowds of up to nearly 100,000 people.

What’s equally as woven into Southern sports culture is it’s crossovers with the region’s and arguably the nation’s biggest black eyes. Slavery, the Civil War and segrigationist Jim Crow laws. NASCAR is no exception.

When the aforementioned Scott first met NASCAR founder Bill France Sr. in 1954, France Sr. assured him he would be treated as an equal. Scott’s career would not play out as such.

Scott was considered a shoe-in for the Grand National Series Rookie of the Year Award. Instead, the award went to a driver who ran only five races all year while Scott finished in the top 10 five times.

Scott was initially banned from racing at Darlington Speedway in South Carolina by the track, and thus put an end to him receiving any sponsorship. While France Sr. tried to help other white drivers and teams obtain corporate sponsors, Scott received radio silence.

When Scott secured his first and only career Grand National win in 1963 in Jacksonville, Florida, the race was at first awarded to the white, second place driver by NASCAR out of fear of upsetting the fans in attendance.

Two hours after the fans left, Scott was declared the winner. Two years after the race, the win went into official NASCAR records as the first win by an African-American driver.

In 1972, Scott ran his last race in the Grand National Series at the age of 51. That same year, France Sr. served as campaign manager for former Alabama Governor and segregationist George Wallace’s presidential campaign.

In 2010, decades after both had died, Scott’s family finally received the trophy for his win at Jacksonville.

The image of NASCAR diehards being rednecks who are out of touch with modern society still persists today, despite the organization taking on many efforts to expand the sport globally and field a diverse group of racers.

As recently as April 2020, the racist stigma associated with the sport has popped up again with Cup Series driver Kyle Larson being fired from his team and suspended indefinitely after using the n-word on a livestream.

With the world watching how they would react, NASCAR had only one voice to speak to the effects the word has. That was Wallace Jr.

“That moment set our sport back a lot,” Wallace Jr. said in a June 3 NBC Sports interview. “He knows that, the sport knows that, the fans know that. The ones that are targeting us got what they wanted…I called on us, the drivers and the sanctioning body, to move us past that.”

With its return after a hiatus due to COVID-19, NASCAR has been afforded an opportunity to be on display to a larger audience as the only major American sports league active.

It’s that same spotlight that put them in a position to do something, anything, after the deaths of Floyd and others at the hands of police. Once again, everyone in the room looked to Wallace Jr.

“I don’t know what to do,” Wallace Jr. said in a June 3 NBC Sports interview. “I feel helpless because I’ve been discriminated against. It’s just a sad place we live in where I won’t get accepted because of my skin color.”

Wallace Jr. admits in the same interview, and it’s hard to keep track of them at this point, that he raced with anger for the week after seeing the video of Floyd’s death. Like many Americans, that anger was channelled into action that shook the status quo.

I’ve been attending NASCAR events semi-annually since 2007, most being at the Michigan International Speedway. The stars and bars were always the flag out in full force, waving from flagpoles or sitting on ball caps and t-shirts.

If it’s like that in 2020 at a track 90 minutes from the border of Canada, imagine how it has been for decades before the sport expanded beyond the Southeast. It took one driver with a lot of supporting competitors and fans for NASCAR to outright say ‘No, that’s not welcome here anymore.’

NASCAR was the first sport I ever fell in love with. I would watch races alongside my parents long before I ever even knew who the Chicago Bears, Bulls, Cubs or Blackhawks were; yet it’s always been a passion I’m reluctant to share because of the stereotypes associated with the sport and the fanbase.

It’s those very stereotypes that make what is happening now so incredible. NASCAR, a sport that’s only ever had two full-time black drivers, is taking a stand for inclusion. Inclusion, the very thing its founder helped George Wallce try and fight against less than 50 years ago.

NASCAR and it’s drivers should be applauded for what they’ve done these past weeks, which is to actually take the spoken experiences and advice from their black peers and put it into action. However, no pun intended, they can’t take their foot off the gas.

I can imagine these past few weeks being difficult for black people who are being asked to share and relive their emotions over and over again by white people with the best of intentions.

Now imagine being everyone’s only black peer or competitor while dealing with depression, anxiety and the helplessness of feeling you will never be accepted because of the color of your skin.

NASCAR and its teams need to employ a more diverse group of drivers, executives and employees, both to truly make fans of the sport feel more inclusive and so Wallace Jr. alone doesn’t have to carry the burden of, as he’s said, “the black driver.”