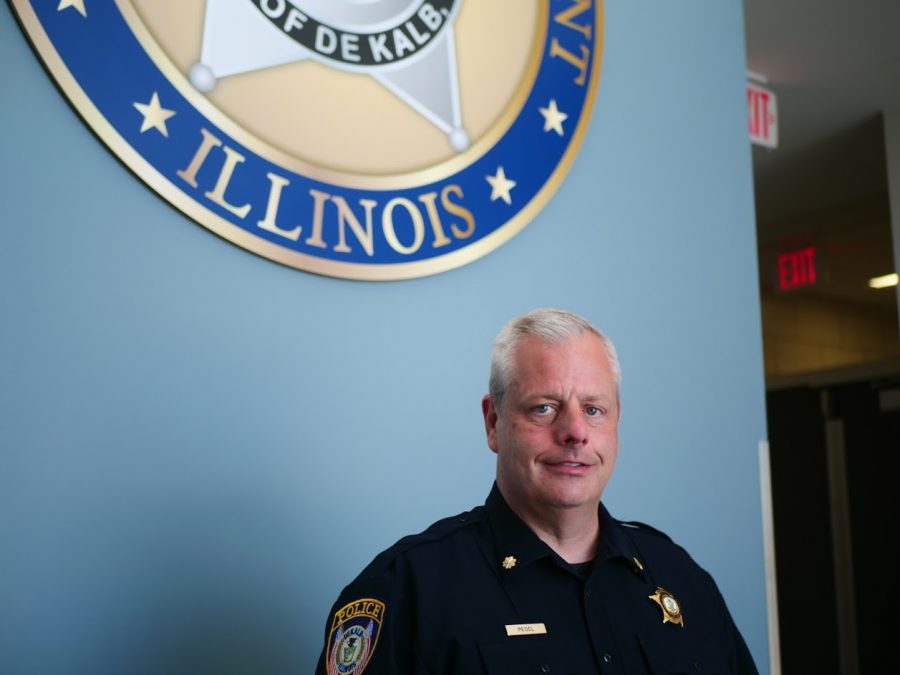 DeKalb Chief of Police Bob Redel stands in the main lobby of the DeKalb police station on Monday, June 15th.

Redel was appointed the interim position on May 26 and took office at 5 p.m. on June 2 after former Interim Police Chief John Petragallo retired after 26 years of service.

Redel said while he’s only in the position temporarily, he hopes he and the police department will be able to adopt the idea of change by talking with community members and finding out ways the department can improve.

“In recent weeks, our community has come together,” Redel said. “There is positive change happening, there is communication going on and I think everybody’s looking forward to the future.”

Redel was appointed by City Manager Bill Nicklas after the search for a new police chief was put on hold due to the coronavirus pandemic. The city was hoping to begin the hiring process of a new chief at the beginning of March, Nicklas said at a May 26 city council meeting.

“I know John joins me in applauding Bob’s tremendous career to this point, along with his fierce determination and dedication,” Nicklas said at the meeting. “We’re very proud of him and very fortunate to have Bob serve in this capacity.”

He grew up in Jefferson Park and later moved to Arlington Heights where he began high school and stayed there until becoming a patrolman in DeKalb.

“When I became of age to become a police officer, I started testing and I got hired in DeKalb,” Redel said. “I never regretted it from day one, I still love the job. I’ve been on it for 26 years and it was a good decision for me.”

Throughout his 26 years at the station, Redel said his experience at the department has trained him for roles like the acting police chief position.

“You learn every day while on the job,” Redel said. “The longer you’re in law enforcement, hopefully, the more you can learn and you just become better for it.”

Redel said while working alongside Petragallo for the last 26 years, they both learned a lot from each other including mistakes and achievements.

Redel said interviews for the position to be permanently filled haven’t started yet but he anticipates they’ll begin soon.