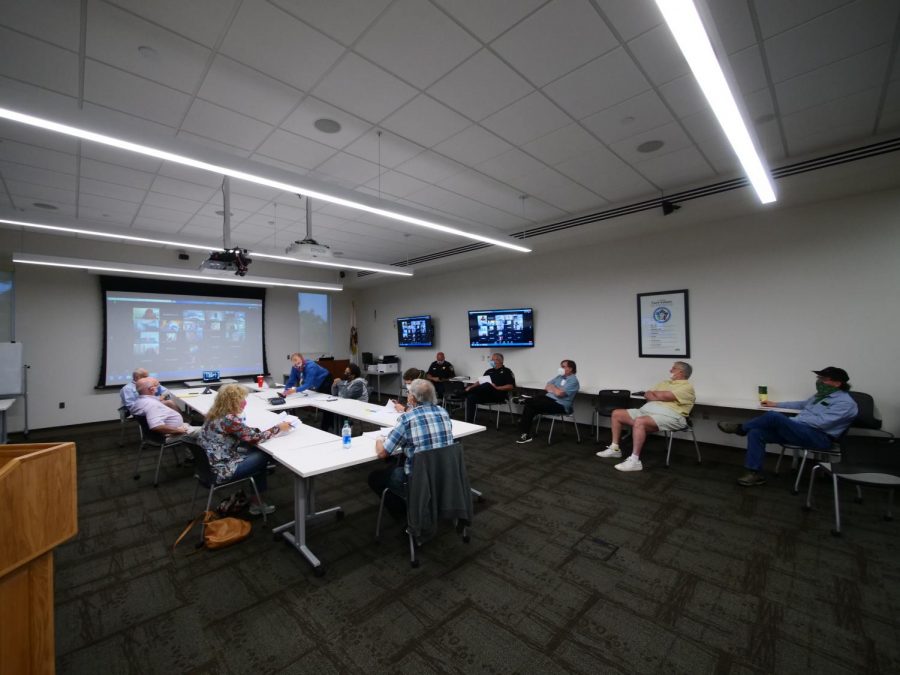 The DeKalb Special Human Relations Commission meets in the training room of the DeKalb police station to discuss police reform with the community on Tuesday, June 16th.

DeKALB — DeKalb community members called on the Human Relations Commission at Tuesday’s special meeting to implement policy change within the police department, however, residents said progress towards change is happening too slowly.

The three-hour-long meeting was attended by over 80 residents via Zoom. Residents gave recommendations to the HRC such as decreasing police funding, creating a citizen-led committee to oversee the police department, improving hiring policies for officers and more.

Calls for police reform have intensified amid the George Floyd protests. Floyd died while in police custody when former Minneapolis police officer Derek Chauvin pinned his knee to Floyd’s neck for over eight minutes.

Toward the end of the meeting, audio from the HRC meeting glitched. While the audio was being fixed, virtual attendees unmuted their microphones and started to voice their frustrations about not having their recommendations heard by commission members.

Many community members wanted action on the recommendations they gave by sending them to the city council so a vote could be taken at Monday night’s council meeting.

“We have to start somewhere, we have to make action somewhere,” DeKalb resident Vivian Meade said. “If we do not start tonight, it will never begin.”

The HRC doesn’t hold any policy-making power but instead makes recommendations to the city council to discuss and vote on, according to the DeKalb HRC website.

Larry Apperson, chairman of the HRC, said the commission will continue to gather community input at the town hall meeting scheduled at 5 p.m. on Thursday at the Hopkins Park Bandshell and at Monday’s city council meeting.

“I just can’t overemphasize how appreciative our commission is that you on this Zoom meeting have taken the time and effort to make suggestions, comments and recommendations,” Apperson said. “This is what we wanted to accomplish tonight.”

Lisa King, a commissioner of the HRC and interim co-director of the CHANCE Program, also wanted swift action on the recommendations mentioned but wanted to ensure community input was included.

DeKalb resident Shrestha Singh said police reforms such as “8 Can’t Wait,” which includes eight policies that could lead to a decrease in police violence, are seen as ineffective in other cities that have adopted the reform.

“What I’m inviting us into is imagining a city, in which, instead of tens of millions of dollars being spent on the police, are actually being spent on meeting folks’ needs, on improving housing safety, education, mental health service and after school programs,” Singh said. “Those are the things that actually create a safe community.”

DeKalb resident Jessica Lyons called for the requirement for the hiring of a diversity, equity, inclusion and accessibility officer. She said the officer should be hired by the community rather than the police department to keep officers accountable for their actions.

“I think as representatives, we may be looking at equality, but we’ve made some major damage and it’s time for some equity and justice and to reallocate those needs into the black community of DeKalb because they are DeKalb as well,” Lyons said.

Maurice McDavid, an assistant pastor at the United Pentecostal Church of DeKalb, is a lifelong resident of DeKalb who recommended a citizens advisory board on police and community relations to be established.

“One of the things that really needs to happen is that there have to be diverse voices and diverse experiences sitting at the table where decisions are made, rather than simply allowing police or law enforcement to investigate themselves and to come to their own conclusions,” McDavid said.

DeKalb Interim Police Chief Bob Redel said the past couple of weeks have been a difficult time for the police department as protests have continued throughout the city.

“There have been some points brought up today that I have not thought about,” Redel said. “I got some soul searching myself to do to see what’s best for this community, see what changes we can make that will make it better for us as citizens.”