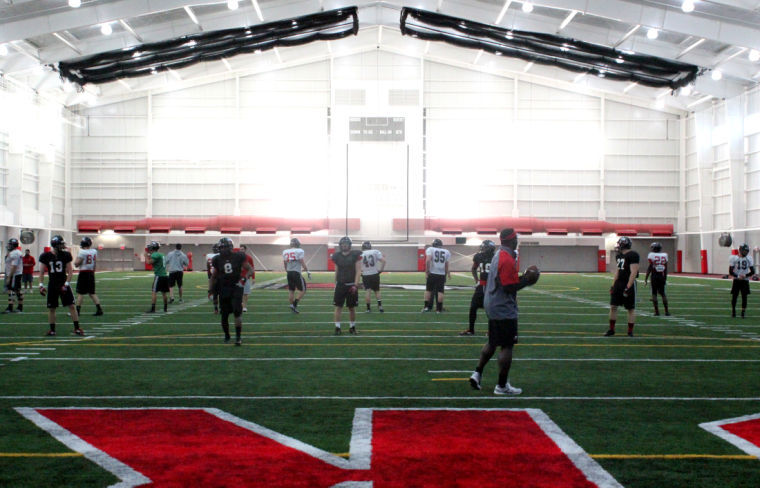 The football team practiced in the newly unveiled Chessick Practice Center Sunday. The facility was opened to the public Saturday. Athletics toured similar facilities throughout the United States prior to the center’s construction so they could see what features they would want at NIU.

DeKALB — The NIU Athletics department was able to have student athletes return to campus June 17 for voluntary football workouts, providing the department its first chance to test its COVID-19 prevention measures.

Associate Athletic Director for Sports Performance Zach Cahill said the operational changes he and his staff made to their training plans had ups and downs in its first week.

“It’s been kind of an operational fiasco I guess you could say,” Cahill said. “But we’ve worked through it. We haven’t had too many hiccups and the training has been good and solid.”

Upon arrival to practices, a student athlete will be screened by the Athletic Training staff for symptoms. Athletes and staff at facilities are all required to wear masks.

What normally would be groups of 20 to 30 athletes or players has been shrunk down to 10. Whenever possible, workouts are being done outdoors. When inside, Cahill said social distancing measures are being taken and the department has extra help to keep equipment sanitary.

“It’s one person to a rack in our weight room, which is really different for us and it keeps everyone socially distanced,” Cahill said. “We have some extra staff, volunteers, interns and ourselves cleaning equipment. If the first group uses the racks, we won’t use them for another hour to mitigate the risk with that.”

Cahill said there’s a new normal not just in the protection of athletes but in their summer training. The sports performance staff has had to take into effect the layoff from intense workouts many players may have faced with the team last working out in March.

“Coming out of this long break, how it’s worked is we’ve kind of had to start from scratch with everybody,” Cahill said. “ These guys have still been active during the break but we eased into it just to be safe. The worst thing we want is a soft tissue injury or a pulled hamstring that would put someone back even further.”

NIU would need to follow newly minted NCAA guidelines that vary from sport to sport and are subject to changes if risk levels drastically change.

For football, a new model for preseason workouts allows up to eight hours a week of weight training, conditioning and film review from July 13 to July 23. The allowed time increases to 20 hours starting July 24 and ending Aug. 6, with walkthroughs and other meetings beyond film review will be allowed.

Frazier said the final call on what can be done in the fall is on the state of Illinois and the city of DeKalb, as their guidelines take priority over the NCAA.

“That’s where it gets a little bit murky,” Frazier said. “The NCAA might say ‘you can do this and you can do that,’ but without sign-off in our state and our institution we can’t do that. That’s probably why we’ll probably get a difference of which states go faster back to competition than others, because everyone has their own individual health and safety guidelines to adhere to.”

Gov. J.B. Pritzker announced Monday that the state will be moving into Phase Four of the state COVID-19 reopening process. New regulations from the state means that soon more athletes from fall teams will be able to join the football team in preseason training.

Cahill said the department has taken some workout equipment from the Yorden Center to make smaller sudo-gyms at other athletics facilities, such as the Convocation Center or around the perimeter of Huskie Stadium.

“Getting into stage four gives us more options for the group size, but it’ll definitely mean a lot of planning and organizing of how we’re going to facilitate it as more teams get back,” Cahill said. “We’re looking to get more student athletes in but just not in the same space.”

More student athletes means even more work for athletic staff trying to keep everyone healthy and everything clean. With the ramping up of training, more challenges could face the department in the coming months.

“We’re going to get it done, it’s just not going to look normal,” Cahill said. “The staff will be training in new environments and we might be restricted by equipment. The frequency and duration of our workouts may not be as long due to our scheduling with our time spent cleaning.”

Despite the challenges, Frazier said seeing the safety protocols in action has given him more optimism that the student athletes will be able to put their training to work with regular competition.

“I do feel better based on our protocol,” Frazier said. “But we need to make sure we keep health and safety a priority for not just the athletes but for those who are servicing our student athletes.”