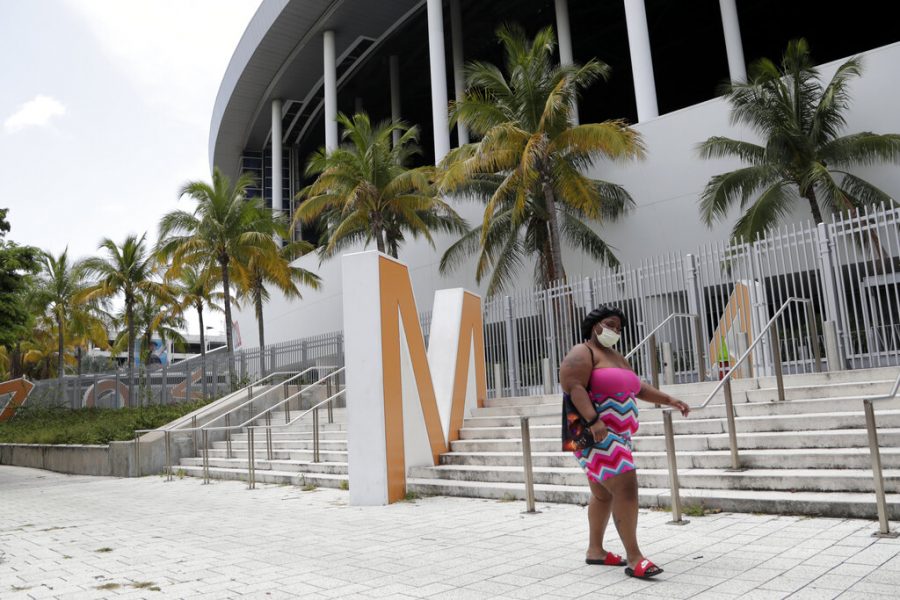 A woman wearing a protective face covering walks past Marlins Park, Monday, July 27, 2020, in Miami. The Marlins home opener against the Baltimore Orioles on Monday night has been postponed as the Marlins deal with a coronavirus outbreak that stranded them in Philadelphia.

DeKALB — Just one week into the MLB season and the league has already canceled a game due to a COVID-19 outbreak. Ken Rosthenal, of the Athletic, announced that the Miami Marlins had nine new cases of coronavirus on Monday.

Before the recent outbreak, the Marlins already had four team members test positive, bringing the number of players affected to at least 13. The outbreak has caused the Marlins to stay in Philadelphia and postpone their home opener tonight against the Baltimore Orioles.

Monday’s Phillies game against the New York Yankees will also be canceled, according to the MLB. They have yet to announce any more cancellations.

Though the Marlins are the first outbreak, other teams have had players tested positive for coronavirus. The Atlanta Braves were forced to activate two catchers for their opening series against the New York Mets.

Catchers Tyler Flowers and Travis d’Arnaud were sidelined after testing positive for COVID-19 hours before Opening Day. Neither traveled with the team, and both stayed at home in Atlanta.

The MLB owners held their weekly meeting today and several owners insisted there were no talks of canceling the season, according to Bob Nightengale of USA Today,

MLB officials also have stated that teams with an outbreak will have more priority testing done.