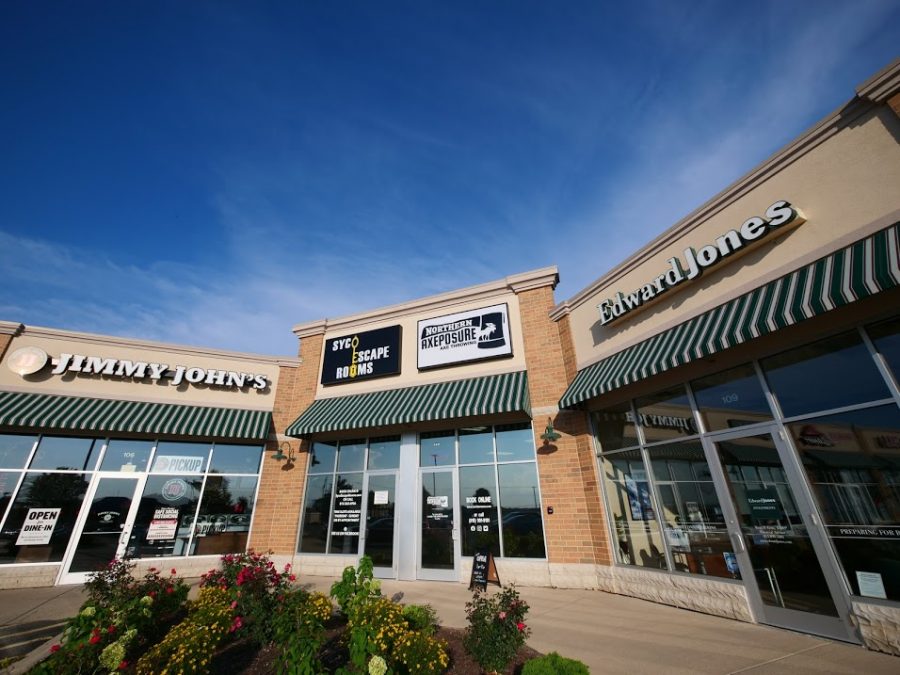 With a powerful throw and a formidable crack, a steel-headed axe meets its target — a wooden bullseye. This sound, commonly associated with the outdoors, takes on a new meaning in the rapidly expanding sport of axe throwing, now provided at Northern Axeposure.

Northern Axeposure, 1170 DeKalb Ave. Suite 108, is a venue where people can engage in the sport of axe throwing. This is “a sport in which the competitor throws an axe at a target, attempting to hit as close as possible to a bullseye,” according to Northern Axeposure’s website.

The business, owned and operated by Stephanie and Mike Gleissner, is composed of seven lanes. Although, due to COVID-19 guidelines, only four can be used at a time, and face masks are required to limit the spread of the virus, Stephanie said.

Lanes can hold two to six people, and closed toed shoes are also required for personal safety. Axes available for throwing weigh 1½ lbs., though 1 lb. axes are available for those who are unable to use or struggle with that weight, Mike said.

Prices to rent a range are $20 per person for one hour, $30 for 1½ hours and $35 for two hours, and bookings can be made on Northern Axeposure’s website or by calling the business at (815) 991-9181. Walk-in rentals are also acceptable, but only if a lane is free. Concessions will sell soda, water, Gatorade and snacks, Mike said.

Not only are patrons instructed on how to safely throw an ax, they are also supervised by employees at an enclosed range that meets the standards of the World Axe Throwing League, Mike said.

The Gleissners are preparing to host a local league where patrons can bring their own axes if they meet the regulations set by the World Axe Throwing League, according to Northern Axeposure’s website. The league will consist of match play for five weeks, with a tournament ending the league in the sixth week, according to Northern Axeposure’s website.

“While the sport is exploding, it’s still relatively new to this area,” Stephanie said. “We want to get people to come here, feel safe and have fun.”

The idea for the business began in October of 2019 when Stephanie and Mike went on a trip to Canada and partook in a game of ax throwing, Stephanie said.

“We had a great time and thought that we could do this,” Mike said.

Based on this “impulsive” decision, as Stephanie said, the pair went to work creating an axe throwing range at the beginning of 2019 and opened for business July 23.

While natives of Genoa, the pair decided to have the business in Sycamore, because of the larger market Sycamore provides and its proximity to Northern Illinois University, Stephanie said.

“They are helping people relieve stress during this [COVID-19] pandemic, and we are excited to have them,” Coates said.

As the 2020-2021 academic year begins at NIU, Stephaine and Mike want to appeal to college students and show that their business can offer a fantastic experience, Stephanie said. During NIU move-in week, a raffle will be held for those who make a reservation for August 28th. Those who show up to the reservation wearing NIU spirit wear will be entered to win a gift card for one free hour of throwing for four (which is an $80 value), Stephanie said. Winners will be notified via email and announced on Northern Axeposure’s Facebook page.

“[Axe throwing] is super fun and provides great stress relief,” Mike said. “After a student takes a hard test, they can come in, throw a few axes and blow off some steam.”

With the minimum throwing age being 10-years-old, with proper adult supervision, Stephaine and Mike want the community to view Northern Axeposure as a family-friendly environment.

“We want to be entertainment, but part of the community as well,” Stephanie said.