J.Royal’s upcoming album will dismantle your guard and open your mind 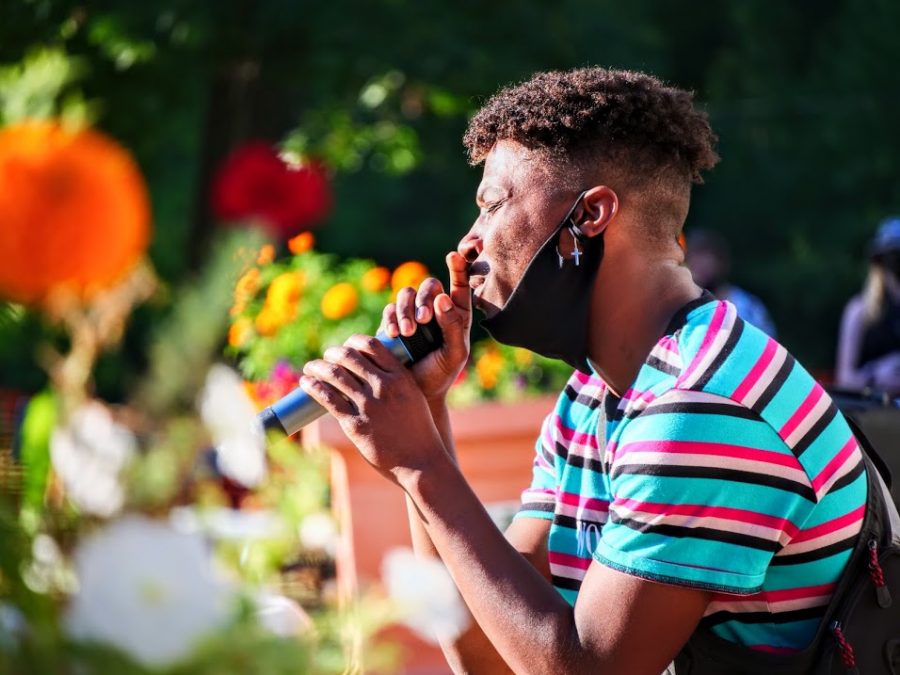 J. Royal performing at An Evening for Black Lives

Emo rapper J. Royal, of DeKalb, is working on an upcoming album in Chicago that will come out by the end of this year. Listeners can expect a fusion of sad and upbeat rap that explores J. Royal’s deepest thoughts, in hopes listeners tap into their vulnerable side comfortably upon pressing play.

At 22 years old, Jeremiah Wright, who goes by J.Royal, has released solo tracks on Soundcloud, and is also one of three in an alternative hip hop band, with some pop elements, called Boy Lavender from DeKalb. The title and release date of his first album as J. Royal is still undetermined.

This project will be a blend of what he wants to say, and what people want to hear, J.Royal said.

He’s encountered a lot in life, he said, and this project will dive into that. The same way J.Royal feels listening to some of his favorite artists’ slow and introspective music is the same way he wants people to feel listening to music he releases.

“I want you to open yourself up to mental illness — the different things we deal with on a daily basis,” he said.

J.Royal thinks we’re finally excelling as a society when we open up the discussion to seek help, and talk about why we feel trapped in our mind on a day to day basis. He wants to create music that people can listen to and use to dismantle their guard. It’s easy to appear numb to situations, but J.Royal believes it’s okay to feel, it’s important to feel, even if it’s in private when the public mask can come off. This album will evoke many emotions, he said.

“In my community, people act hard. Nothing gets to them; they try to move around the world like they are the toughest guy in the room,” J Royal said. While that, for the time being, protects somebody from getting hurt, it gets suffocating. It’s easy to suppress emotions to the point they’re undetectable, but that’s just wack, J.Royal said.

Jia Ruiz, 19, of DeKalb, has been a close friend of J.Royal’s for about a year.  J.Royal has a way of making her see the world in a different light, and keeps a smile on her face in the dark times this world has to offer, she said.

“We’re all vulnerable and we all have issues,” J. Royal said. “[You’re] not less of a man if you have a heart.”

The album was set up to release this summer. There would have been 10 songs, but with the police shootings and protests taking place in DeKalb, J. Royal refrained from dropping anything because he didn’t want to make this time about him and what he’s doing while the people in his community were hurting and fighting.

At An Evening for Black Lives on Aug. 21, J. Royal performed some of his sadder songs to match the serious tone of the event. One song he played was “World on Fire”, because although it’s not lyrically deep, it holds meaning in relevance to the events in America.

Right now the world feels on fire, but “at the end of the day, it won’t stop turning for anyone,” J. Royal said. “We have to join the revolution because the world will keep turning although it’s burning.”

Seeing J.Royal pour his heart out to the community and show what he’s capable of making someone feel through his voice made Ruiz tear up, she said. “His efforts to not only have people hear his art but to feel his art was finally put into play.”

Royal has been a writer since he was 9 years old. Growing up with an older brother who was a street battle rapper in Chicago, J.Royal wanted to write too, so he tried poetry. At 15 he made his first song. As a teenager, throughout the ages of 15 to 17, J.Royal wasn’t quite secure with releasing music because he didn’t know if people would like it. It was a very vulnerable act to release something so raw and personal. At around 18, after hearing positive reviews from close friends and classmates, he chose to let those out shine the critics, and he decided to pursue it.

The name J.Royal originally started out as a joke at age 10. Wright would call himself royalty as a joke to his family. But what started as a joke now holds meaning, as it reminds him of his roots — where he came from — no matter where music might take him.

Starting Boy Lavender in 2018 opened J. Royal up to different possibilities for his sound in music. He mainly focused on lyrical integrity, spoken word raps in his rap career, before the band, but after meeting Ian Panke, another member of the band, he was able to unlock the melodic rap side of him, he said.

Melodic rap is different from rap, J.Royal said. While rap is more poetry, a straight verse of spoken word that is moving or uplifting, melodic is up and down and all around. He prefers this style, because he’s able to manipulate his voice with different sounds. His vocals become a part of the song, and the lyrics intertwine with sounds and beats that he chooses best fit the vibe of the song.

Darius Brown, J.Royal’s 25 year old producer, met J.Royal in college when he was a senior and J.Royal was a freshman.

J.Royal never told Brown he was pursuing music, until he showed Brown his song “Stuck in My Ways” on Soundcloud. “I found myself listening to it three to four times a day,” Brown said.

Brown would mess around with beats for fun, but never took himself seriously until J.Royal told him he should try to. “We linked up every weekend possible and made music together for months straight, ” Brown said.

Brown and J. Royal have been working together for about a year now, and have done 10 songs together, although J.Royal will end up keeping two or three. Working together, Brown will show J.Royal instrumentals he’s created and if he likes it, they record the song. Brown will also assist with the mixing and mastering of the song after it’s recorded.

“He goes for a very distinguished sound and sometimes I don’t even pick up on exactly what he wants,” Brown said.

In a year J. Royal wants to see himself performing songs from his upcoming album in the Chicago area with a few music videos out as well.