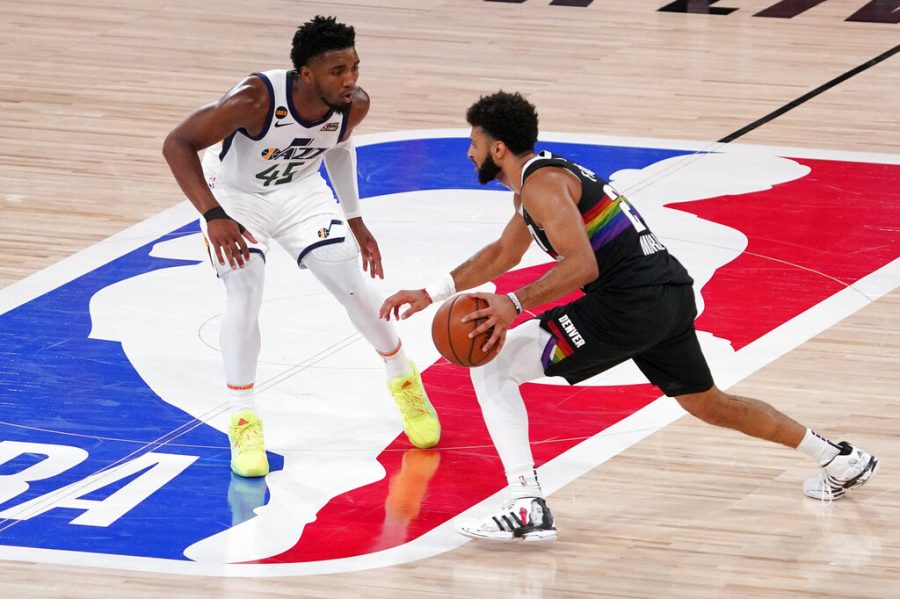 With the heart-breaking Game 7 elimination of the Oklahoma City Thunder, the surprisingly competitive first round of the NBA Playoffs in the bubble is finally over.

The Houston Rockets join the Denver Nuggets, Los Angeles Clippers and Los Angeles Lakers of the West, and the Boston Celtics, Miami Heat, Milwaukee Bucks and the defending champion Toronto Raptors of the East in the Conference Semifinals.

The first round saw many highs and lows for several players and teams beyond losing and winning series. Here are some surprises, some concerns and flat-out disappointments from the first round.

The NBA has no shortage when it comes to young talent, which was on full display in the Nuggets and Utah Jazz’s seven-game series. Jazz guard Donavan Mitchell and Nuggets guard Jamal Murray quickly became focal points of the series, posting stat lines only seen in NBA 2K night in and night out.

The pair became the first players since Michael Jordan and Allen Iverson to register multiple 50-point games in a series, according to an article from USA Today. Mitchell had 57 points in the Jazz’s Game 1 loss to Denver, who now only sits behind Jordan and Elgin Baylor for the most points scored in a playoff game. Mitchell is just 23 years old.

In the Nuggets’ Game 4 loss, Murray set a franchise record for points in a postseason game. Game 4 was also the first time in NBA history where opposing players scored at least 50 points.

It was a bit of a coming-out series for Murray, as the 23-year-old led his team in scoring. Murray has lacked consistency in the past, but this series showed his potential as a true star behind Nuggets center Nikola Jokić.

No one thought they’d be in the playoffs before the season started. Few thought point guard Chris Paul would remain on the Thunder’s roster the entire season. In fact, prior to the start of the season, ESPN gave the Thunder a 0.2% chance of even making the Playoffs. The fifth-seeded team ended up taking the Rockets to seven games before falling 104-102 in a nail-biter.

While it’s not the result OKC wanted, the team should be proud of the effort it gave all season, especially in the Playoffs, after coming back from being down 2-0 in the series. The 35-year-old Paul led a young team built from the remnants of the Russell Westbrook era. The Thunder had previously traded away Westbrook and superstar forward Paul George prior to the start of the season.

Former two-way contract player Luguentz “Lu” Dort dropped 30 points in a spirited performance during the team’s Game 7 loss, proving to be a potentially-promising young player for the Thunder.

Ironically, the Thunder faced off against the Rockets’ Westbrook, arguably the all-time greatest player in Thunder franchise history and fan favorite. It was also a potential revenge series for Paul, who left Houston on bad terms after the trade for Westbrook.

Sadly for Paul and the Thunder, it will likely face a complete rebuild this offseason, as the team has reached its ceiling with the veteran guard at the helm.

What can you say that hasn’t been said already about the Dallas Mavericks’ Luka Dončić? The 21-year-old point forward took the NBA’s title-favorite Clippers to six games; on a sprained ankle; without star forward Kristaps Porziņģis, who tore his meniscus during Game 3.

Dončić had already reached superstar status in his second season prior to the NBA bubble, leading the Mavs to their first playoff series without some player named Dirk Nowitzki on the roster since 1990. Dončić has been so good, the Ringer’s Bill Simmons dubbed him simply “Luka” during an episode of his podcast.

This series separated Luka from his peers, putting him in line with stars like LeBron James, Magic Johnson and Larry Bird: players that found success or had significant Playoffs moments early in their careers, who are commonly considered among the greatest to ever play.

His fadeaway buzzer-beating 3-pointer in Game 4 that tied the series at 2-2 was a massive shot, especially for a player of his age. The only downside to the moment was that it didn’t happen in Dallas in front of thousands of screaming fans. Both parties were robbed of the moment.

It’s the seventh season of “The Process” — the Philadelphia 76ers’ ultimate strategy to build a winning team. The last three seasons have seen the Sixers reach the playoffs. They made the Conference Semifinals in 2018 and 2019, but never made it to the Conference Finals. This time around, they were swept by Boston.

Joel Embiid, arguably one of the most talented centers in the last 20 years, looked helpless at times during doomed series. He did not have the ball in his hands enough, partly due to his lack of aggression or effort.

Head coach — I’m sorry, former Head Coach Brett Brown, who was just fired, failed to make proper adjustments throughout the series. While the Sixers were missing star point guard Ben Simmons who was out due to a knee injury, the series should have at least gone beyond four games. Boston was even a little short-handed, as Gordon Hayward suffered a Grade 3 right ankle sprain during Game 1, according to ESPN.

Clearly the Embiid-Simmons experiment hasn’t worked the last few seasons, as their styles of play do not compliment each other. It’s time for Philly to move in another direction beyond coaching.

After Game 4 of its series against Miami, the Indiana Pacers were sent home from the bubble. Head Coach Nate McMillan returns home looking for a new job.

Yes the Pacers were swept, but this sweep did not warrant costing McMillan his job. The Pacers were already short-handed without All-Star forward Domantas Sabonis, who left the bubble prior to the restart to treat plantar fasciitis in his foot, according to a July 24 ESPN article.

Star guard Victor Oladipo hasn’t been at 100% either, as the former All-Star continues his return to form after missing parts of the last two seasons due to a ruptured quad tendon.

McMillan has proven to be an excellent coach, especially when it comes to player development. Oladipo, Sabonis, Malcolm Brogdan and T.J. Warren have blossomed into rising stars under his watch, and minor players like Doug McDermott and Justin Holiday have carved out important roles in his system. He compiled a winning record of 183-136 in four seasons with Indiana.

With teams like the Sixers, Chicago Bulls, New Orleans Pelicans and potentially the Rockets in the coaching market this offseason, the Pacers will have a lot of big markets to compete against for the top available candidates.

No Clippers vs Trail Blazers series

While a potential Clippers-Lakers series is likely the most favorable and anticipated matchup this season, one featuring the Portland Trail Blazers and the Clippers would’ve been interesting too.

Portland’s performance against the Lakers may not have convinced you of this but hear me out: in a perfect world where Portland would have plenty of rest before the series and Damian Lillard is perfectly healthy, it’d be something to spectate.

Lillard was the MVP of the NBA bubble’s regular season, thanks in part to the absolute tear he went on in the final three games of the regular season, scoring 51, 61 and 42 respectively, willing the Blazers into the Playoffs. That three game string comes right after the team’s Aug. 8 game against the Clippers.

Lillard went to the line with 18.6 seconds left with a chance to put Portland up one as they trailed 118-117. He proceeded to miss both free throws, leading to Patrick Beverley mocking his “Dame Time” moniker, and Paul George waving him goodbye as L.A. handed Portland a 122-117 loss, according to an Aug. 8 ESPN article. This led to some “beef” on Instagram.

We saw what Lillard did after the loss to the Clippers, so imagine what he would do in a series against Beverley and George. Sadly fans will never know.

George is not off the hook just yet. The six-time All-Star was horrendous in the Clippers’ opening round against the Mavs.

The Clippers’ second superstar player averaged a mere 18.5 points per game on 35.8% shooting from the field and a measly 27.5% from behind the arc. Without his 35-point outing in Game 5, those numbers would be far worse.

The series could’ve been wrapped up in four or five games, but George’s poor play on the offensive end dragged the Clippers down. “Playoff P” quickly became “Pandemic P,” but luckily for George, he and the Clippers have time to figure things out in the next round.

George cited his current mental state as the reason for his inconsistent play in the bubble during his Game 5 postgame interview, according to Sports Illustrated. Here’s to wishing for an improved Clippers team in the next round, and an improvement in George’s mental health.

Ignoring their first two games against Miami in the second round, the Bucks have looked like a completely different team. Antetokounmpo has had problems closing out games in the fourth quarter. Khris Middleton, the team’s number two star, has looked anything but. In the bubble’s regular season, they won three out of eight games.

The Bucks dropped Game 1 against the Orlando Magic before picking up the gentleman’s sweep in five games, but the wins weren’t always convincing. The bubble has made it clear that when the Bucks are down coming into the fourth quarter, Giannis and Middleton can’t be relied on to bring them back from the brink. Antetokounmpo’s style of play makes it difficult for his team to close, lacking a reliable three-ball. Middleton is just flat-out inconsistent on offense.

However, if you’re superstitious, the team that lost to Orlando in Game 1 of the first round last season won the NBA Finals.

While I understand the unfortunate direction the NBA is heading in terms of small-ball lineups, the Rockets use this strategy to a fault.

Playing P.J. Tucker, the 6-foot-5 forward as a center is bold. When it works, it works, however it’s hard to imagine this strategy holding up against the Lakers in the second round. The Lakers boast tons of talent in their frontcourt, with superstar Anthony Davis, former All-Star Dwight Howard and two-time NBA Champion JaVale McGee.

While Howard and McGee will likely see less playing time due to the Rockets’ small ball lineups, Davis will be on the court for most of the game. Davis is the Lakers’ leading scorer, and one of the best players in the game. Nearly anyone the Rockets throw at the seven-footer will be a mismatch.

After dealing center Clint Capela to the Atlanta Hawks ahead of the trade deadline, the Rockets are without a legitimate center with the size to check Davis that is worthy of seeing playing time.

Tyson Chandler, the 37-year-old former All-Star, has only appeared in 26 contests for the Rockets, averaging under 9 minutes a game. He hasn’t seen the court since Feb. 9, appearing for literally 1 second in Houston’s loss to Utah, according to Basketball Reference. It’s hard to imagine Chandler playing any minutes against the Lakers. The other options are forwards Robert Covington and Jeff Green, but they too are undersized players the Rockets like to call “centers.”