NFL Recap Week 1: Mix the old with the new 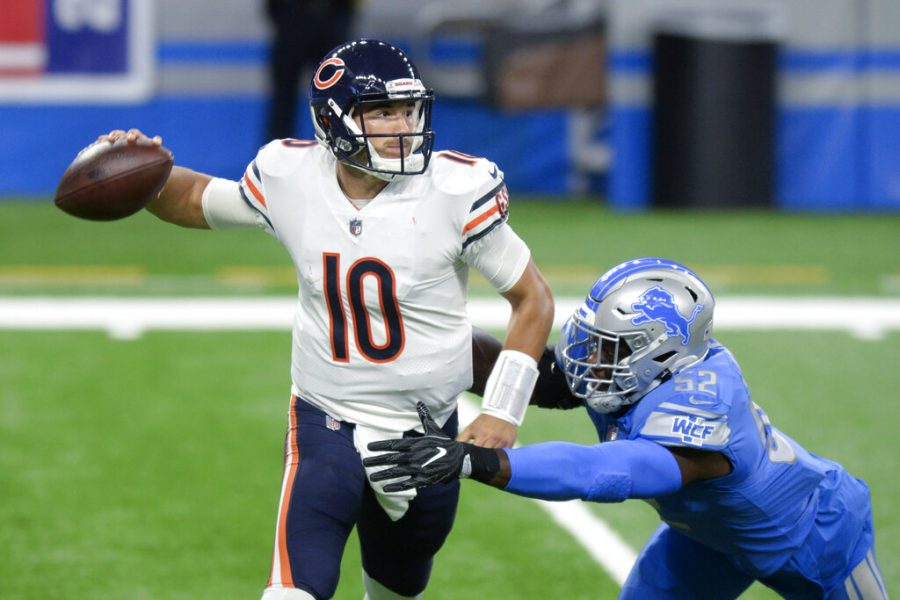 Chicago Bears quarterback Mitchell Trubisky (10) throws under pressure from Detroit Lions outside linebacker Christian Jones (52) in the first half of an NFL football game against the in Detroit, Sunday, Sept. 13, 2020.

This column will be the first in a weekly series by James Krause following the NFL season.In an ad featured throughout many of the league games this week, the NFL featured snippets of the Hall of Fame speech of former running back LaDainian Tomlinson.

The ad is 90 seconds long, and in between the images meant to tug at the heartstrings and the reactions it drew from people, the first line of the speech is all I think it needed.

“Football is a microcosm of America,” Tomlinson said.

The words should be hung from the rafters of every stadium the sport is played in. LT’s words have never been more true and needed to be shouted so loudly than now. If you put a mirror up to the sport of football at any point in its history, America will be staring back at it, matching scar for scar and wrinkle for wrinkle.

In the eight months since the NFL’s last game at the Super Bowl, America felt every form of low it can without sinking into the center of the Earth. Americans, whether catching the virus or losing a job or watching the downward spiral of death and depression that is the daily news, have all been wondering what comes next and what will change.

Millions of Americans turned their TV’s on to watch the NFL this weekend, and they found themselves looking into a mirror.

With the coronavirus cancelling preseason games, Week 1 of the NFL season was the first time all 32 teams looked across from each other and saw someone in a different uniform with no film to clue them into what they were attacking with.

There’s no rehearsal for rookies, no ice breaker for players on new teams and no practice exam for head coaches getting their first test with new teams.

There were, in the case of all but two games this weekend, no fans in attendance to amplify a simple game into a sport that some consider a religion. They had to make their own while adapting to playing in empty concrete collusiums.

The NFL teams entered the weekend with the same missing elements Americans have spent the last few months figuring out. How do you reach a goal without preparation and energy?

I feel terrible for these players and the worry that must have carried. Then again, we’ve all carried that feeling for months now. We’ve all seen what chaos it can be to get everyone on the same page and we know now how exhausting it is to try.

The only difference is we don’t get three timeouts each half of the year. Life has been for many what the NFL’s opening week was. A baptism by fire that boiled everything down to basics.

It’s fair to say many teams will be in the feeling out phase of the season for a while, though they might be done and look up to see the season is half gone.

Teams are having to relearn the simple all over again.

For the Philadelphia Eagles, who gave up 27 unanswered points in their loss to the Washington Football Team, it’s to play a full 60 minutes.

For the Las Vegas Raiders, who matched up with the Carolina Panthers in almost every category and came out with a 34-30 win, it’s limiting your mistakes.

As for the Jacksonville Jaguars, who upset the Indianapolis Colts Sunday thanks to Garner Minshew’s 19-for-20 passing day, it’s keeping it simple.

Who is going to figure out football in 2020 before everyone else? Who knows, maybe some team already has.

Rich get richer: the AFC’s best offenses are only getting stronger

The Baltimore Ravens and the defending Super Bowl champion Kansas City Chiefs represent the two best offenses in the AFC in 2019, with no team touching their explosive but different approaches to scoring.

In their opening games this weekend, both unveiled the new attachments they’ve added to their football Death Stars.

The Chiefs beat the Houston Texans in the season kickoff game Thursday night 31-20, with rookie back Clyde Edwards-Helaire out of LSU rushing for 138 yards and a touchdown. The Chiefs other three touchdowns came from what seemed to be just another night at the office for star quarterback Patrick Mahomes.

The same thing could be said for defending league MVP and Ravens quarterback Lamar Jackson, who threw for three touchdowns in Baltimore’s 38-6 shellacking of the Cleveland Browns. The other two touchdowns came from debuting Ohio State rookie back J.K. Dobbins.

If consistent performances come from Edwards-Helaire and Dobbins as their careers progress, the Chiefs and Ravens could potentially take their offenses and send them flying beyond the league and any offensive records in their wake.

Under the Mitchell-scope: If Trubisky didn’t have your attention before, he does now

Chicago Bears quarterback Mitch Trubisky probably entered Sunday’s game against the Detroit Lions under the most scrutiny of all quarterbacks in the league. Trailing by double digits with 2:29 left in the third quarter, Trubisky sat at 9-for-22 and 110 yards passing.

Between being picked second overall in 2017, a disappointing third season, having a former Super Bowl MVP on the bench and his team saying they probably aren’t bringing him back next year, Trubisky’s career as an NFL starter seemed like a powder keg ready to explode at the next bad pass or interception.

Trubisky then went 11-for-14 and threw three touchdowns to finish the game and help the Bears comeback for a 27-23 win, their first opening week win in seven years.

It wouldn’t be honest to say that Trubisky’s fourth quarter was enough to disqualify his bad play in the first 45 minutes, plus the Bears got help from some late Lions mistakes. Detroit running back D’Andre Swift had a potential game-winning touchdown fall out of his grasp with just six seconds left.

Still, the clutch performance is something to springboard off of for Trubisky, who is potentially the most interesting quarterback to follow this season.

Brees and his team picked up the 34-23 win Sunday, but didn’t do so behind their normally dangerous air raid offense. With only 160 yards, it’s the fewest yards Brees has had on at least 30 attempts in seven years.=

Brady looked out of sync at times with the team he joined this offseason after nearly two decades with the New England Patriots. Brady threw for two interceptions, including one pick-six to start the second half.

The addition of Brady doesn’t seem to be helping the team’s biggest issue: discipline. The Bucs were the most penalized team in the league last year and matched the Cardinals and Jets for most fouls in Week 1.

One thing the Bucs know for certain is they will be a tough team to run against, holding New Orleans to 82 yards rushing. The pressure is now on Brady and coach Bruce Arians to get the offense to mature fast if Tampa Bay wants to contend for the NFC South title.

It’s a new day in New England, but it’s the same old Bellichek

The relationship seems to be starting on the right foot, literally. The Patriots ran 42 times in their 21-11 win over the Miami Dolphins Sunday, gaining a sliver of redemption from their upset loss to close last year’s regular season.

Among the many things that has made Belichick a coaching phenom, the one that has been consistent throughout his time at New England is his ability to build a gameplan behind his team’s best tendencies. It’s no surprise that Belichick has adapted an offense to get the most out of his star studded backfield, the question is can he get the same success out of his team as he has in the past.

In an NFC North shootout, the Green Bay Packers beat the Minnesota Vikings 43-34 thanks to four touchdowns and 364 yards from quarterback Aaron Rodgers in arguably the best quarterback performance of the week.

Rodgers seemed lost in the shuffle of rising stars like Mahomes and Jackson last season, but he still helped lead the talented Packers offense to the NFC championship game.

The Packers have offensive weapons surrounding Rodgers, but after allowing 34 points the pressure in Green Bay will be on a defense that lost linebacker Blake Martinez this offseason to keep up.

To get over the hump and reach his second career Super Bowl, Rodgers will need to make sure he has the ability to have performances like this deep into the season.