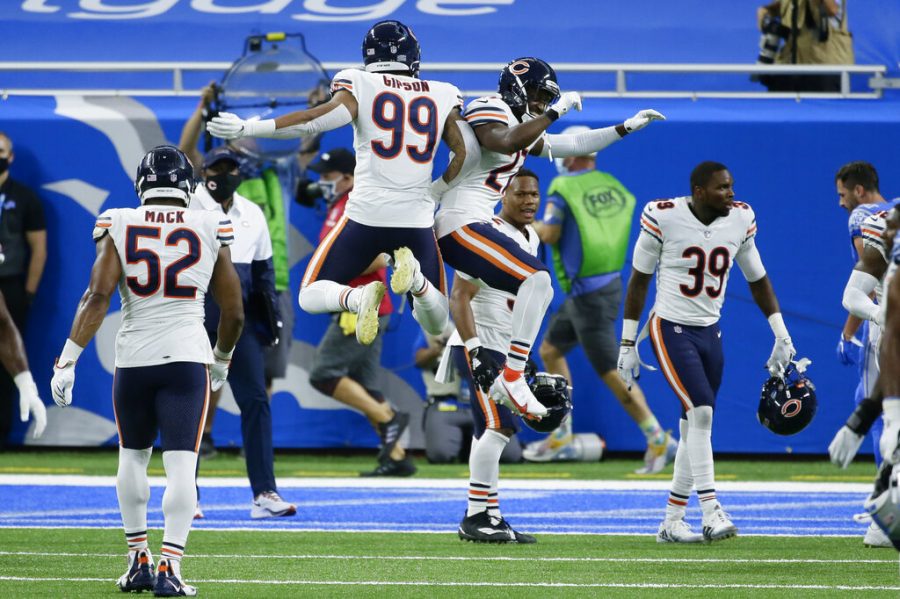 Chicago Bears' Trevis Gipson (99) and Sherrick McManis (27) celebrate their 27-23 win against the Detroit Lions after an NFL football game in Detroit, Sunday, Sept. 13, 2020.

Week one of both the NFL and most major NCAA conferences are in the books. It was exciting to watch football on national TV again. Football on TV restored a sense of normalcy I was lacking these last few months, along with a little bit of extra spending change from the winnings the weekend before.

Last week, my record was above .500 in total. Finishing with a week one record of 4-2, with two games being pushed to a Sept. 26 kickoff. On NFL Sunday, I went 2-2, taking wins in the Packers outright win over Minnesota, and Chicago’s upset victory over Detroit, which counts as a win when betting Against the Spread. I can admit, I was wrong in picking Tampa Bay to win easily against a talented Saints team in New Orleans, and the heartbreaking loss the Bengals suffered against the Chargers will not be forgotten.

For the Saturday college slate, both favorites did what they needed to do. North Carolina came on hot in the second half to separate themselves over a weak Syracuse team, and the Fighting Irish won a conference game.

What week one of college football Saturday taught us was two things: One, the Big-12 is currently a one man powerhouse with the Oklahoma Sooners. Kansas’ embarrassing loss to an average mid-major conference team in Coastal Carolina and Iowa State’s shocking loss to Lousinana-Laffeyete puts a black-eye on the Big-12s stature as a conference.

For a second straight week, the format is four NFL games and four NCAA FBS games. Can week two give the same amount of excitement and opportunity as opening weekend? Tune in between Thursday and Sunday to these games and as always gamble responsibly.

Cincinnati Bengals (+5.5, +215) vs. Cleveland Browns (-260) – Thursday 7:20 p.m. NFL Network: For the second straight week, the Bengals make an appearance as one of the non-local selection games, but the appearance is not just because I am so high on Bengals quarterback Joe Burrow. After Sunday’s heartbreaking loss to the Chargers, Cincinnati drew its in-state rival in Cleveland. The headline of this match-up is a tale of two first round draft picks. Quarterback Baker Mayfield, drafted first overall in 2018, for Cleveland and Burrow, drafted first overall this past year, for the Bengals.

Mayfield did not look good in his season debut for the Browns, completing 21 of 39 passes, throwing an interception and ranking last in yards per attempt at 4.8 yards according to ESPN Fantasy. Mayfield’s inability to generate long passes downfield could prove costly during the season.

Meanwhile, Burrow completed 23 of 36 passes for 193 yards, one rushing touchdown and an interception. Burrow showed promise in his NFL debut, especially in that final drive, moving the ball down the field to the 3-yard-line only to have his kicker miss a chip-shot field goal to force overtime.

Both teams have weapons. The Browns have Odell Beckham Jr. and Jarvis Landry at receiver. While Cincinnati has receivers A.J. Green and Tyler Boyd. Call the offensive match-up a push, but the Cleveland defense has the edge in this matchup, with defensive end Myles Garrett and a blitz heavy scheme Burrow will again need to get the ball out fast to avoid costly sacks. With that being said though, Burrows ability to handle LA Chargers defensive end, Joey Bosa last week showed huge poise in the rookies ability to rise to the occasion. I think the Bengals have an edge. Cincinnati wins this game outright over its in-state rival.

Detroit Lions (+235) vs. Green Bay Packers (-6.5, -290)- 12:00 p.m. Sunday on Fox: The Packer’s accomplished something last week that quarterback Aaron Rodgers hasn’t been able to accomplish in the past 5 years; beat the Minnesota Vikings on the road. Rodgers did this by lighting up US Bank Stadium for 364 yards and 4 touchdowns. Rodgers was a bad bad man on Sunday, with the help of receivers Davante Adams, Allen Lazard and Marquez Valdes-Scantling. Not to mention the running back duo in Aaron Jones and Jamaal Williams. This looked like the Packers offense of old. Expect a similar showing against a very weak secondary in Detroit, who allowed 3 touchdowns through the air against Bears quarterback Mitch Trubisky Sunday. This game shouldn’t even be close. Rodgers continues to return to “bad man” status and the Packers start the season 2-0. Packers win big over the Lions.

New York Giants (+200) vs. Chicago Bears (-5.5, -245)- 12:00 p.m. Sunday on CBS: Let me get this statement out of the way. Last week, Mitch Trubisky looked like a sericable first round quarterback. The Bears ran an offensive scheme that played to Trubisky’s strengths of running bootleg passes and short crossing routes. Trubisky threw for 3 passing TDs and 242 yards, completing 55% of his pass attempts. There is no denying he had a good performance in week one. The issue with the Bears though is understanding what QB is going to show up? If it’s the Trubisky of last week; the Bears should rout the Giants. If it is the Trubisky of last season… Well lets just say that Giants running back Saquon Barkley and receivers Sterling Shepard and Darius Slayton might have a better chance of claiming some spoils. I think the Bears end up winning this game, but not in convincing fashion. I’m picking the Giants at 5.5 points Against the Spread.

Washington Football Team (+6.5, +235) vs. Arizona Cardinals (-290)- 3:05 p.m. Sunday on Fox: a battle between two second year quarterbacks. Both Kyler Murray and Dwayne Haskins Jr. are in their sophomore seasons in the NFL and both are 1-0 to start the season. The Cardinals added to a versatile offense during the offseason trading for wide receiver DeAndre Hopkins, and adding running back Kenyan Drake to the backfield. With a dual threat QB behind center, the Cardinals could be a true threat in the NFC West. As for Washington, the team is still in a large rebuilding and development stage. Besides having receiver Terry McLaurin as a proven target, the rest of the roster has not proven to be consistent during need situations. Expect Murrary and the Cardinals to win convincingly. I’m taking the Cardinals outright by 2 scores.

Louisiana-Lafayette Ragin Cajuns (-17.5) vs Georgia State Panthers- 11 a.m. Saturday on ESPN 2: We’ve got ourselves a mid-major match-up this week on the bet slip. After the Ragin Cajuns stunned the Iowa State Cyclones at home, it’s hard to bet against one of the best teams in the SunBelt Conference. The Cajuns are currently ranked 17th in the AP poll and with the limited number of teams competing in the FBS this season, the Cajuns are looking to be the first team from the SunBelt to go to a New Year’s Six bowl game. Ride the hot hand and strap in for another fun Saturday afternoon. Louisiana-Lafayette by 19.

Tulsa Golden Hurricane vs. Oklahoma State Cowboys (O/U 66.5, -105)- 11 a.m. Saturday on ESPN: The Cowboys open up their season against in-state neighbor Tulsa. The Pokes have the chance to redeem the Big-12 and build upon their stock from last season. OSU has it’s top two offensive weapons returning this season in quarterback Spencer Sanders and Heisman hopeful running back Chuba Hubbard. Last season Sanders and Hubbard were responsible for over 2000 yards of offense each which is good in a league that is not really known for playing tough defense. Expect the Cowboys to handle business this saturday in Stillwater. Take the over on this game, you won’t be upset.

UCF Knights (-7.5) vs. Georgia Tech Yellow Jackets (+225)- 2:30 p.m. Saturday on ABC: No one expected the Yellow Jackets to beat Florida State last saturday, but the triple option offense prevailed and Tech comes home to face one of the best mid-major schools in the last 5 seasons. UCF has been a model of consistency for a mid-major program. Though suffering a bumpy season last year, going 10-3 overall, the Knights seem to be shooting for the stars this year, looking to become the first team from a mid-major, group of 5, to qualify to the College Football Playoff. Though this year brings a new issue for the Knights, as 10 players, which includes 2 starters, have opted out of playing this season due to COVID-19 concerns. Can the Knights depth step-up against such a unique offensive style? I’m picking the Knights to win by 2 scores.

Appalachian State Mountaineers vs. Marshall Thundering Herd (O/U 59.5)- 2:30 p.m. Saturday on CBS: Yes, I know another SunBelt game? I understand your shock, but until the SEC kicks off on Sept. 26, this is the time to highlight the best of the mid-major programs. App St. is just that; one of the best. The Mountaineers finished last season at 13-1, claiming itself a Sun Belt Conference title. This season, the Mountaineers look to do the same, but they will have to go up against Conference USA powerhouse Marshall. Like with any mid-major match-up it’s hard to confidently pick a winner, so I suggest putting your money on the over-under line which can be just as fun to watch as a fan. Last season both these two teams were used to scoring 27+ points and fighting out one touchdown margin of victories, that is the formula for picking the over, but at 59.5 points, be safe and take the under.