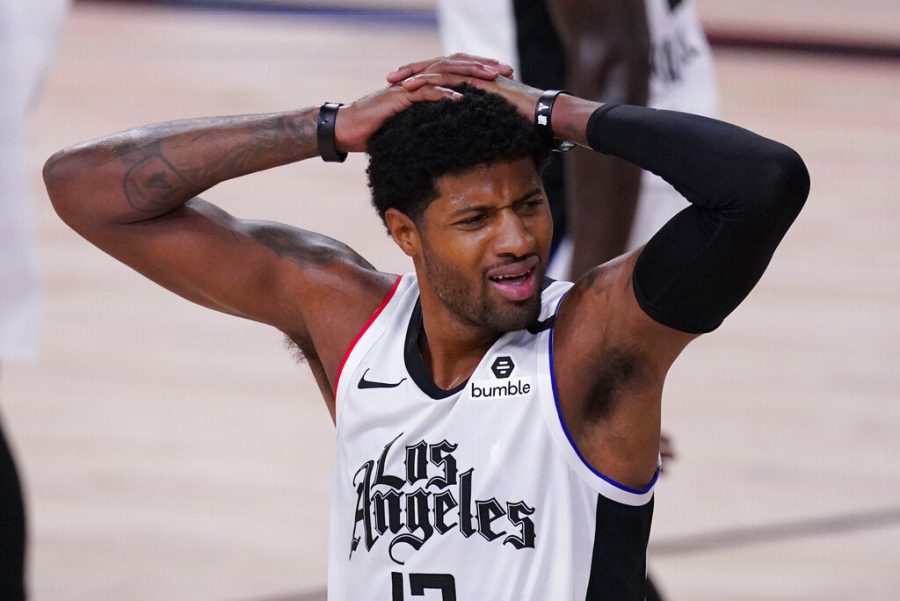 Los Angeles Clippers' Paul George (13) reacts after being called for a foul during the first half of an NBA conference semifinal playoff basketball game against the Denver Nuggets, Wednesday, Sept. 9, 2020, in Lake Buena Vista, Fla.

NBA basketball has clearly been affected by the events of 2020. No physical fans, the Playoffs being held at a bubble site, you name it — it’s been an unprecedented season. Well 2020 worked its strange magic in the second round, as many had their playoff brackets busted.

To start, for the first time in NBA history, the Eastern Conference Finals won’t feature a one or two-seeded team, the fourth time since 1984, with the Milwaukee Bucks and Toronto Raptors losing their series, according to a tweet from ESPN. Also, the fifth-seeded Miami Heat became the lowest seed since the 1998-99 New York Knicks to reach the ECF.

Out west, title favorite Los Angeles Clippers were shockingly eliminated in a Game 7 by the Denver Nuggets — a series few thought would go beyond six games — and you’re lying if you thought otherwise.

I’ll give you my breakdown of the exciting, shocking and disappointing takeaways from the second round of the NBA Playoffs.

Jimmy Buckets and the Miami Heat

If I told my 13-year-old self the team I’m rooting for to make the Finals and win it all, he’d probably come up with a number of ways to destroy my future so my current self would cease to exist. That’s right: I’m all in on the Miami Heat. Weird thing to say as a die-hard Chicago Bulls fan but hey, it’s 2020.

The former Bulls forward Jimmy Butler shocked the world as his team dispatched league-leading Milwaukee Bucks in five games after going up 3-0.

The five-time All-Star has consistently faced questions regarding his leadership and status as a star in the league. This season has eased those concerns, and this series erased the conversation. The 31-year-old averaged 23.4 points, 5.8 rebounds, 4.4 assists and 1.8 steals over the series, but what the statline doesn’t show is his overall impact on the court.

The Heat are led by the NBA’s “Godfather” Pat Riley and two-time NBA Champion Head Coach Erik Spoelstra, who have constructed a team with one goal: Win at all costs. That’s the mantra Butler has been searching for during his tumultuous career since Chicago, and the Heat have welcomed Butler’s gritty mentality with open arms.

Backed by rising star Bam Adebayo, former Finals MVP Andre Iguodala, former All-Star Goran Dragić and a host of savvy veterans and mature young players, the sky is truly the limit for this team, as they’ve clearly shot through the ceiling everyone gave them.

The Boston Celtics better watch out, and hope they can find a way to dig themselves out of the 2-0 hole in the ECF.

There are few things like that are guaranteed: The sun rising in the East and setting in the West, taxes, a freezing and ungodly windy DeKalb winter and “Playoff Rondo.”

The Los Angeles Lakers have struggled to find a consistent third player behind star forwards LeBron James and Anthony Davis, as the team has shown how top-heavy it is in the depth chart. Forward Kyle Kuzma and shooting guard Danny Green have been tabbed as that potential “third guy,” but they’ve been very inconsistent. Enter Rajon Rondo.

The Lakers guard made his NBA bubble debut in Game 1 against the Houston Rockets after returning from a hand injury that had sidelined him since July 12, prior to the NBA restart, according to a July 12 article from Bleacher Report. While Rondo is far from his prime, his return to the Lakers bolsters the team’s backcourt depth, its greatest weakness.

“Playoff Rondo” is a common joke in reference to Rondo’s play in the Playoffs — but at the same time, it’s not. Rondo seems to elevate his play exponentially every season in the Playoffs.

He did it in Boston for eight seasons while chasing titles with the NBA’s original “Big Three” of Paul Pierce, Kevin Garnett and Ray Allen. He did it in Chicago before injuring his hand against his former team; the Celtics. He did it in New Orleans for the Pelicans with current Lakers teammate Davis, and he’s doing it now for the Lakers.

It’s fun watching him, and for some many fans it’s great to see the former All-Star continuing to play important minutes in his third different NBA decade as the league continues to get younger.

Over five games Rondo averaged 10.6 points, 4.6 rebounds, 7 assists and two steals off the bench, including a 21-point, nine-assist performance in Game 3 and a near triple-double in Game 4. That’s up from 7.1 points, 3 rebounds, 5 assists, 0.8 steals during the regular season.

He may become an x-factor for the Lakers as they will face more complete teams with better backcourts in the next two rounds.

The Denver Nuggets made history Tuesday after they did away with the second-seeded Clippers in a Game 7 that should’ve never happened. The team won its sixth consecutive Game 7, tying an NBA record. They also completed another 3-1 series comeback, doing so in the previous round against the Utah Jazz, according to an article from the Denver Post. They are the first team to ever do it in consecutive rounds.

Point guard Jamal Murray was electric in Game 7, dropping 40 points, after averaging 22.6 points per game over the series. Center Nikola Jokić dropped a 16-22-13 triple double during the 1040-89 blowout win.

This series was supposed to lead to the long-awaited L.A. vs L.A. Western Conference Finals. Now the Nuggets will face the Lakers in the WCF. It’s not the ideal matchup, but with Nuggets stars Jokić and Murray’s elevated play, the series may be a very competitive one

I don’t think the Nuggets will win the WCF, especially after playing 14 grueling games compared to the Lakers’ easier 10 so far in these playoffs, but they’ve shown that you can’t quite count them out as they attempt a run at the franchise’s first Finals appearance.

Clippers Head Coach Doc Rivers has now blown his third 3-1 series lead as a head coach, doing so in 2015 against the Rockets with the Clippers, and 2003 against the Detroit Pistons with the Orlando Magic.

The team had lofty expectations after adding star forwards Kawhi Leonard, the 2019 Finals MVP, and Paul George in the offseason to an already pretty decent Clippers team. Leonard and George combined for 24 points in the decisive Game 7.

Both players were less than spectacular throughout the final three games of the series. They clearly failed to show up in Game 7, making it brutal back-to-back series performances for George after struggling against the Dallas Mavericks.

Guard Patrick Beverley struggled as well during the series, contributing little to the box score — unless you’re counting the Nuggets’ bonus totals. This led to Portland Trail Blazers guards Damian Lillard and C.J. McCollum taking to Twitter to clown their rivals yet again, including a vacation invite from Lillard since the Clippers will be heading home early.

Call me insane; call me an idiot for ignoring history: I fully expect the Clippers to be title favorites again next season, barring any major changes within the organization and roster.

Giannis and the Bucks

They had the NBA’s best record. They had the reigning and soon-to-be two-time MVP. They were the first team to head home in the second round.

Starting with Giannis Antetokounmpo, who averaged well below his normal numbers, was exposed. Yes, he did injure his ankle in Game 4, which ironically was the only game the Bucks won against the Heat. However, the series was over long before that.

It became clear that the Heat keyed in immediately on how to stop Giannis, who’s offensive game relies heavily on finding ways to the rim. Once the Heat were able to build a lead, it became difficult for Giannis to complete a comeback. He plays better downhill.

They came close in Game 2, but a controversial literal last-second foul call on Giannis after making slight contact with Butler as he shot from the corner, sent him to the line to break the 114-114 tie with 0.0 remaining on the clock.

Bucks forward Khris Middleton finally showed up to the bubble, averaging 25.6 points per game on 41.7% shooting, but the play from the rest of his team wasn’t there for it to matter.

There are fears that Giannis will look to leave Milwaukee in the summer of 2021 once his contract is up, as long as the Bucks fail to make roster changes and reach the Finals next season. With Milwaukee being a small market, that loss would be devastating for years to come.

Bonus: I told you so

I told you so. I’m not happy about it being right, but I’m right regardless. In my last “Huff’s Hoops” column I mentioned how the Rockets’ lack of size would be a challenge in a potential seven-game series vs the Lakers. L.A. essentially hopped over Houston to make it to the WCF.

I had no clue what the Rockets were thinking when they traded center Clint Capela to the Atlanta Hawks prior to the trade deadline. I was even more astounded when 6’5 forward P.J. Tucker was named starting center. Sorry Yoda, but “size matters not” doesn’t apply in basketball.

Small ball has been a recent trend in lineups in the NBA, but the Rockets took it to the extreme. The Lakers were able to adjust their rotation by forcing centers Dwight Howard and JaVale McGee to sit for most of the series, leaving the Rockets scrambling for answers to check James and Davis.

Even against the 6’9 James, the Rockets’ larger defenders seemed tiny and mismatched as the King made his way to the rim. Watching Davis in the post getting checked by defenders was pure comedy.

I predicted this outcome the day the trade was made. The Rockets were going to struggle against anyone who had star power forwards and centers, as those teams weren’t cutting major impact players out of the rotation to play down to the small ball strategy.

Now with Head Coach Mike D’Antoni announcing Sunday that he would be leaving the Rockets, according to an article from CBS Sports, it’s unclear what the future of the franchise with James Harden and Russell Westbrook will look like.

I’m very conservative when it comes to basketball, and I hope this series has killed, or at least leads to the demise of this style of basketball. Bring back traditional NBA centers.