Down the Lines: NFL Week 3 predictions 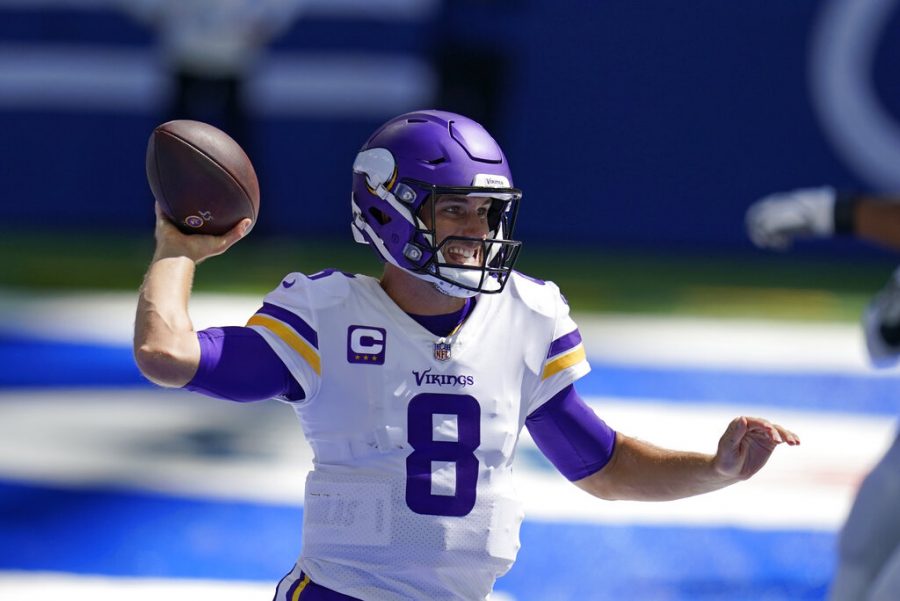 Minnesota Vikings quarterback Kirk Cousins (8) throws during the first half of an NFL football game against the Indianapolis Colts, Sunday, Sept. 20, 2020, in Indianapolis.

After two weeks of football action, some things have become very clear. One, the Cowboys still have no defense, but what do you need a defense for when your offense is second  in the league in total yards and sits as the sixth-highest scoring offense in the league?

Two, injuries are going to play a huge part in setting moneylines from here on out. Week 2 of the NFL season saw the likes of New York Giants running back Saquon Barkley, torn ACL done for the season, Christian McCaffrey of Carolina, ankle expected to miss multiple weeks, and others expecting to miss time. It will be interesting how oddsmakers adjust to these key departures.

Lastly, the college picture is still unclear as to which teams are going to insert themselves into the New Year’s Six conversation.

Reflecting on last week, the outcomes went the way I expected them to, for most. I was a solid 6-2 overall last week and 3-1 Against-the-Spread in the NFL last week.

I’ve learned a valuable lesson; no matter how much I love Bengals quarterback Joe Burrow, the Bengals defense is dumpster fire. I’ve seen some high school teams tackle better than that D-line. It’s safe to suggest that you stay away from Cincinnati in outright picking situations.

My other loss came at the hands of a Big 12 college football game. The supposed “high flying” Oklahoma State Cowboys offense sputtered Saturday vs a middle of the pack American Athletic team in Tulsa. The Pokes were only able to muster 16 points in a highly favored match-up. Heisman hopeful running back Chubba Hubbard had 27 carries and tallied 97 yards.

It also didn’t help matter that OSU lost quarterback Spencer Sanders in the 1st quarter due to an ankle injury, forcing Head Coach Mike Gundy to platoon quarterbacks for the rest of the game. Once again the Big-12 has proven it is a one horse conference with Oklahoma at the top and everyone else fighting for scraps.

This week’s instalment gets a little more interesting with five NFL games on the slate, but a break from NCAA action this week, due to weaker games. The Saturday slate will return to the column in the near future as conferences move into more contested match-ups. As always, strap in for an exciting weekend and remember to gamble responsibly.

“Da Bears” are 2-0 for the first time since 2013, according to Yahoo Sports. This quick start has not come easy, as the Bears pulled out a 17-13 victory over the New York Giants who were without star running back Saquon Barkley for most of the game due to a torn ACL. While Barkley’s injury dominated the storyline of the game, Bears fans should be more concerned with streaky quarterback play. Bears quarterback Mitch Trubisky did not have a great game completing, 18-28 passes for 190 yards, 2 touchdowns and 2 interceptions. How the Giants were able to stay competitive against a defense that ranks third in lowest points per game should be commended.

This week the Bears defense is going to be put to the test as they face a Falcons offense that ranks inside the top-10 in points per game at 32, and runs a pass-heavy offense. Expect to see Falcons quarterback Matt Ryan target receivers Julio Jones and Calvin Ridley a lot this Sunday against a Chicago secondary that is giving up 254 yards per game through the air. If the Bears want to move to 3-0 they’re going to need both sides of the ball to fire on all cylinders. I’m taking the Falcons outright.

The Minnesota Vikings are off to a rough start in the 2020 campaign. The Vikings are in the bottom-five for both offensive and defensive statistical categories, and I’m not sure what to attribute this flat start on. Could it be due to the loss of star wide receiver Steffon Diggs, or could it be due to Vikings star quarterback Kirk Cousins ranking last in overall position rating? Cousins has not lived up to the mega-millions deal he inked back in 2018. I will be upfront, I’ve never been high on Cousins, but I never expected to only have 372 passing yards and 2 touchdowns through the first 2 weeks of the season. That’s also failing to mention the signal caller has thrown four interceptions in the same time frame.

The Titans on the other hand look to be at the top of the AFC South again this year, and quarterback Ryan Tannehill looks more than serviceable in what was going to be a “run first” offense thanks to lead back Derrick Henry. Tannehill has made this offense a dual threat and doing it in a convincing fashion. Through two weeks, Tannehill has thrown six touchdowns and zero interceptions, currently sitting at an 83.6 QBR, making him the sixth most effective QB in the league thus far. This is a tough draw for Vikings Head Coach Mike Zimmer as, most likely, after Sunday he will be in the hot seat. I’m taking the Titans outright and the over on the 48.5 point line.

If you have never watched a Big 12 Conference college football game, you may want to tune into this game because that is what this Cowboys-Seahawks match-up is shaping up to be. Both Russell Wilson for Seattle and Dak Prescott for Dallas are in the top-10 in QBR and completion percentage. Wilson is arguably an MVP candidate and Prescott continues to prove why Cowboys owner Jerry Jones should pay him that insane contract.

Both offenses have an insane amount of talent surrounding each quarterback. For the Seahawks that talent consists of running back Chris Carson and wide receivers D.K. Metcalf and Tyler Lockett. The Cowboys have a star in running back Ezekiel Elliott and a receiving corp of Amari Cooper, Ceedee Lamb and Michael Gallup. There will be no shortage of offensive fireworks in this match-up. This game is really a toss-up. Both teams could win this on the backs of it’s offense. So when in doubt, just take the over. At 44 combined points these 2 teams should match that in no time.

Could this be the second, maybe third, coming of MVP Aaron Rodgers? Through two weeks the Packers quarterback has looked nothing shy of MVP voting worthy. Rodgers has thrown for 604 yards, six Touchdowns and no interceptions. All of those stats have put him in the top-five of all QB statistical categories and a league-best 91.0 QBR. The Packers’ offense though is more than Rodgers slinging touchdowns through the air. Currently Packers running back Aaron Jones leads the league in rushing with 234 yards. Jones also has three rushing TDs, along with one reception for a touchdown, and is averaging 6.9 yards-per-carry making him the second best back in the league. The Saints though are by and far the hardest test yet for Green Bay and even though the offense is elite, the defense is not something to hang your hat on.

On paper, the Saints should hand the Packers their first loss of the season, but this game isn’t being played on paper. New Orleans is going to be without star wide receiver Michael Thomas for a second straight week, due to late Week 1 ankle injury, so more weight is going to fall to running back Alvin Kamara and receivers Jared Cook and Emmanuel Sanders. The issue for the Saints this season has not been weapons though; it’s been the gun itself. Veteran quarterback, and future first ballot hall of famer, Drew Brees is  finally showing his age. Currently through two weeks of the season, Brees has only thrown for 472 yards, completed 64% of his passes and contributed three scores through the air. Brees just looked flat Monday night against the Raiders and without his number one target, I don’t know how confident I am in the 41-year-old’s ability Sunday night. This is a go with my gut pick, Drew Brees just isn’t the same without Thomas, so I’m taking the Packers outright to win this game over the Saints in New Orleans.

What could be a preview of this season’s AFC Championship game, there’s no doubt this will be a high scoring game. Chiefs quarterback Patrick Mahomes is quietly racking up top-10 numbers behind center again. Currently, Mahomes has 513 yards, five TDs and the third highest QBR in the league. Mahomes has his usual weapons in tight end Travis Kelce and receiver Tyreek Hill, but the biggest surprise this season has been the Chiefs’ defense that is top-10 in points allowed per game.

The Ravens on the other hand have leaned hard on its defense which ranks in the top-10 in all team defensive categories, which has been good for quarterback Lamar Jackson who is off to a slower start statistically, only recording 479 yards in the air, four scores and less than 100 yards rushing. The Ravens will need a big performance through the air from Jackson if they want to knock off the defending Super Bowl champs. I haven’t seen anything yet to support me not riding the Chiefs in this one, so I will take Kansas City outright over the Ravens in Baltimore.