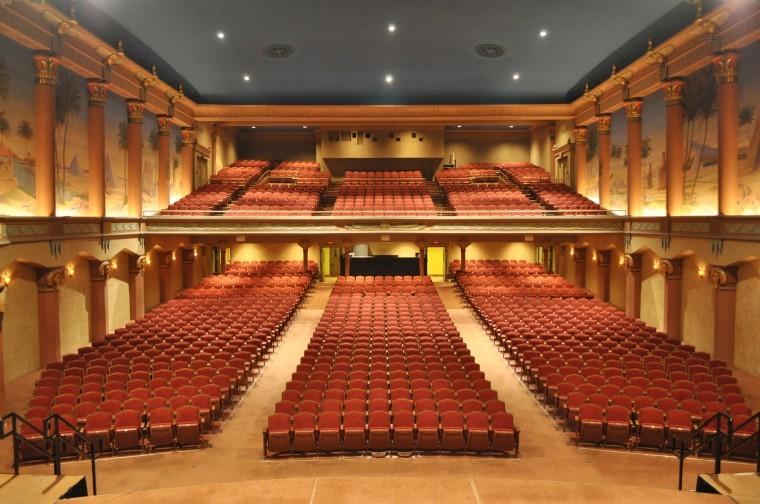 Every Thursday night at 6 p.m. for the past seven weeks, the Egyptian Theatre, 135 N 2nd St., has been hosting a livestream concert on their Facebook page, called #815 Live. #815 Live is the chance for local artists and groups to perform virtually due to Covid-19, as explained by the host Jeanine Holcomb, a theatre employee.

Mark Walters, a rock artist from DeKalb, IL, was the featured local singer/songwriter for this week’s live stream concert. On his SoundCloud under the name Kram Sretlaw he has been creating rock and roll songs of his own for the last five years.

He did a set that was a mix of cover songs and his own original songs from his upcoming album, “Paralysis by Analysis.” Walters is a very talented musician and by listening to his voice when he sings, I could tell how passionate he is about his music. During each song one could hear that he sang with all his might, whether it was one of his own songs or one of the cover songs.

In between every other song, he would take the sheet music and throw it out of the way. Having fun with one’s stage presence is important, although it was a virtual concert, because it brought the audience and the performer together through a screen.

Overall, Walter had a welcoming stage presence and he wasn’t hesitant to make the stage, looking out on empty rows, his own.

One of the cover songs that was performed was ‘Sergeant Peppers’ by The Beatles. Walters’ version of the song is probably my favorite that I’ve heard so far. The emotions on his face while he was singing were authentic, not staged, like he was giving each note or lyric everything he had to offer.

Throughout his entire concert I never took my eyes off the computer screen nor did I ever lose an interest in the performance.

Walters did sing some of his own original music from his upcoming album. Walters shared that the album is going to be available on Spotify, Apple Music and vinyl. He explained that he is just waiting for the vinyl to be ready so everything can be available on other platforms.

A couple of the songs he featured from the album were “Enigma” and “How Are You.” Although I had never heard of Walters before, the preview he gave of his album made me anticipate the rest of the album.

Hearing the lyric “Starving for some love” from his song “How Are You” I felt like it was relatable for any age, because no matter how old someone may be they still want someone to love them. One could tell just by listening that he puts so much heart and soul into each lyric when he writes his songs, in a way that not only provides emotional release for himself, but for listeners too.

Walters performance can be viewed on the Egyptian Theatre Facebook page. Also, there are six other past #815 concerts that have been recorded through livestream that you can go check out as well.