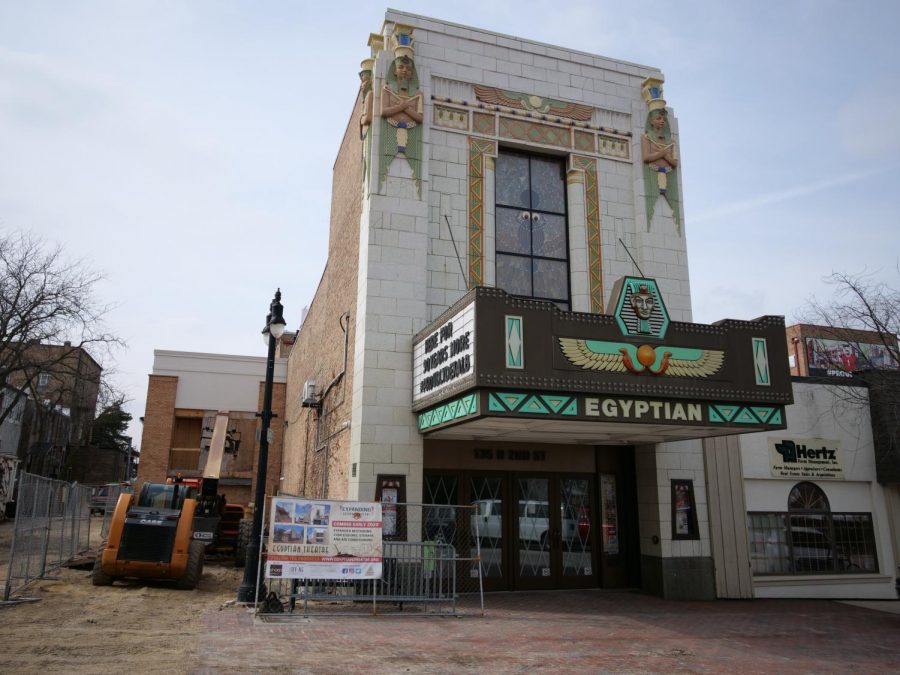 DeKALB – After months of being closed due to the COVID-19 pandemic and ongoing renovations, The Egyptian Theatre will open to the public for in-person events throughout the month of October. Given the holiday of Halloween on Oct. 31, all of the events are dedicated to horror films and the spooky history of DeKalb’s landmark theater.

Every Friday in October, The Egyptian Theatre, 135 N Second St. will host the BOO’ze and Spirits Tour, in which staff will lead a flashlight tour of the theater. The tour will display the theater’s history as well as creepy sightings and some of the ghosts rumoured to inhabit the space, according to the Egyptian Theatre’s website.

The other important addition are the ghost stories that will be told on the tour. They have been provided by the construction workers who have been working on the Egyptian Theatre’s addition since May of 2019, Holcomb said.

Masks and flashlights are required for the tours, and tickets cost $25 for adults and $20 for students with an ID and seniors, according to the Egyptian Theatre’s website. Minors must be accompanied by an adult and only those of legal age can purchase alcohol.

In celebration of Halloween, the Egyptian Theatre will screen four horror films, “The Texas Chainsaw Massacre,” “Night of the Living Dead,” “The Amityville Horror” and “A Nightmare on Elm Street,” at 6 p.m. on October 17, 18, 24 and 25 respectively, according to the Egyptian Theatre’s website. Also being shown is the family-friendly film “Hocus Pocus” at 6 p.m. on October 21 with tickets costing five dollars for adults and two dollars for children.

“We love really classic horror films,” Holcomb said. “People may have seen them at home but to see them at the Egyptian brings a new level of scares to them.”

Tickets for the films cost $10 for adults and $8 for students with an ID and seniors. Tickets can be purchased on The Egyptian Theatre’s website or at the Box Office before the show begins, according to the Egyptian Theatre website. However, seats are limited in accordance with COVID-19 safety guidelines.

Staff and volunteers will be sanitizing seats before and after shows and will clean bathrooms and concession stands multiple times, Holcomb said. Masks are required although patrons may remove masks, once in the socially distanced seats, to enjoy concessions.

“The Rocky Horror Picture Show,” commonly presented at The Egyptian Theatre multiple times per year, will also be performed in a socially distanced screening at 11:59 p.m. on October 30. The film will start in the early hours of Halloween. The screening will feature the Irrational Masters, a local shadowcast who will act out the entire film on the Egyptian Theatre’s stage in front of the screen as the film is playing, according to the Egyptian Theatre’s website.

“We were really lucky to get ‘The Rocky Horror Picture Show,’” Holcomb said. “We sat down with the Irrational Masters, got a show date and they’re a great cast.”

While “The Rocky Horror Picture Show” screenings rely on audience interaction, the upcoming screening will be socially distanced with prop kits full of items for the audience to interact with during the film, and will be altered to prevent the spread of COVID-19, Holcomb said.

“We’re very excited to get back on the stage, we haven’t had Rocky for eight months and I’m sure a lot of fans are itching as much as we are to see those lips again,” Josh Chesser, director of the Irrational Masters, said. “ “‘Rocky Horror’ is a staple of October. The fact that we’ll be doing The Time Warp on Halloween for an audience after so long without this form of entertainment is just magical.”

Tickets for the show cost $20 and can be bought on the Egyptian Theatre’s website or at the Box Office before the show.

After over a year of construction, the renovations of the Egyptian Theatre have all but concluded, Holcomb said.

Originally started with a groundbreaking ceremony on May 1, 2019, the Egyptian Theatre renovations have resulted in the expansions of the men’s and women’s restrooms, a liquor license, expanded concession stands on both floors of the theater, a wheelchair accessible entrance, new carpeting and, for the first time in 90 years, air-conditioning, according to a May 2019 Northern Star Article.

Within the past month, the carpet has been completely installed and all that’s left to manage are small, last-minute items, Holcomb said. However, one aspect of the construction that is going to be postponed is a large celebration of its completion.

“We talked about a social distanced celebration but we wanted to wait,” Holcomb said. “We didn’t want to exclude anyone from joining.”

Before the pandemic struck the U.S., the Egyptian Theatre staff was able to announce events months in advance but, due to an uncertain future, events will have to be announced by month to adapt to changing guidelines, Holcomb said.

Currently, live events, such as musical groups, aren’t possible because of social distancing, but more film series are expected to come to the theater including comedies, films of the 1980s and holiday films during December.