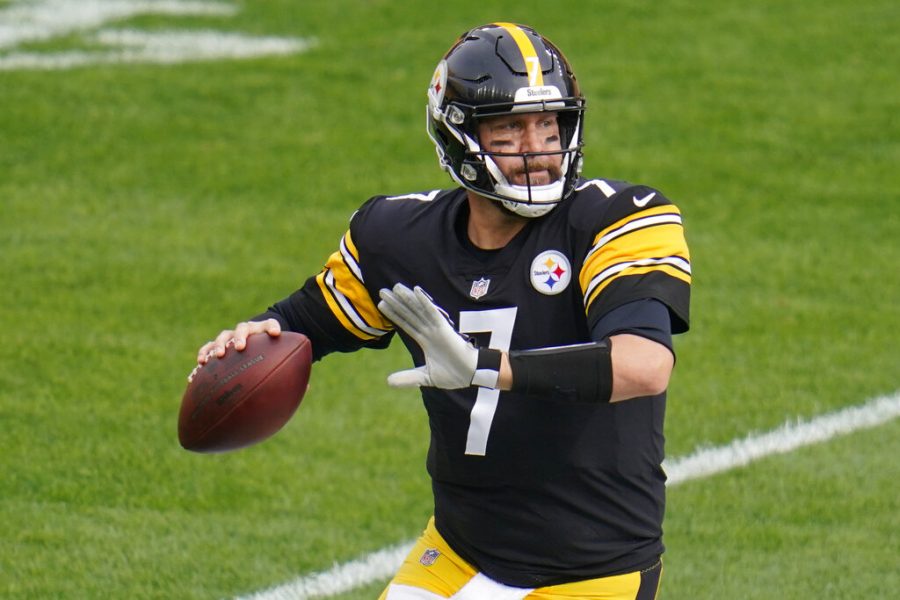 Pittsburgh Steelers quarterback Ben Roethlisberger (7) looks to pass against the Cleveland Browns in the first half of an NFL football game Sunday, Oct. 18, 2020, in Pittsburgh.

The Rams are arguably the best two-loss team in the NFL. Behind defensive tackle Aaron Donald, the Rams defense grades out as the seventh best in the league according to ProFootballFocus Metrics. Donald’s and the Rams’ front seven ability to pressure the quarterback while it’s secondary lead by cornerback Jalen Ramsey locks down opposing receivers have made them formidable this season. The Rams defense will need another solid performance this week.

The Dolphins however have officially relieved veteran quarterback Ryan Fitzpatrick of his starting duties. The starting job is now in the hands of rookie Tua Tagovailoa, who had an impressive college career at Alabama. The Fins are coming off their bye week giving Tagovailoa time to get reps in with the first team, but will it be enough? The bar is low, given the PFF has Miami graded in the bottom-10 in offensive efficiency.

I’m really excited to watch Tua take the reins of an NFL offense. One, because I have him as a quarterback in my Dynasty fantasy league, but also because the 2020 NFL draft has already produced two exciting rookie passers who have made impacts for their teams in Justin Herbert and Joe Burrow. All that being said, I’m selecting the Rams outright and the over on the points.

A rematch of week one, in which Packers quarterback Aaron Rodgers threw for over 360 yards and four scores on the way to a 10-point victory. Rodgers has been consistent so far this season, only suffering one black eye against the Tampa Bay Buccaneers that has come on strong in recent weeks. The Pack gained back Pro Bowl receiver Davante Adams, but have been without Pro Bowl running back Aaron Jones this week, as he’s nursing a calf injury. If Jones cannot play Sunday, expect to see more Jamaal Williams and rookie A.J. Dillon.

The Vikings still sit at the bottom of the division, but at least on film, look to be finding some rhythm on offense. Quarterback Kirk Cousins has struggled so far this season, throwing 11 scores to 10 interceptions. Despite the turnovers, the offense ranks sixth according to PFF grade, thanks in part to the effectiveness of running back Dalvin Cook and rookie wide receiver Justin Jefferson, who have combined for almost 1000 yards and ten scores. The Vikings defense though has graded in the bottom-four in all metrics, which does not bode well against a toxic Packers offense.

I think Green Bay wins this game, but I’m going to pick the Vikings against the spread and the over on points.

What has the potential to be an AFC championship match-up, the undefeated Steelers will roll into Baltimore leaning on its best-in-the-league defense. The Steelers defense ranks in the top-10 in all PFF Metrics. While the defense has kept them in close games, in order to stay undefeated, Pittsburg offense will need to ball out. Quarterback Ben Roethlisberger has thrown for almost 1500 yards, 13 scores and only 4 picks. Those numbers have given the veteran signal caller a QBR just under 100.

The Raven’s have one loss on the season and seem to be trending towards another long playoff run, but there are questionable signs on the offensive side of the football which should be looked at if you are considering picking the favorites this week. Quarterback Lamar Jackson has always been a dual-threat quarterback, but this year, the Raven’s seem to be relying on his legs more than those of his running backs Mark Ingram, Gus Edwards and J.K. Dobbins. Jackson has tucked the ball 50 times for almost 350 yards, while lead back Ingram has only 225 yards in as many attempts, according to ESPN. The Ravens passing game is also very stagnant in the red zone, with only tight end Mark Andrews having multiple scores. The Ravens will need to find a way to find the endzone against a very tough red zone defense.

I’m hard pressed to pick the Steelers this week as they seem to be clicking at the right time. I’m going to take Pittsburg to remain undefeated and I like this under on points with the Steelers stout defense.

A Saints offense run by aging quarterback Drew Brees travels to the windy city this weekend to face the sixth-best defense according to PFF. That first statement should set off alarm bells, but to make things possibly worse for the Saints, they could be without star wide receiver Michael Thomas, who hasn’t played since week one due to a hamstring injury sustained in practice this week. Expect running back Alvin Kamara to have another big game out of the backfield not just in touch volume but pass targets as well.

The Bears came into this week beat up as well, with both wide receivers Allen Robinson and Cordarrelle Patterson listed as questionable on the Thursday injury report. The stout defense is also in jeopardy of missing two key faces. Linebacker Khalil Mack and safety Eddie Jackson are listed as questionable for Sunday. Jackson did not participate during Wednesday’s practice.

While the Saints quarterback has had a down year compared to previous seasons, that is no match for the effectiveness of Chicago’s two quarterbacks. Nick Foles, who took over the offense a month ago has thrown six interceptions in five games to only six scores. It’s hard to think of Foles as an upgrade.

I’m not sure who to pick, or to really pick early due to injuries on both sides, so I will phrase my selection this way. If Thomas can suit up this week for the Saints and either Mack or Jackson cannot go for the Bears, I’m taking the Saints. If the Saints are without Thomas however, and Chicago has a full defense, I’m taking the Bears against the spread and the under on the points.

An empty Happy Valley will be a huge adjustment to the typical white out game that the Lions put on when Ohio State comes to town, but there should be plenty of fireworks on the field to make for a great showing.

The Buckeyes are the third-ranked team in the nation after putting on a second half clinic in week one against Nebraska. Heisman trophy hopeful Justin Fields looked just as impressive as he ended last season, completing 20-21 passes for 276 yards and 2 scores. Fields also carried the ball 15 times for 54 yards and a rushing score. The Buckeyes defense was also no slouch in its opening week, holding the Huskers to under 400 total yards. Expect the Buckeyes to continue to build this weekend as they make a rush for the College Football Playoff.

Penn State had the second most surprising loss of the Big Ten’s opening week, only because Rutgers actually won a football game. The Nittany Lions suffered a one-point loss to Indiana after the defense failed to hold the hoosiers on a 2-point conversion. Quarterback Sean Clifford has struggled, throwing two interceptions that led to touchdowns. Penn State will need to clean up offensive mistakes if they want to remain competitive Saturday night.

The Buckeyes have a 79% chance of winning in Happy Valley according to ESPN FPI. And I like the Buckeyes chances, but from a value standpoint I’m going to take Penn State at 12.5 against the spread and the over. OSU wins but Penn State covers.

The Bearcats are ranked seventh in the latest AP Poll, making some wonder if they could sneak into the Playoff if they run the table convincingly. So far this season, they have done just that, outsourcing opponents on average 37.3-12.5 according to ESPN. Cincy’s offense has been top of the American Athletic conference thanks to quarterback Desmond Ridder and running back Gerrid Doaks, who have combined for 17 touchdowns.

Memphis has a quarterback as well who is putting up Heisman numbers. Brady White has thrown for almost 1400 yards, 17 touchdowns to only four interceptions. White will need to have another big game this week if they want to spoil the Bearcats’ chances at making a New Year’s Six bowl.

The Tigers are heavy underdogs. Memphis currently has a 38% chance of knocking off Luke Fickells Bearcats according to ESPN FPI. Don’t count the Tigers out though. I’m expecting a big game from White. I’m taking Memphis by a touchdown.