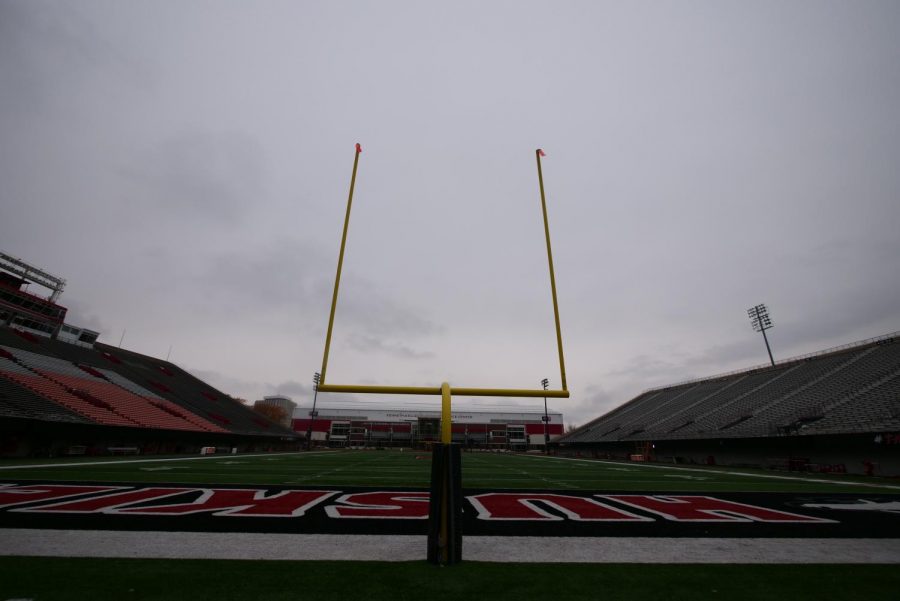 DeKALB — After an offseason clouded by COVID-19 made football in the fall seem impossible, NIU football will host the University at Buffalo Bulls at 6 p.m. Wednesday to start their season.

The season was in doubt after the Mid-American Conference and its respective university presidents postponed all fall sports in August. On Sept. 25, the league announced its intention to have a six-game football schedule, with training camps running through October.

Head Coach Thomas Hammock said the ability to finally play a game will be a weight lifted off the teams shoulders.

“This has been a long time coming,” Hammock said. “We’ve seen first hand the ups and downs of guys wanting to be able to play football. Our guys are anxious and I think they’re ready to go.”

COVID-19 means changes to normal game day festivities. No fans or tailgating will be allowed at Huskie Stadium with only family of program members and cardboard cutouts purchased by fans filling the stands.

The Huskies are seeing changes as well, with 57 new players in the program this year, including 47 first-year players playing their first game Wednesday. Hammock said getting new players acclimated may be a challenge, but they will remain a factor through hard work.

“We all look at things from a different perspective,” Hammock said. “If we walked our guys on the field and stood them there, you wouldn’t be able to tell who was a freshman and which guys not. I think from a size and physicality stand point, these young guys have completed and done everything we’ve asked of them.”

NIU will be starting five true first-year players, four of which are on defense. Additionally, sophomore cornerback Jordan Gandy will start in his first game with NIU after transferring from South Dakota State.

Gandy and the new offense have the added pressure of Buffalo declining to name a starting quarterback between junior Kyle Vantrease or sophomore Matt Myers before Wednesday’s game. Whoever gets the nod will start in the backfield with junior running back Jaret Patterson who rushed for 1,799 yards and 19 touchdowns last season.

The new talent on the roster means pressure has been ramped up by the coaching staff for upperclassman to lead, with Hammock saying he expects them to be a key in the team’s success this year.

“I really want to see the leadership of our upperclassman stick out,” Hammock said. “I want them to lead these guys in the right direction to do everything possible to get a victory.”

“One thing that Coach Hammock has challenged me to do, and I think I’m finally understanding, is to not wait until things get bad,” Pugh said. “I have to be a leader and be vocal from the get-go and just encourage guys to stay confident and have a next play mentality. We’re trying to be proactive and not reactive.”

The Huskies are at least 10-point underdogs to the Bulls according to several major sportsbooks, but a shortened schedule and no non-conference play means the opening game will be NIU’s first chance to see their strengths and weaknesses.

Hammock said his focus in their opening game will be on the line of scrimmage for both sides of the ball, believing the battle in the trenches will set the tone for the team in weeks to come.

“We want to establish a mentality and approach to how we want to play,” Hammock said. “I think that starts up front on the offensive and defensive lines. We have to be physical at the point of attack and that physicality is going to carry us throughout the season.”

NIU struggled scoring last year in the new offense Hammock and offensive coordinator Eric Eidsness put in place, ranking 10th in the conference in points per game. Redshirt junior wide receiver Cole Tucker said the team used the offseason to correct issues they had with the new offense.

“The biggest thing we’ve been focused on are the little details,” Tucker said. “I think last year with it being our first in the system, some guys were a little confused. It’s not an easy offense to run. We were able to get together during the offseason and go over the minute details and really focusing on doing the little things correctly is a huge deal for us.”

Tucker and the offense will be working with a new running back after Tre Harbison transferred at the end of last season and redshirt sophmore Jordan Nettles opted out for this season.

Junior running back Erin Collins is listed as the Huskies starting tailback, with Hammock having a lot of praise for the transfer from Hutchinson Community College. Collins rushed for 11 touchdowns in 14 career games at Hutchinson.

“He’s a guy that gets stronger with more volume,” Hammock said. “He’s got good vision. He can find the hole. He has enough speed to take it the distance.”

The game will be the first meeting of the two programs since NIU’s 2018 Mid-American Conference title win over the Bulls that saw the Huskies complete a 19-point comeback in the second half. Pugh said he doesn’t think the memories of the championship game will be a big motivational factor.

The Huskies have never lost to the Bulls as a MAC rival and hold a 29-4 record against MAC East opponents since 2008. Kickoff is scheduled for 6 p.m. Wednesday at Huskie Stadium. Fans can watch the game live on ESPN2.