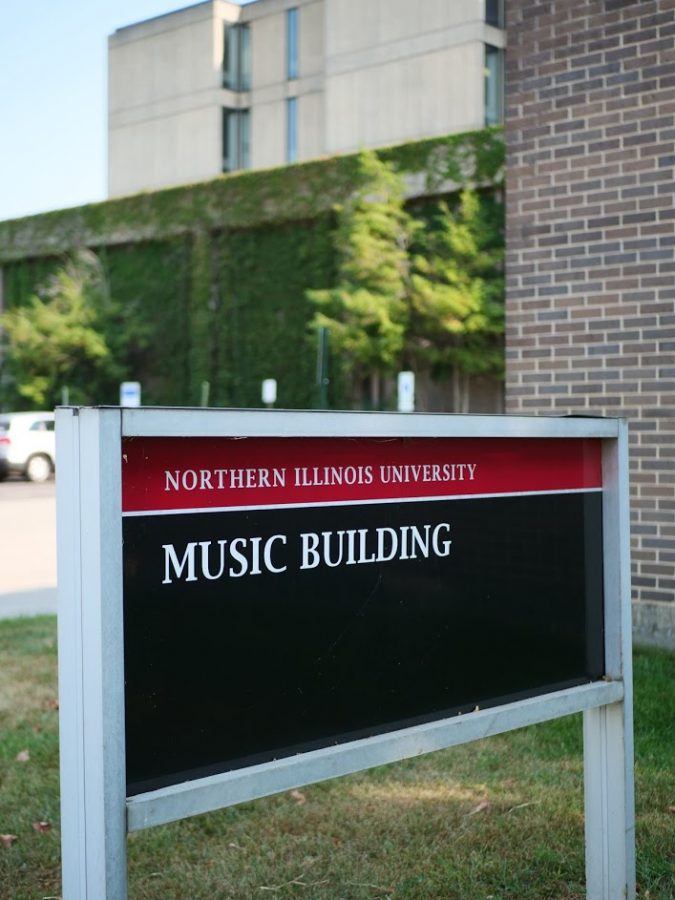 Music building sign stands in the grass along Lucinda Avenue in DeKalb.

For the musician Robert De Leon’s performance, I was amazed by how few instruments were on the stage for both halves of the concert and the musicians’ ability to make each performance sound like there were at least four or five instruments in use. Even though there were at least two musicians performing at one time. During the first half of the concert, they used a grand piano, a drum set, a tenor drum and a kettledrum set — big, copper drums that make a deep, thunderous sound.

One of my favorite parts of the first half was every time a musician would use the kettledrums because of the deep hollow sound they made. Even though the drums had a very deep sound to them, I thought the sound they made was soothing. At one point during the performance with the kettledrums, another musician started to play the symbolon the drum set, creating the sound of rain drops. This reminded me of the waterfall audio that some people might listen to because it’s relaxing.

The stage crew brought different instruments onto the stage for the second half of the concert. The instruments were snare drums and a marimba which looks like a huge xylophone with wooden plates on top and metal pipes hanging underneath. The first two performances of the second half were done by Robert De Leon, unlike the first half which had two performances with at least two musicians.

The first performance of the second half involved the snare drums. Two different snare drums were played. The smaller one was used first, and the musician used a pair of regular drumsticks with the drum. It sounded like the drums similar to the drumline in a marching band, worn on a harness so they could walk around with the drums.

Toward the end of the performance, with the bigger snare drum, the musician used a drumstick that looked like a paintbrush with metal bristles. However, when it was used it sounded almost like nails on a chalkboard, except with a much deeper sound.

The other instrument used in the second half was a marimba, which like a xylophone had two rows of keys one higher and one lower. It almost sounded like a wind chime but not as high pitched, and the pipes weren’t banging against each other, which created more noise. What I thought was really interesting is that the musician had a pair of drumsticks in each hand. I have never seen anyone play an instrument like this before, so I was amazed at the technical skill that goes into playing such an instrument.

While watching and listening to some of the closing performances of up-beat and jazzy music, I could imagine myself down in New Orleans during Mardi Gras. They were using a drum set, two trombones, a tuba, two saxophones and a trumpet.

The best part of the last performance was seeing one of the saxophone musicians really getting into the music. He held the saxophone at his side so he could dance with the music while they played.