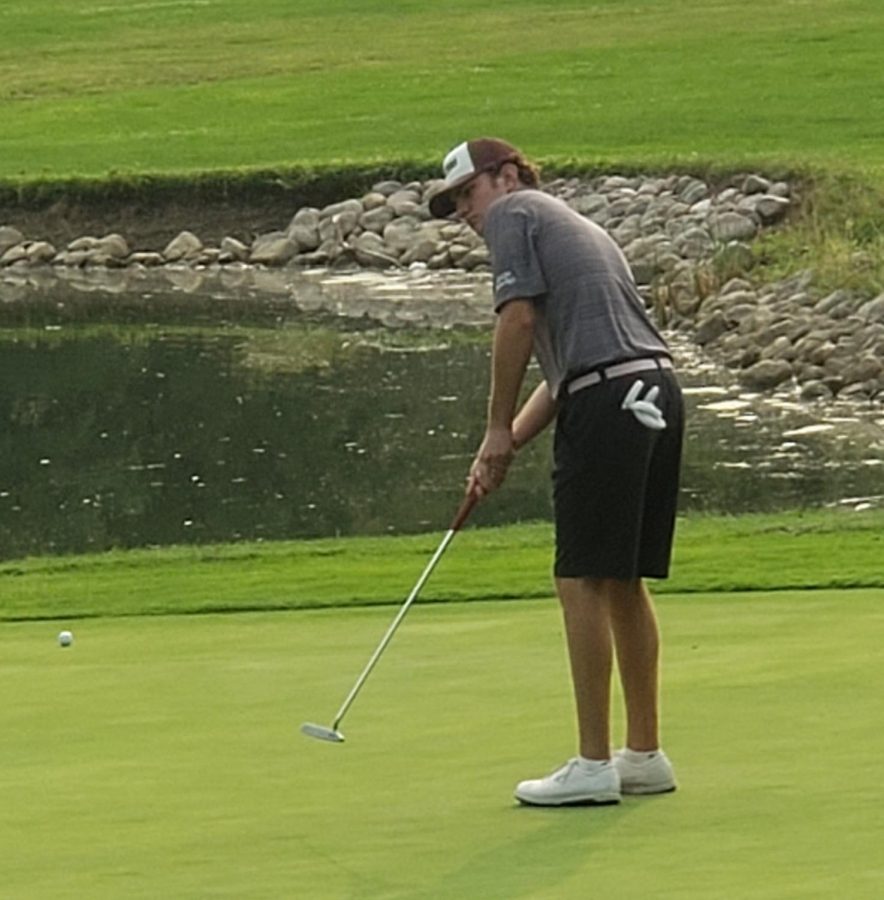 DeKALB — Calling oneself a college athlete is a dream come true. Having the opportunity to play on the biggest amatuer stages, creates for moments that will last a lifetime. While those journeys take years in the making to become reality, National Signing Day is the sort of celebration of all that work finally coming to fruition.

On Wednesday, those dreams came true for hundreds of athletes across the nation. Including one high school golfer who picked up the game due a mother’s want for more quality time with family.

Sluzas is the highest ranked player in the state of Illinois for the class of 2021 along with being ranked as the 12th best junior golfer in the U.S, according to Junior Golf Scoreboard.

The two-time IHSA individual state champion and 2020 Illinois State Junior Amatuer Champion, became a highly touted recruit by many division-one schools across the nation during his sophomore year, in which he claimed his first IHSA individual golf championship.

“A couple of schools interested were [University of Illinois], Iowa State, Rutgers and Notre Dame. [Those] were the ones I thought were interested,” Sluzas said.

Heading into his junior season, Sluzas had many options to choose from in terms of top college golf programs, but still had yet to receive an official offer.

“Lots of schools just said we needed to see you play more, but I hadn’t received an official offer yet,” Sluzas said.

That all changed in October 2019, when Sluzas claimed his second IHSA Individual golf title, making him just the tenth Illinois high school golfer to claim multiple individual titles since 1975, when the IHSA began using the classification system for golf based on school population. The first offer he received was from NIU.

“[Head Coach] Carlson made his offer in November [2019]… at that point I was just trying to see what all the schools would offer and then [COVID-19] hit,” Sluzas said.

The COVID-19 pandemic at the start of 2020 caused the NCAA to not only place a freeze on all recruiting efforts, but cancel in-person college classes and visits alike, raising major flags for future college students and athletes alike.

“[COVID-19] put a major change in how college recruiting worked… that’s just how it was,” Sluzas said.

Regardless of the pandemic, Sluzas said he still continued to receive interest from universities, but it seemed that NIU was eyeing the then junior a little bit harder than other schools.

Head Coach John Carlson, who had just joined the Huskies that season, was very impressed in what Sluzas brought to the table.

“Two things stood out to me. [Sluzas] is a very mature golfer,” Carlson said. “He’s one that deals with adversity, and handles the pressure really well. Those intangibles are hard to teach at the collegiate level.”

Though recruiting became difficult, Sluzas said a lot of his decision came down to not just the academics of NIU, to which he plans to pursue a focus in business, but NIU’s access to top facilities and the manner in which Carlson believed in him.

“ [Carlson] put a lot of belief in me which I never really felt before from any other coach,” SluzasThat really stuck out to me knowing that his mindset is to make me a better player and really wants to help me.”

Carlson, who previously was the head coach at the University of Minnesota, takes commitment to players and improving their games as a top priority.

“Collegiate golf throws a lot of obstacles at the players,”Carlson said. “I truly believe that each of these players just needs to hear it out loud that they’re not only a good player, but they can compete with anyone.”

While Sluzas is one of the top juniors in the U.S., his mentality heading into college is still one that most first-year students can understand.

“A personal goal of mine, for [my first] year, is going to be managing school well along with golf,” Sluzas said.“I think that is going to be a good challenge to have starting off.”.

Sluzas said he also hopes access to Rich Harvest Farms, NIU’s home facility, will give him the opportunity to hone in more on certain aspects of his game.

“I can hit it far off the tee and accurately,” Sluzas said. “I really want to work on proximity to the hole which will ultimately give me more opportunities to get birdies.”.

While Sluzas was unable to go for a three-peat state championship, Wednesday closed one chapter of this young man’s golf career, but has also begun another.

Instead of donning the maroon and white for the Porters, Sluzas will trade in for the Red and Black next fall becoming the newest member of Huskie golf.

Sluzas is the only signing of the 2021 NIU Men’s Golf recruiting class, but for Carlson he considers this to be a good start in his recruiting efforts at NIU.

“ [Sluzas] sets the bar high,” Carlson said. “To be able to be a level playing field with some of the top schools in the country. I knew that we needed to put ourselves out there and show people what Rich Harvest Farms has.”

Carlson, who previously was the Head coach and Director of Golf for the University of Minnesota, said NIU’s facilities are something to be highlighted.

“I believe [Rich Harvest Farms] is one of the top training grounds in the whole country,” Carlson said. “What we have from an indoor and outdoor perspective rivals what a lot of the power five conferences have.”

Carlson said he hopes this signing will help the program going forward as he and the rest of the staff now turn their attention to the Spring 21 season, but also the 2022 recruiting class.

“It is important for nationally to have some recognition on the recruiting front,” Carlson said. “This is going to be one of the smaller recruiting classes that we have going forward. We wanted to go after the absolute best player and Ben Sluzas was top of the board from the start.”

For now though, Carlson said he is hopeful Sluzas will bring a poise with him to help replace some members who will be graduating next spring.

“[Sluzas] is going to bring that maturity when we go play our first event in Fall 2021,” Carlson said. “He’s ready for the moment.”

Currently, Carlson said he expects the 2021 roster to consist of nine members. The Fall 2021 season is expected to begin in August with the Huskies competitive fall season.