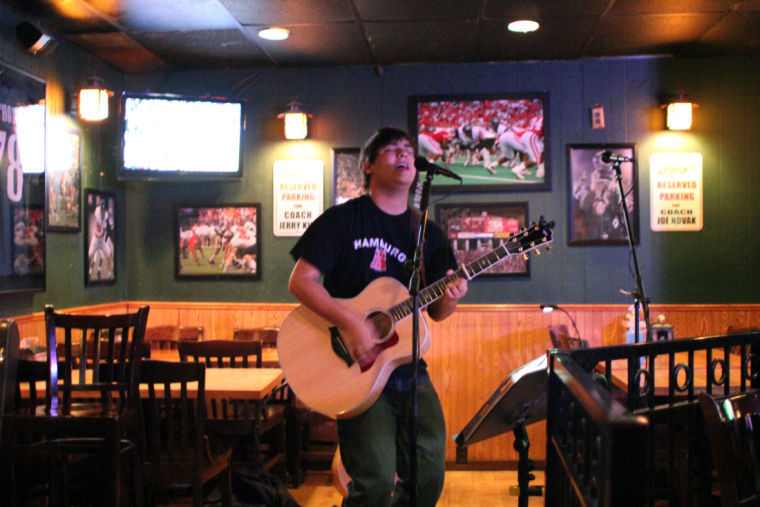 Due to the mitigation restrictions for region one that Governor J.B. Pritzker has extended until Nov. 14, local bars and restaurants have lost their live music aspect that brought regular customers. And in turn, local artists have suffered loss in income and exposure necessary to build a fanbase and recognition for their music.

Before the pandemic, Fatty’s, 1312 W. Lincoln Highway, would host live music two to three times a week in their back facility reserved for banquets during the week and bands on weekends. “But now that’s all gone,” owner Jeff Dobie said.

In addition to only being able to cater food at this time, no live music has affected business, considering people from surrounding suburbs and Chicago came to Fatty’s to see bands perform, Dobie said. While Fatty’s gained customers, bands gained fans.

The absence of this exchange between Fatty’s and musicians has not only left the restaurants grappling, but local artists as well.

Two members out of the six member local band, Back Country Roads, whom Fatty’s housed frequently, are full time performers, while the remaining four have full time jobs in addition to performing, lead singer Kyle Miller said. Playing gigs at festivals and inside restaurants was how they made most of their money, but now that income is gone.

“We’ve made ¼ of what we usually make [this year]. In the summer we [usually] play 15 shows alone in a month. We’ve played 18 shows all year. So, what was done in a month, was the entire year,” Miller said.

Musicians, and any other unemployed individuals at this time, can only receive unemployment aid if they can display income on their W2. Since small musicians perform gigs when they can, and without a record deal, they do not have a consistently fixed income, so they’re not eligible for aid.

Justine Ewald, solo singer and songwriter who plays the acoustic guitar recently graduated in May. As a growing musician, she has secured a full time job since graduating, but lost momentum in her music career under these restrictions, she said.

She played a total of three shows at Fatty’s between January and March, and picked back up in June when restaurants reopened.

For the brief moment that Ewald was able to come back in June when indoor dining was allowed, she felt like a whole new person, she said.

“Playing in June after being cooped up in the house for months was seriously freeing,” Ewald said.

A couple weeks ago, a little before Region 1 restrictions were put in place, Dobie spoke to Ewald about scheduling her to perform twice a month again to draw in not only a regular fanbase, but regular customers, she said. Ewald declined to protect her health.

In comparison to the first wave, there seems to be no apparent resumption this second time around for Ewald.

“I think now it’s to the point where no one knows, or can know, when this is going to end,” she said.

When the first wave hit, no one was expecting it to go very long, so there was hope for not only restaurant goers but musicians to play live shows eventually in the near future, Ewald said.

“Now it’s one big question mark that kind of seems like it’ll be never ending,” she said.

While Ewald’s passion prevails wherever she plays, whether that be in front of her mirror or in front of an audience, there’s something exhilarating and extra special about live, authentic singing, and not recording a song five times to make sure it’s “perfect” before posting on TikTok or Instagram, she said.

“You can sit and watch a livestream on your computer, which is no different to listening to an artist on Spotify,” Aubert said. “There’s no magic.”

Before the pandemic, Aubert said he typically attended pop punk concerts, where he was in a room filled with people just like him.

“It’s almost like your brainwaves connect and you’re all on the same wavelength singing the lyrics along with the musician,” Aubert said. “Concerts are a very important part of society and how we communicate emotionally and I think we’re missing out big time right now.”

As a musician, there’s something rewarding about reading an audience’s energy and picking songs they want to wave their flashlights to or sing along to, Ewald said.

“Feeling like you’re interacting with the crowd is not something you can get over Instagram,” she said.

When Ewald had gigs at local bars and restaurants she was constantly practicing to improve and always picking up a new song to learn for her next show. Her drive has slightly subsided because she has no idea when she’ll get to perform again, she said.

Besides a structure that allowed Ewald to progress, social media does not expand her fanbase the same way as live music did. When restaurants posted Ewald on social media, she would get DMs from their competing restaurants saying they wanted her to play at their restaurants as well, she said.

“Local live music is so important to the Dekalb community and truly an irreplaceable aspect of the eating-out life,” Ewald said.

Justine Ewald was a former sales representative for the Northern Star from 2018 to 2020.