Huskies drop to 0-3 after close game 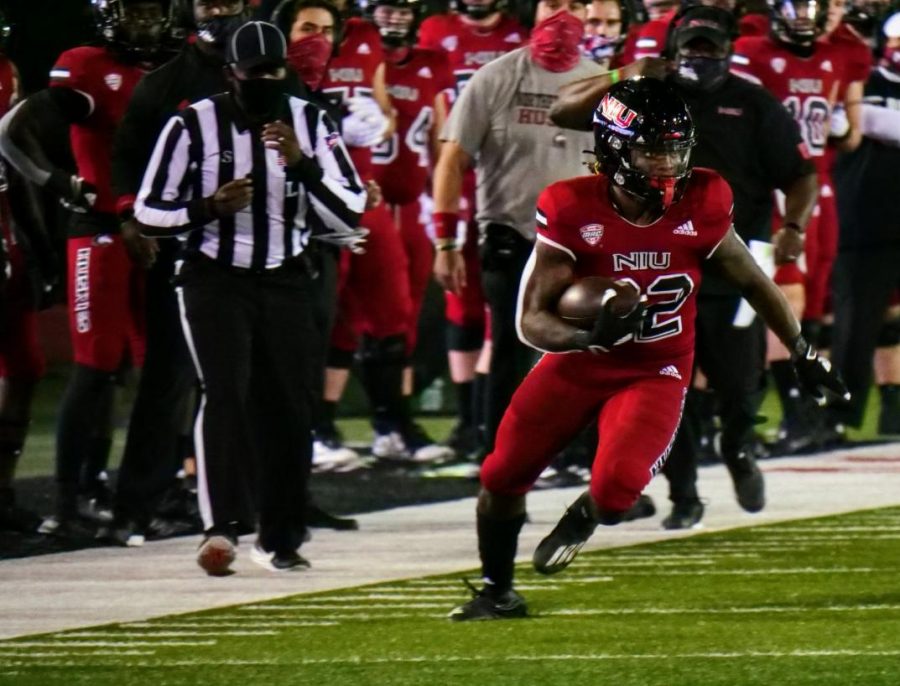 Redshirt first-year tailback Rondarius Gregory escapes defenders Nov. 11, as he runs down the sideline during NIU's 49-30 loss to the University at Buffalo Bulls at Huskie Stadium.

DeKALB — The football team’s strongest showing of the season wasn’t enough to win back the Bronze Stalk from the Ball State University Cardinals Wednesday, losing 31-25 in Muncie, Indiana.

NIU had season highs in several offensive categories and were still in contention to win late before an onside kick in the final minute was recovered by Ball State.

Head Coach Thomas Hammock said he takes pride in the performance of his team despite falling to 0-3 on the season.

“I’m proud of our young men, proud of our coaches,” Hammock said. “They came out with a mindset to try and win the football game. We have to continue to play clean in every phase and we have to play complimentary football.”

Ball State senior running back Caleb Huntley finished with 103 yards on 25 attempts, with NIU struggling to slow the powerful back after losing another key member of their linebacker core.

Redshirt senior linebacker Kyle Pugh was ejected in the third quarter for a targeting penalty, finishing the game with nine tackles. Pugh’s ejection means he will miss the first half of the Huskies next game.

“They tried to get under center and run with their back,” Hammock said. “I thought our defense played well all night. We felt confident, as young as we are, to go toe-to-toe with those guys and this is something we can learn from.”

Redshirt senior quarterback Ross Bowers went 27-for-40 and threw for 300 yards in his best game of the season, but one still blemished with an interception that was returned for a touchdown in the second quarter.

Bowers took the blame for the interception, saying a miscommunication led to the pick-six that ultimately was the difference in the final score.

“This one was totally on me because I really messed up the signal,” Bowers said. “I was thinking it was one thing and our outside receiver saw another. It was a good read and a good route, it’s just not the one that was called. It’s just tough to swallow because it’s such a basic thing. I just screwed up the signal and it’s just so embarrassing.”

Bowers still finished with a career-high in completions and the support of a strong running game. Junior running back Erin Collins rushed for 46 yards and two touchdowns while first-year running back Harrison Waylee led the team in rushing with 63 yards.

Bowers didn’t let the loss and interception totally dampen his mood, saying the offense feels good coming out of Muncie.

“The outcome wasn’t what we wanted and the turnover killed us,” Bowers said. “Other than those two negatives, there’s a lot of positives. It felt like we were a lot more explosive and we could move the ball when we wanted to.”

NIU scored on their opening possession with Bowers connecting with redshirt senior wide receiver Tyrice Richie for a 17-yard touchdown pass. Richie ended the game with 11 catches for 108 yards.

The Cardinals were halted on their opening drive and missed a 42-yard field goal attempt. The NIU defense was assisted with a sack by first-year defensive lineman Devonte O’Malley.

Near the end of the first quarter, redshirt sophomore running back Tye Evans broke off a 46-yard rush into NIU territory.

First-year wide receiver Trayvon Rudolph put the Huskies in a position to score on their next drive with a 47-yard screen catch. Collins rushed for a three-yard touchdown for NIU to retake the lead.

The turnover touchdowns that have plagued NIU in their first two games robbed them of their lead. Bowers threw an interception to graduate cornerback Amechi Uzodinma II that was returned for a 71-yard touchdown to tie the game.

Redshirt sophomore John Richardson missed a 45-yard field-goal attempt as the first half ended, keeping the score 14-14 at halftime.

The NIU defense cut Ball State’s opening drive short with an interception by redshirt junior cornerback Dillon Thomas in the endzone, the defense’s third interception of the year.

Ball State was assisted on their next drive by the Pugh ejection. Cardinals Head Coach Mike Enu took advantage and utilized Huntley to finish the drive with a three-yard rushing touchdown. A missed extra point made it 20-14 to end the third quarter.

Junior wide receiver Yo’Heinz Tyler shined on the following drive for Ball State, getting a 64-yard reception followed by a seven-yard touchdown catch. A successful two-point conversion brought the score to 28-14.

NIU struggled on offense and punted away their first three drives in the second half. On their fourth drive, Collins rushed for a three-yard touchdown

Bowers found redshirt senior tight end Daniel Crawford on a two-point conversion to bring the score to 28-22 with 7:09 left.

The Cardinals bled five minutes of clock on their final possession, finishing it off with a 33-yard field goal by redshirt first-year kicker Jack Knight. NIU tried to quickly make up nine-points, driving down the field and opting to kick a field goal with 44 seconds left.

The Huskies attempted to get the ball back with an onside kick, but the Cardinals recovered and ran the remaining time for the 31-25 win to move to a 2-1 record.

NIU now have extended time off before their next game, a road stint against the undefeated Western Michigan University Broncos on Nov. 28. Hammock said he’s going to use the extra time to get more work in for his younger players.

The WMU game is currently scheduled for kickoff at 11 a.m. central time Nov. 28 in Kalamazoo, Michigan. The game will be aired on ESPN+.