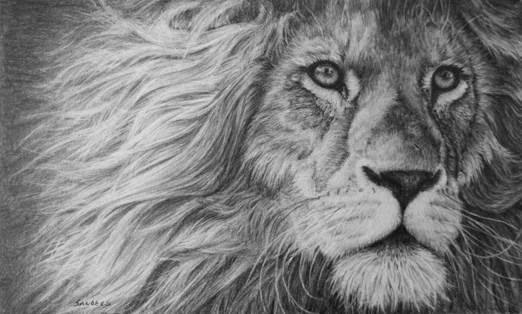 Pamela Sanders' sketch of a lion.

DeKALB – 2020 has been exceptionally hard for small businesses due to COVID-19 resulting in a reduction in hours and preventing people from visiting storefronts. However, DeKalb resident Pamela Sanders, has started a business dedicated to her love of graphite art during the pandemic.

After spending 25 years working in real estate, 60-year-old Sanders decided to form her own online business, Pamela Sanders Fine Art, in Oct. to sell products built upon her sketch art.

“I was looking for a business that was COVID-friendly,” Sanders said, so she created a business entirely online.

Sanders said she is entirely self-taught and one of her earliest memories of her artwork was when her mother discovered stick men all over the cushions. The only reason Sanders wasn’t punished was because Sanders’ mother thought the stick figures looked like they were actually running. This started Sanders’ journey into art.

The idea to create a business first came to Sanders earlier this year when a photographer let her sketch some of his photographs, she said.

Sanders can make about two sketches per week and custom pieces range in price from $250 to $300, depending on their complexity and how many people or animals are in it. To get a quote, customers can email their photos that they are interested in being sketched to pjsanders@comcast.net.

“I try to pick clear pictures that have details,” Sanders said. “The eyes are the most important because the personality lies in them.”

Sanders said she blows up and transfers the photo she receives onto paper and begins to sketch it. Once she has a physical picture, Sanders does a basic sketch and then forms the details of the picture, making sure to do the eyes first because “if you don’t get those right, there’s no point,” Sanders said.

“It was perfect and so beautiful,” Rohrhuber-Mahalas said. “If you have someone or something special in your life and you want it reproduced, it would be in [Sander’s] graphic style.”

Part of Sanders’ style is that she excludes the backgrounds of the original picture and focuses entirely on the subject which makes it “more personable,” Rohrhuber-Mahalas said.

Rohrhuber-Mahalas said she not only loves the sketch, but also posted it on the feeds of Boston Terrier enthusiast groups on Facebook.

Another customer, Tracie Brown, asked for a portrait of her four uncles to be done as a gift for her mother.

“My mom has lost three of her four brothers over the years and was working with some very old pictures,” Brown said. “I was so surprised at how incredible of a job Pam did.”

Sanders also sells products with the sketches printed onto them, including blankets, notebooks, face masks, greeting cards and metal, wood and canvas prints, according to Sander’s website. These products are made by Fine Art America, a company any artist can use to create products based on their work. Every sale made on the site gives Sanders a portion of the proceeds.

Sanders markets herself through her Facebook page where she displays her latest sketches both during their infancy and when they’re finished, according to Sanders’ page. In the future, Sanders said she is hoping to create an Instagram account to further display her work and conduct business.

Sanders said she also relies on word of mouth from her customers and their reactions to her work. While her primary audience consists of people with children and pets, older people have shown interest in the business, according to the analytics of both her website and her Facebook page.

With the business in its infancy, Sanders is looking towards the future of her business and will start by taking one drawing at a time, she said. While Sanders didn’t start her business to make money, having retired after spending nearly three decades in real estate, each sale she makes helps.

“When I finish a sketch, I ask ‘how did I do that,’” Sanders said. “Those little steps I take surprise me everytime.”