Huskies unable to close against Broncos 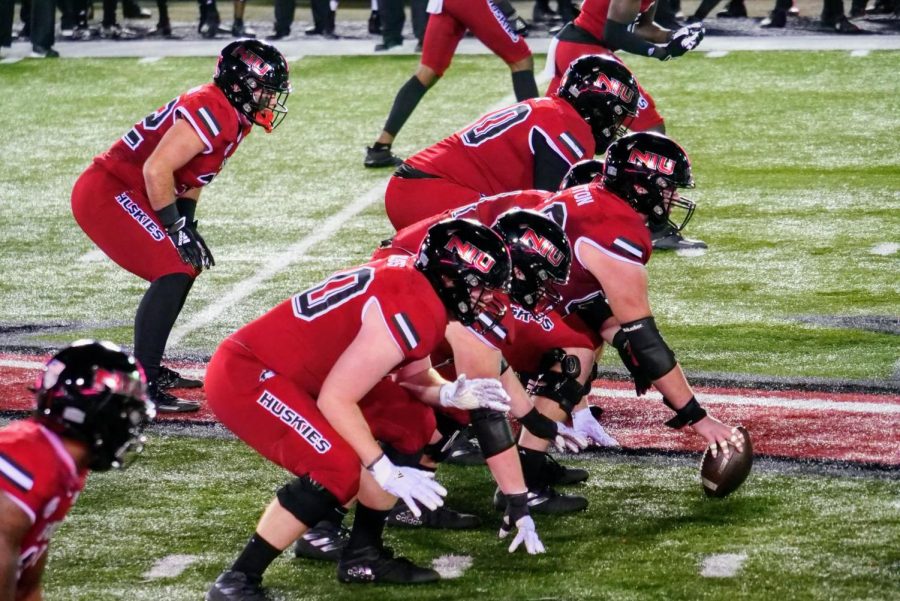 NIU's offense waits at the line of scrimmage for action to resume Nov. 4 during NIU's 49-30 loss to the University at Buffalo Bulls at Huskie Stadium in DeKalb.

DeKALB — The NIU football team came up just short of knocking off the Western Michigan University Broncos on Saturday, losing in a 30-27 nailbiter.

Broncos redshirt sophomore kicker Gavin Peddie kicked a go-ahead 24-yard field goal with 2:23 remaining, ultimately deciding the game as the Huskies’ next drive ended in a turnover on downs.

Head Coach Thomas Hammock said the Huskies were disappointed in falling short of their first win of the season and a potential upset of the undefeated Broncos.

“We were expecting to win this game,” Hammock said. “This stings. It hurts, as it should. But we will respond and we’ll be ready to play next week.”

NIU possessed the ball for 40 minutes and didn’t commit any turnovers for the first time all season. The Huskies defense held an offense in WMU that averaged 50 points a game to three offensive touchdowns and a field goal.

The Huskies also committed three kick catching interference penalties on punts, including one that awarded WMU extra yards on what proved to be the game winning drive.

Hammock said to beat teams with transcendent talent like Eskridge, each department of the team needs to compliment one another.

“We played a team game today,” Hammock said. “Obviously, we have to win on special teams. We’re at the stage where we have to be a complimentary football team until we can get a player that can change the game like they had.”

The final score is the closest NIU has been all season to a victory, but Hammock said the slim margin hasn’t affected the team’s outlook with two games remaining.

“They’re not happy that they played close and they’re not demoralized that they lost the game,” Hammock said. “What I see is a football team that wants to get better and they want to compete and they expect to win. I don’t know what the mentality is outside of our locker room, but we expect to play well, practice well, compete and win.”

Richie said the confidence in the offense is continuing to rise from week to week.

“The offense went out and played the best they could,” Richie said. “We’ve been getting better. The coaching staff has been working us hard. We’re trying to make sure we get everything right and just get better every day.”

Redshirt sophomore Jordan Gandy was the Huskies leading defender, having a team-high seven tackles and matching a school record with five pass breakups.

“Tim Lester came up to me after the game and told me ‘You’ve got a young team that competes their butt off,’” Hammock said. “To me, what a compliment that is. We started seven true freshmen on defense, three on offense, and you couldn’t tell the difference during the game.”

The Huskies took an early lead with a 38-yard field goal by sophomore kicker John Richardson on their opening drive, but WMU didn’t take long to respond.

Junior running back La’Darius Jefferson broke a tackle and outran defenders on his way to a 43-yard touchdown, putting WMU ahead on just three plays in 42 seconds.

In contrast to WMU’s offense, NIU followed with a methodical 18-play drive that took over nine minutes off the clock. The drive was saved with three fourth down conversions, including a fake punt that saw redshirt senior quarterback Andrew Haidet throw a completion to redshirt first-year wide receiver Messiah Travis for the first down.

The Huskies finished the drive at the start of the second quarter with Bowers throwing to Richie for a three-yard touchdown. Richie had six catches on the drive for 48 yards.

Hammock and the Huskies tried to catch the Broncos off guard with an onside kick, but a penalty awarded WMU possession. NIU locked down WMU and forced a 30-yard field goal attempt that missed wide left.

Redshirt senior punter Matt Ference shanked a punt deep in NIU territory and set up a short drive for the Broncos offense. Eleby would score a rushing touchdown from the goal-line, but a missed extra point made it 13-10 for WMU.

Bowers turned up the aggression on the next drive, throwing long completions to redshirt sophomore wide receiver Dennis Robinson and first-year running back Harrison Waylee. Bowers found Waylee on a nine-yard pass to score his second touchdown pass and take back the lead.

The Huskies lead lasted one play, as redshirt senior wide receiver D’Wayne Eskridge returned the kickoff 100 yards for a touchdown to take a 20-17 lead into the halftime break.

The tempo slowed dramatically in the third quarter, with both teams punting away multiple possessions. The only score of the third quarter game on a fade pass from Bowers to Robinson for a three-yard touchdown pass to put NIU ahead 24-20.

First-year quarterback Dustin Fletcher contributed to NIU’s next scoring drive, gaining 19 yards on a rush before the end of the third quarter.

In the fourth quarter, Robinson drew a holding penalty to put the Huskies in field goal range. A 40-yarder from Richardson made it 27-20.

After failing to get a new set of downs the entire third quarter, the Broncos beat NIU down the field with a 57-yard pass by Eleby to Eskridge. Eleby tied the game with a 27-yard touchdown pass to sophomore wide receiver Skyy Moore.

NIU punted their next two possessions, with a kick catching interference penalty drawn by first-year defensive back Zhamaine March giving WMU good field position to start a late drive.  A reception for 14 yards and a rush for 27 by Eskridge set up the go-ahead field goal.

A holding penalty, a sack and a pass off the hands of Richie sealed the game for the Broncos, winning 30-27.

The Broncos now sit at 4-0, one of two undefeated teams remaining in the MAC with two weeks until the conference championship game on Dec. 18.

The Huskies return to DeKalb next week with their final home game of the condensed schedule, hosting the University of Toledo Rockets at 11 a.m. CST Dec. 5 at Huskie Stadium.