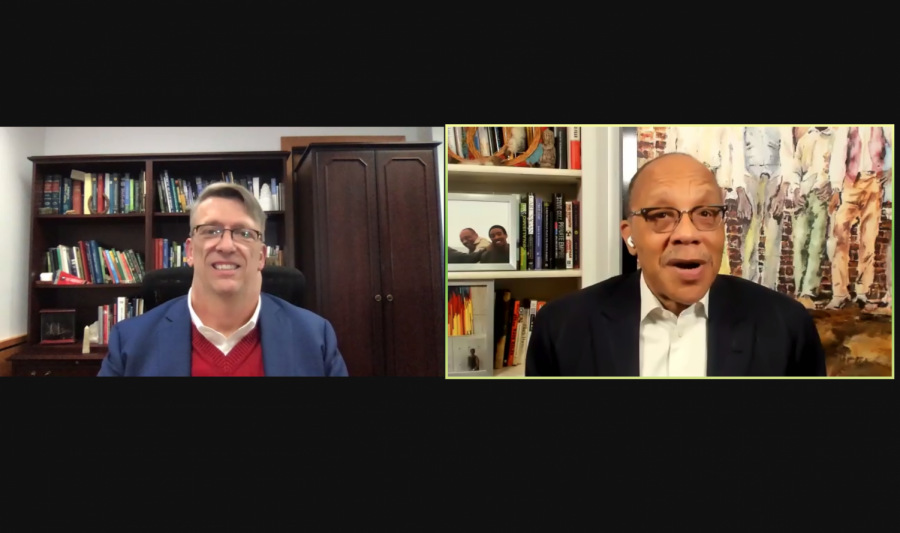 Robert Brinkmann, dean of the College of Liberal Arts and Sciences moderated the event and read off questions for the event.

Robinson discussed multiple points regarding democracy in the U.S. He began by discussing the aftermath of the 2020 presidential election.

“Today’s Republican base is overwhelmingly loyal to Trump,” Robinson said. “That’s just a fact of life for Republican officeholders right now that they’re gonna have to deal with.”

Similarly, Robinson was asked how the Democratic party would evolve following the election.

Robinson explained that the leadership is changing with the Democratic party from older to younger politicians. He discussed that there are older politicians such as President-elect Joe Biden, Speaker of the House Nancy Pelosi and her two deputies. However, he also said, “you have very young voices like Alexandria Ocasio-Cortez who represent an important constituency in the party.”

When Robinson was asked if the Black Lives Matter movement has changed the United States, he was able to recall its impact on diversity in our country.

“I grew up in South Carolina toward the end of Jim Crow. I grew up in a time of segregated everything,” Robinson said. “The arc curve of my life from there, and then I got to write about the first Black president.”

Robinson continued to discuss the size and diversity of people who were protesting for Black lives after the killing of George Floyd this year. He also mentioned that it was an event that changed people, and was part of the reason for the election turnout.

Since the theme of the event was titled “Rebuilding Democracy,” Robinson was asked how young people should try to rebuild democracy.

Robinson suggested that people who want to be involved in rebuilding democratic initiatives should start by getting involved in student organizations that advance civil society.

Brinkmann listed off a few options at NIU and said “we’ve got a great forensics club, a terrific mock trial group, our center for NGO studies,” and more.

Robinson suggested that journalism and student government could also be options for students who want to get involved with civic engagement.

“People who were involved in this kind of activity I think really got a lot out of it,” Robinson said. “Even if that isn’t what they went on to do professionally, I think it made them fuller, better citizens.”