Women’s basketball gets first win of season in Compass Challenge

NIU made a school-record 18 3-pointers 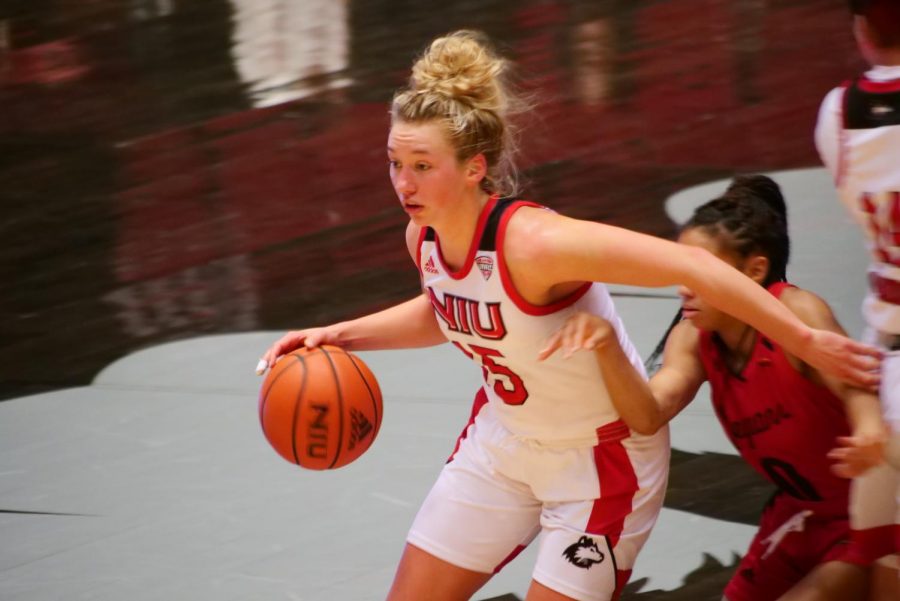 Sophomore guard Grace Hunter stays in front of a defender Nov. 25, during NIU's 85-61 loss to IUPUI at the NIU Convocation Center in DeKalb.

DeKALB — The women’s basketball team picked up its first win of the 2020-21 season Friday, defeating the Eastern Illinois University Panthers 82-72,. With the win NIU’s record is now 1-1 and is one win away from winning the Compass Challenge.

The Huskies also received contributions from red shirt junior guard Janae Possion and sophomore guard Chelby Koker. Possion scored 15 points in her 16-plus minutes of play off the bench, while Koker scored 16 points.

The Panthers jumped out to a 17-4 lead in the first quarter off a great team shooting performance though the first four minutes. During that stretch, EIU went 6-6 from the field and knocked down two 3-pointers.

NIU did not fare as well early in the first quarter as they only knocked down two shots in four minutes. The Huskies did cut the Panther’s lead down to eight at 22-14 with 10 seconds left in the quarter after a 3-point field goal by Koker.

The Panthers were able to hold off NIU’s late push in the second quarter and held a 33-27 lead into halftime. EIU was led by Wahl and sophomore guard Lariah Washington with four points each.

NIU’s top performer in the second quarter was Hunter with five points.

The Panthers did not have similar success in the third quarter, only posting a 37.5% shooting percentage. NIU extended their lead to eight at 59-51, on a 3-pointer by Hunter with less than a minute to go in the quarter.

The deficit was too much for EIU to overcome and NIU would go on to win 82-72.

NIU was led by redshirt senior guard Paulina Castro with six points and three assists. EIU’s top performer in the fourth quarter was Wahl with 10 points.

The Huskies next game will be 2 p.m Saturday against the Western Illinois University Bulldogs in Charleston. That game will be streamed on ESPN+.