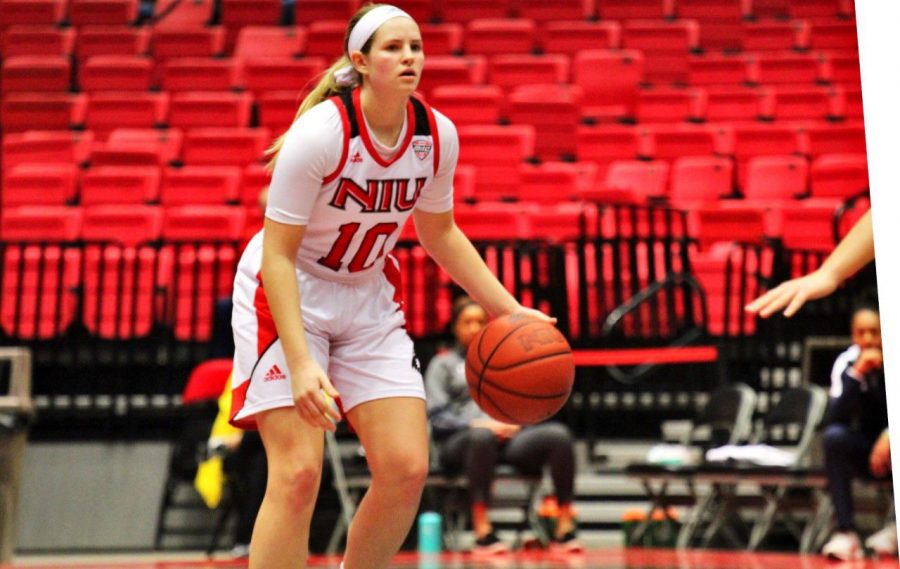 Then-first-year guard Chelby Koker brings the ball up the court in the Huskies Jan. 15 loss to Kent State University at the Convocation Center.

DeKALB — The women’s basketball team earned its second win of the season Saturday, sweeping the weekend at Eastern Illinois University.

The 3-point field goal was a huge factor for both teams, combining to shoot 42.1% from behind the 3-point arc. NIU’s top performer was sophomore Chelby Koker with a career-high 25 points and nine rebounds.

NIU tied the game up 27-27 early in the second quarter after a lay up by Koker. The Huskies would go on to take the lead 35-32 after a 3-pointer by redshirt senior guard Paulina Castro.

The Leathernecks retook the lead 41-40 after a 6-0 scoring run finished off by a layup from Lutz.

WIU took a 41-40 lead into halftime led by Zars with six points and four rebounds. NIU’s top performers in the second quarter were Possion and Koker with six points each.

The Leathernecks extended their lead to 47-40 in the third after going 3-3 to start the quarter. The Huskies tied the game 47-47 after Possion completed a three-point play at the free throw line.

NIU re-took the lead 49-47 on a 3-pointer from Possion with a little over three minutes left in the third quarter.

NIU extended their lead to double-digits at 69-59 in the fourth quarter after a 3-pointer by Koker. The Huskies shot the ball well in the quarter, posting a 42.9% shooting percentage from the floor.

WIU did not fare as well in the fourth quarter, only posting a 38.9% shooting percentage from the floor. The deficit was too much for the Leathernecks to overcome and the Huskies went on to win 79-67.

NIU’s next game will be 6 p.m Thursday against the University of Toledo Rockets in DeKalb, at the NIU Convocation Center.