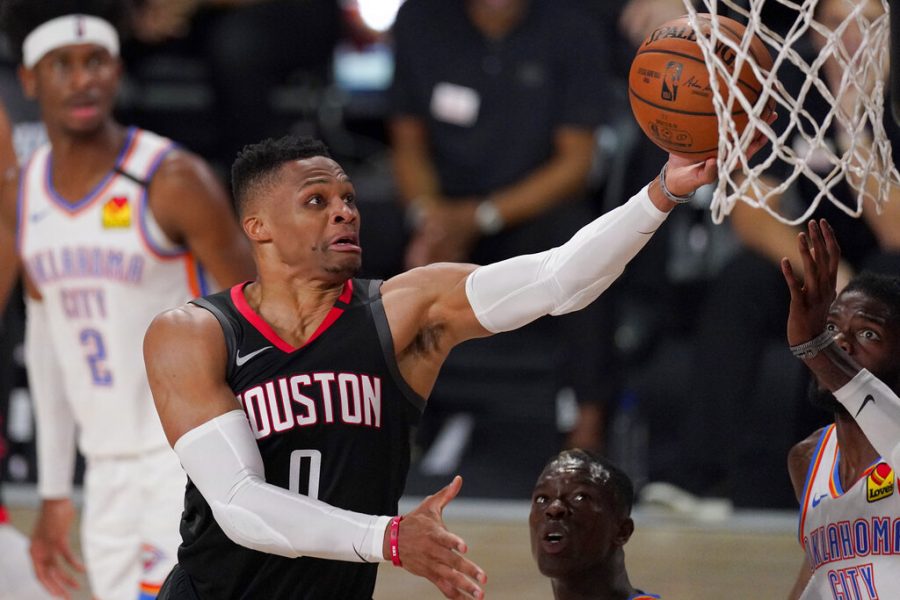 FILE - In this Wednesday, Sept. 2, 2020 file photo, Houston Rockets' Russell Westbrook (0) goes up for a shot as Oklahoma City Thunder's Nerlens Noel, right, defends during the second half of an NBA first-round playoff basketball game in Lake Buena Vista, Fla. The Houston Rockets have traded Russell Westbrook to the Washington Wizards for John Wall and a future lottery-protected. first-round pick. Both teams announced the trade Wednesday night, Dec. 2, 2020.

DeKALB — Whether it is multiple top-25 college basketball upsets, the Huskies women’s basketball team winning two games straight or all of sport cancellations due to COVID-19, this week gave us a lot of entertainment in sports.

In the Mid American  Conference, The Huskies fell to the University of Toledo with NIU redshirt senior quarterback Ross Bowers throwing for 273 yards in the loss.

Villanova University defeated the University of Texas in the Big East vs Big 12 conference battle.

Some notable upsets from the past week were the University of Missouri defeating the 21st-ranked University of Oregon Wednesday. Also, Marquette University upset the fourth-ranked Wisconsin Friday and Georgia Tech University defeated the 20th-ranked Kentucky Sunday.

The game between first-ranked Gonzaga and second-ranked Baylor was cancelled Saturday hours before tip-off due to COVID-19 concerns.

The Huskies will try to win their first game of the season this weekend on the road against Eastern Michigan University. Kickoff is 11 a.m. Saturday on ESPN3.

Buffalo will try to remain undefeated as they will play Akron University for their first game as a ranked team in school history.

The University of Miami will play UNC in a top-25 ACC conference matchup and LSU will play  Florida, as the game was postponed earlier in the season.

This week is the Big 10 vs ACC showdown in college basketball. Some big games are Creighton University taking on Kansas, UNC taking on Iowa, Michigan State taking on the University of Virginia and Illinois taking on Duke.

The Huskies will play Ball State University Tuesday at the NIU Convocation Center. The game will be broadcasted on ESPN3.

On Sunday, the Huskies will take on the third-ranked University of Iowa Hawkeyes on the road. That game will be broadcasted on Fox Sports 1.

In the NFL, the Detroit Lions defeated the Chicago Bears. The Bears have now lost six straight games. The New York Jets remain winless with a three point loss to the Las Vegas Raiders. The Los Angeles Rams defeated the Arizona Cardinals to take the lead of the NFC West division and the New York Giants upset quarterback Russell Wilson and the Seattle Seahawks.

On Sunday Night Football, Patrick Mahomes and the Kansas City Chiefs defeated the Denver Broncos. The game was a lot closer than some expected but the Chiefs won with Patrick Mahomes throwing for over 300 yards and improved to 11-1 on the season.

NBA point guards Russell Westbrook and John Wall were swapped for each other Wednesday.

Westbrook was sent to the Washington Wizards from the Houston Rockets in exchange for Wall and a future pick. Westbrook was an All-Star in his lone season with the Rockets after being traded the previous offseason from the Oklahoma City Thunder.

Wall, a five-time All-Star with the Wizards who drafted him in 2010, will make his first appearance on-court since Dec. 29, 2018 this month after missing much of the last two seasons with heel surgery and a torn Achilles.