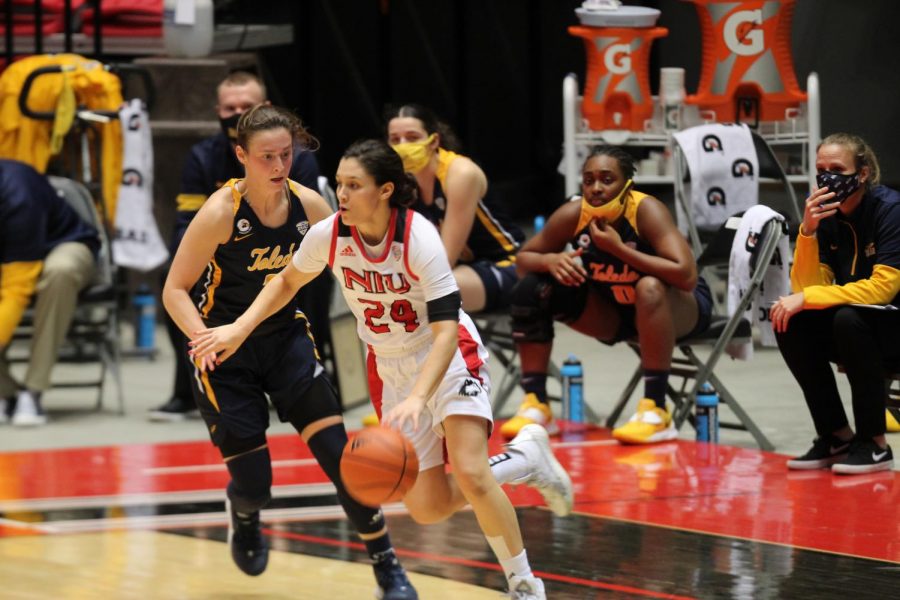 DeKALB — The women’s basketball team lost 82-79 to the University of Toledo Rockets Thursday at the NIU Convocation Center in DeKalb. This was the first game in Mid-American Conference play for the team.

The Huskies started off slow, trailing 10-0 three minutes into the first quarter, but Koker was able to break the scoring drought, putting the Huskies on the board. NIU trailed the Rockets 19-13 after 10 minutes of play.

In the second quarter of action, NIU outscored Toledo 20-15 to pull within one heading into halftime. The Huskies were led in scoring by guards Poisson, Koker and redshirt senior guard Paulina Castro who all had seven  points at the half. Koker also led the team in rebounds with seven.

NIU led the half in rebounds, but on the offensive glass the Rockets were outmuscling the Huskies 8-4. The largest margin of difference came from turnovers and the points scored off those mistakes. In the first half, NIU turned the ball over 11 times in 20 minutes of play.

The Rockets were led behind sophomore guard Sophia Wiard who tallied 17 points and three rebounds in the first half of the contest.

The Huskies came out strong to start the second half, going on an 8-2 run in the first three minutes, giving NIU its first lead of the game, but Toledo quickly knotted things up on a 3-point field goal by Wiard.

The Rockets held a one-point, 42-41 lead at the third quarter TV timeout after Wiard connected from 3-point range once more. Through three quarters Wiard led all shooters with 25 points.

The Huskies found their own hot hand from outside the arc. Poisson hit back-to-back 3-pointers to give the Huskies a 51-48 lead with a minute remaining in the quarter, but the Rockets continued to press and tied the game at 52 points apiece at the buzzer.

After going tit-for-tat with each other to start the final quarter of action, the Huskies were forced to regroup after three consecutive 3-pointers gave Toledo a 69-62 lead with just over six minutes remaining in the game.

The remainder of the quarter saw this same narrative with the Rockets holding a one-point 80-79 lead with 18.9 seconds remaining in regulation. After a Rocket foul that sent sophomore A’Jah Davis to the free-throw line, the Huskies had one last chance at victory with eight seconds remaining.

The Huskies’ hopes fell short after a turnover on the following inbound pass and subsequent squandered possession as time expired.

The Huskies fall to 2-2 on the season and 0-1 in the MAC. The team is scheduled to travel Sunday to Renaissance Coliseum in Peoria to take on the Bradley University Braves. Tip-off is set for 2 p.m.

NIU’s next home game will be 6 p.m. Dec. 16 against conference opponent, the Ohio University Bobcats.