Football team looks ahead to final game of season Saturday 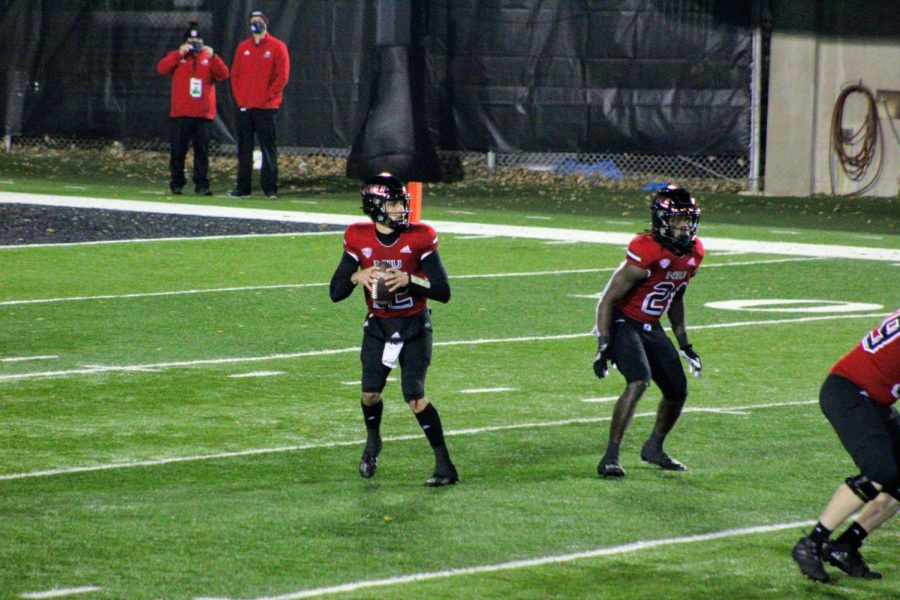 DeKALB — The Huskies football team have left the field the past five games with a bad taste in their mouth, but victory will taste sweet if they end their season with a win Saturday over the Eastern Michigan University Eagles in Ypsilanti, Michigan.

NIU, having started their COVID-19-shortened season 0-5, faces the pressure of needing a win against EMU to avoid their first winless season since 1997.

“With this team you don’t really look for outside motivation,” Crawford said. “The motivation is getting better every day and coming to work with our teammates. We’ve been coming in since the summer and building these habits, and I feel like that’s enough motivation in itself. Just the fact we’re together every day, working hard together. That’s juice right there.”

Head Coach Thomas Hammock said he sees the motivation in his team heading into their season finale. Hammock looks to avenge a 45-17 loss last season in his first coaching tilt against EMU.

“I’m sure they’ll be fired up for their senior day, but we’ll be ready and we’re excited to make the road trip,” Hammock said. “We’re looking forward to having one more opportunity to play on Saturday.”

Hammock said his team can apply a lot of knowledge from their most recent loss against the University of Toledo Rockets. Tied at 24-24 entering the third quarter, NIU gave up 17 unanswered points to the Rockets and stalled offensively.

“They did a good job scheming us up in the second half,” Hammock said. “It was a good football game to learn from. I think we took some things we can do better this week against Eastern Michigan, which is a very good football team.”

The Huskies secondary had a mixed performance against Toledo’s sophomore backup quarterback Carter Bradley, picking him off twice while also allowing 432 passing yards. NIU first-year safety Jordan Hansen got his second interception of the year last week, but he said the focus is on everyone playing their part.

“We just play better as a unit in general knowing not every play is your play,” Hansen said. “You just have to get to your gap or assignment and know if the ball comes to you that you’ve got to make a play.”

Notable in his absence against Toledo was sixth-year senior linebacker Kyle Pugh. Pugh suffered an arm injury in the WMU game, but Hammock “fully anticipates” him to play Saturday.

Hammock also said redshirt junior wide receiver Cole Tucker is “looking good” after a nagging injury kept Tucker on the sidelines during Toledo despite suiting up.

NIU goes against an Eagles team that has had their fair share of growing pains with a 1-4 record. The Huskies roster boasts 81 underclassmen while EMU has 70.

Hammock has pointed to EMU as a team that mirrors the Huskies in terms of dealing with the task of developing young talent, with the only difference being the Eagles’ one victory. EMU defeated the Western Michigan University Broncos 53-42 this past week at home.

“Their games have probably mimicked our games in a lot of situations,” Hammock said. “Last week they were able to pull it off. I think a big part of that is being able to get turnovers. We would have loved to get turnovers against Western Michigan but it didn’t happen. This is a good team, a young team.”

EMU junior quarterback Preston Hutchinson played a big part in the upset win over WMU, finishing with 315 passing yards and four touchdowns in total. Hutchinson has been hard for teams to stop because of the Eagles’ ability to fake out defenses, Hammock said.

“They have an offense built around their quarterback,” Hammock said. “[Hutchinson] is a very dynamic player. I don’t think anyone’s slowed him down this season. You try and load up against the run, [and] they’ll throw it. If you try to load up against the pass, they’ll run it. I think we have to try and force them to go the long way. Don’t want to give up cheap plays.”

Crawford said the Huskies will look to their running backs to break open the game against an Eagles defense that gives up an average of 250 rushing yards per contest.

“We have to execute and take care of the football like every other week,” Crawford said. “We also have to be able to run the football. They run a lot of quarters coverage and I feel like if we can run the football then the passing game will open up.”

The timing of the EMU matchup means NIU can hang their hat on three things: To start, first-year running back Harrison Waylee will be riding the momentum of first career rushing touchdown and 100-yard rushing game against Toledo.

Second, one of Hammock’s victories in his opening year as head coach last season came in the final game of the year, a 17-14 win over WMU that saw NIU run the ball 47 times.

Finally, the weather may be a major factor for the first time this season. Practice in the elements may make perfect for the Huskies as Accuweather forecasts for Saturday show an 80% chance of rain in Ypsilanti.

“We haven’t practiced inside all year,” Hammock said. “It’s been cold and rainy. It snowed. It’s been hot, sunny, all of those things. We’re fully prepared for the elements and are going to try and play our best football game.”

Kickoff for the game is scheduled for 11 a.m. CST Saturday with the game being broadcast on ESPN3.