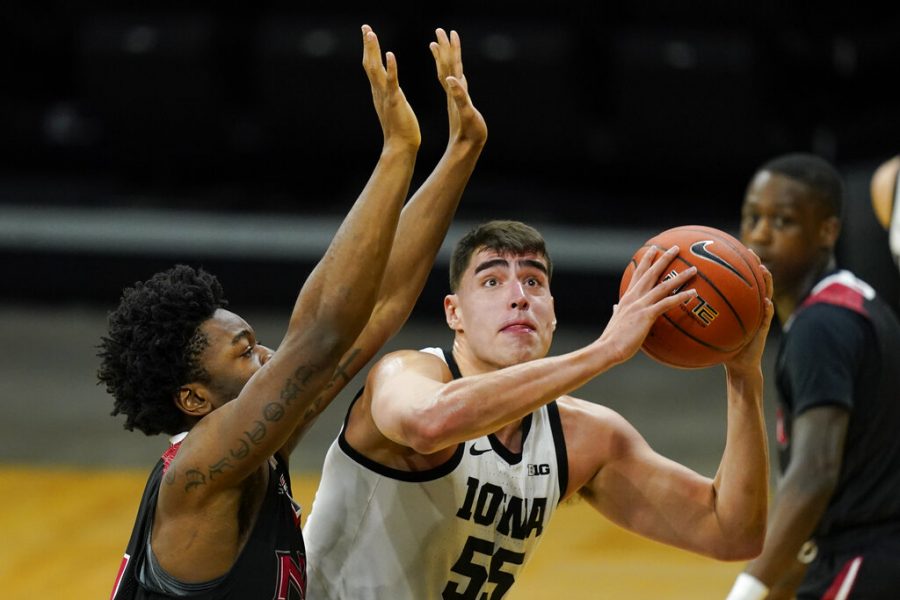 Iowa center Luka Garza drives to the basket ahead of Northern Illinois forward Chinedu Okanu, left, during the first half of an NCAA college basketball game, Sunday, Dec. 13, 2020, in Iowa City, Iowa.

Iowa City, IOWA — Men’s basketball fell 106-53 against the third-ranked University of Iowa Hawkeyes, Sunday at Carver Hawkeye arena in Iowa City. NIU falls to 0-5 on the season, and 0-4 in non-conference play.

NIU was led by junior center Adong Makoui with a career-high 14 points and four rebounds. Redshirt sophomore Anthony Crump contributed 10 points and five boards as well for the team.

Iowa was led to victory behind senior center Luka Garza who tallied 23 points and eight rebounds in just 20 minutes of action. Junior guard Joe Wieskamp also threw in 20 points in the same amount of minutes for the Hawkeyes.

The Huskies came out firing against the Hawkeyes to start the game, taking an 8-6 lead into the first TV timeout.

Though contested in the first five minutes of play, NIU seemed no match for the third-ranked Hawkeyes who went on an 18-5 run into the four-minute TV timeout.

The Huskies seemed outmatched in the first half, shooting 36% from the floor and 0-6 from behind the arc.  NIU’s leading scorer in the first half was Makoui with eight points and two rebounds.

Iowa was led in the first half by Garza who had 14 points and five rebounds. Wieskamp also notched 12 points for Iowa before heading to the half.

The halftime score was 51-27 in favor of Iowa, who was set to receive the opening possession coming out of the half.

NIU’s first half woes continued into the start of the second half where the team struggled to get shots to fall from outside.

The Huskies failed to connect from 3-point range until just after the 15-minute mark of the second half when junior guard Trendon Hankerson connected from downtown, cutting into the 61-32 Hawkeye lead.

After the 10-minute media timeout, Iowa Head Coach Fran McCaffrey pulled his starting five and sent in his bench while the Hawkeyes had a commanding 79-35 lead.

The second half saw the Huskies gain a bit more success from the floor. With eight minutes remaining in the game, the Huskies were shooting 25% from 3-point range.

Small victories are all that can be taken from a box score that saw NIU shooting 34% from the floor and 13% from behind the arc.

The Huskies return to action 6 p.m. Dec. 18 against Chicago State University in DeKalb on ESPN 3.