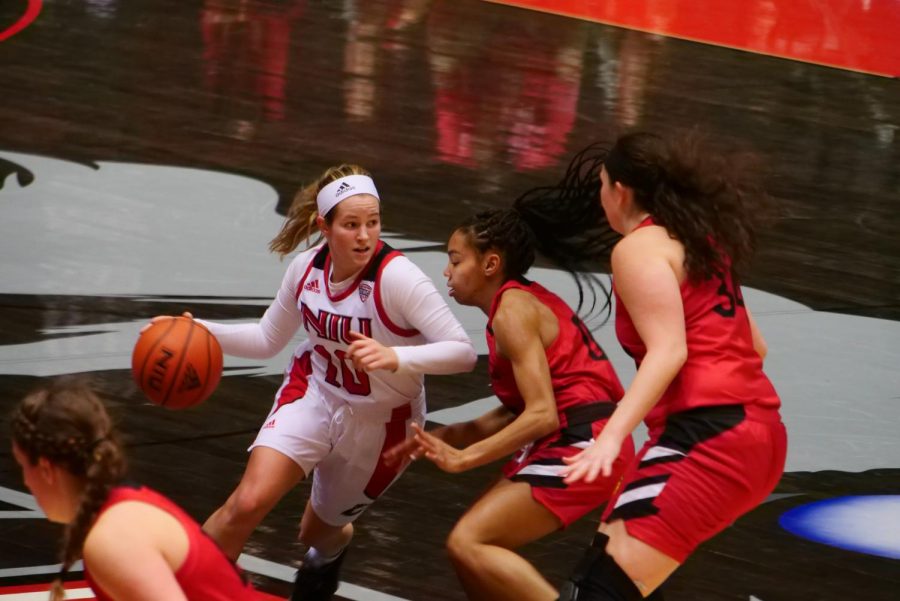 DeKALB — The women’s basketball team drops to 2-4 on the season after a 77-67 loss to the Ohio University Bobcats Wednesday. NIU had issues with the Bobcats smothering defense, which forced NIU into 13 first half turnovers.

Possion scored 12 points off the bench for the Huskies, while Davis scored 12 points and grabbed nine rebounds. Davis has been a key factor in NIU’s ability to control the boards where she has grabbed 24 rebounds in the last three games.

Ohio would maintain the lead for the remainder of the second quarter and took a 33-31 lead into halftime. Ohio was led by Hooks and Jonson with five points each, while NIU’s top performer was Koker with five points.

Both teams battled for control early in the third quarter, as there were four lead changes in the first three minutes of play. Ohio took a 41-37 lead after a layup by Hooks with a little over six minutes left to play.

From that point on it was all Bobcats in the third quarter as the team shot 52.6% from the floor and scored 27 points. NIU did not fare as well as they only made 38.1% of their attempts from the floor.

The Bobcats extended their lead to 69-56 early in the third quarter, after a layup by Mace. NIU was able to cut that deficit down to 72-62 after a free-throw by Koker with under three minutes of play.

Though the Huskies last push was not enough,the Bobcats went on to win 77-67.

NIU’s next game is 2 p.m. Sunday against the Michigan State University Spartans in East Lansing, MI. That game can be viewed on ESPN3.

The Huskies next home game is 1 p.m Jan. 2 against the Western Michigan University Broncos at the Convocation Center.