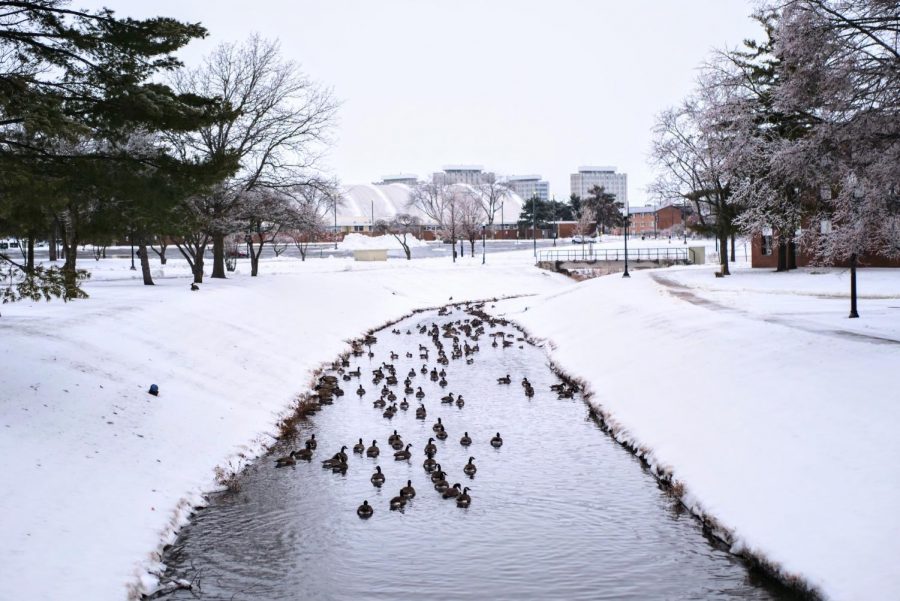 Geese flock to the lagoon on Dec. 30.

DeKALB – The week of Feb. 1 is going to be sunny but cold, with temperatures remaining below freezing for most of the week, according to the National Weather Service.

Monday will be mostly sunny with a near high of 27 degrees. Gusts from a north-westerly wind may reach speeds as high as 20 mph. Monday night will be cloudy with a low of around 19 degrees.

Wednesday will be mostly sunny with a high near 29 degrees and light varying winds of about 5 to 10 mph in the morning. Wednesday night will be mostly cloudy with a low of 25 degrees.

Thursday will see an 80% chance of snow possibly mixed with freezing rain before 1 p.m., followed by a wintry mix of rain and snow throughout the afternoon. Rain alone will continue after 4 p.m. due to a daily high of 35 degrees. Thursday night will be breezy and mostly cloudy. Rain is likely before 7 p.m. and will possibly be followed by more snow.

Friday will see a return to partly sunny conditions with a breezy high of 17 degrees. Friday night will be mostly cloudy with a low of around 6 degrees.

Saturday has a slight chance of snow and will be partly sunny with a high of 14 degrees. Temperatures will drop to below zero on Saturday night, with an estimated low of -4 degrees and mostly cloudy skies.

Sunday has a slight chance of snow and will be partly sunny and cold with a high of only 5 degrees.