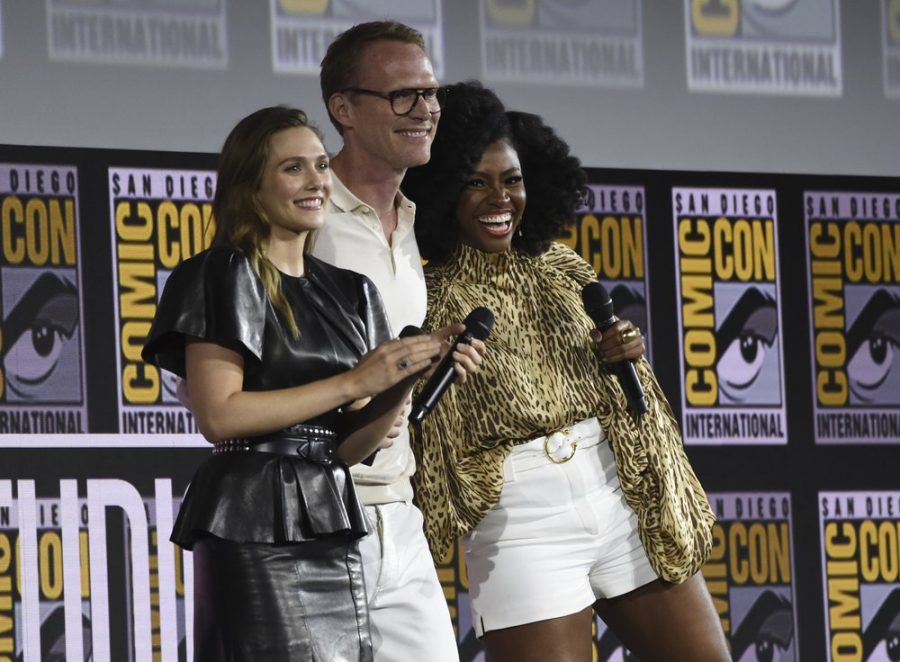 After a year-and-a-half of no new content from the Marvel Cinematic Universe, and with films like “Black Widow” and “Eternals” being pushed back due to the COVID-19 pandemic, the Disney+ original series “WandaVision” has been nothing but a breath of fresh air. With a crazy premise and an intriguing execution, this show keeps getting more interesting with each episode, and the series is only halfway over with four out of nine episodes released.

Unlike most streaming services, which drop all the episodes of a season at once for audiences to binge-watch, the original series on Disney+ has one episode released per week. While this system is better because it causes the storyline to be more drawn out, it can make people forget what has happened with each passing episode.

So, in the interest of clarity, here is a recap of the first four episodes of “WandaVision.”

Before going into the series, let’s remind viewers of what in the MCU has affected this series.

Background: The series stars a superpowered woman named Wanda Maximoff and a highly intelligent android called Vision, played by Elizabeth Olsen and Paul Bettany, respectively, who both made their debuts in “Avengers: Age of Ultron.” During “Age of Ultron,” Wanda, Vision and Wanda’s brother Pietro, played by Aaron Taylor-Johnson, who was incredibly fast, joined the superhero team and defeated a robot named Ultron who wanted to destroy all life on Earth. During the battle, Pietro was killed by Ultron and Wanda and Vision killed off Ultron.

In “Avengers: Infinity War,” the pair entered a romantic relationship by the time the biggest MCU villain Thanos, played by Josh Brolin, started hunting down the six Infinity Stones in a quest to destroy half of all life in the universe.

Since Vision is powered by the Mind Infinity Stone, the Avengers try to find a way to remove the stone without killing him. However, Thanos overpowers the Avengers and collects all six Infinity Stones, kills Vision to obtain the Mind Stone, places the stones on his Infinity Gauntlet and snaps his fingers. This causes half of all life in the universe to be instantly turned to dust including half of the Avengers and Wanda.

In “Avengers: Endgame,” the remaining Avengers band together five years later, manage to undo the Snap and bring everyone back. In an epic battle which sees the Avengers and their allies face off against Thanos and his massive alien army, Tony Stark, aka Iron Man, played by Robert Downey Jr., uses the Infinity Stones to destroy Thanos and his forces at the cost of his own life. The last time Wanda was seen before “WandaVision” was at Tony’s funeral where she grieved not only for her comrade but for Vision as well.

Episode 1: The first episode plays out very much like a classic sitcom of the 1950s, like “I Love Lucy,” and sees Wanda and Vision, who’s somehow alive, living a suburban life as newlyweds in the black-and-white, 4:3 ratio town of Westview. The episode, for the most part, is very straightforward with Vision trying to impress his boss at a dinner while Wanda tries to cook dinner as the pair try to conceal their powers.

The series also introduces the recurring character of Agnes, played by Katherine Hahn, who is Wanda and Vision’s nosy neighbor and a great source of comedy. The first episode certainly details how the series pays homage to classic sitcoms but also makes fun of the stereotypes of the time period like having Vision work in a meaningless job and Wanda have a lack of enthusiasm for being a 1950s housewife.

While the episode is fine, the end of the episode has an underlying dark tone that hints this existence isn’t quite right. When Vision’s boss, played by Fred Melamed, starts choking on his food, his wife, played by Debra Jo Rupp, repeatedly says “stop it” as if he’s pretending, and the tone becomes very slow.

Vision uses his powers to save his boss, the guests leave and Wanda and Vision enjoy their life together. The end of the episode also sees someone watching Wanda and Vision’s activities as a sitcom, showing that Wanda and Vision might be trapped in a fake television show like in the film “The Truman Show.”

Episode 2: The second episode of the show takes place in the 1960s, but still in a black and white environment. This episode is definitely more comedy focused than the previous episode as Vision and Wanda are going to compete in the neighborhood talent show as a magician and his assistant. However, Vision is given a stick of gum and, being an android, it literally “gums up his works” and he acts like he’s drunk, resulting in some hilarious comedy.

The series then introduces a character called Geraldine, played by Teyonah Parris, who becomes friends with Wanda. Eventually, Wanda removes the gum from Vision and then she is revealed to be pregnant as the series turns to color as the decade changes to the 1970s.

Once again, while the episode is seemingly innocent, there is a dark tone that appears in small doses. One instance sees a radio playing The Beach Boys be intercepted by a transmission with a voice speaking directly to Wanda and asking her “who’s doing this to you?” The episode ends with the series changing into the 1970s but before then, Wanda sees a sinister man in a beekeeper suit and time reverses to before she saw him. Based on this, it’s clear that this life Wanda and Vision are living is an illusion.

Episode 3: This next episode is set in a 1970s aesthetic, as Vision and Wanda are expecting children and, despite only being pregnant for a few days, Wanda has progressed rapidly. At the episode’s beginning, she appears to be 6 months pregnant.

With Geraldine’s assistance, she helps Wanda give birth to two twin boys, named Tommy and Billy and Wanda and Vision are happy parents. However, breaking the benign characterization of most of Wanda and Vision’s neighbors,  Geraldine mentions Pietro and how he was killed by Ultron. Wanda then becomes angry and uses her powers to expel Geraldine from the town limits which is revealed to be surrounded by a semi-solid forcefield. As Geraldine lies outside the town limits, she is surrounded by unknown agents.

Episode 4: Breaking with the formula of the previous episodes, the fourth episode of “WandaVision” doesn’t focus on Wanda or Vision. Instead, this episode shows the events leading up to previous episodes with the main focus being on Geraldine and her origins.

In the show’s opening, Geraldine is revealed to be Monica Rambeau, who was featured as a little girl in the 1990s set film “Captain Marvel.” It also reveals that Monica was one of the many victims of the Snap as she rematerializes after the events of “Avengers: Endgame.” She reappears in a hospital and runs around a panicked hospital as many people spontaneously reappear. Three weeks later, she returns to work at S.W.O.R.D., an intelligence agency similar to SHIELD, which brought the Avengers together in their first film.

She is sent on assignment with Jimmy Woo, played by Randall Park, who was Ant-Man’s parole officer in “Ant-Man and the Wasp” to investigate the town of Westview which has had everyone go missing. The pair arrive at the town limits and Monica enters the town through the forcefield and then disappears.

Jimmy Woo calls in S.W.O.R.D. and they set up a perimeter to try and figure out what’s going on. Among the many scientists called in is Darcy Lewis, played by Kat Dennings, an astrophysicist from the first two “Thor” films who detects a harmless amount of radiation coming from town which is also emitting broadcast signals. She gets an old tv and uses it to pick up the signals which is revealed to be the “WandaVision” sitcom which means that she was the viewer seen at the end of the first episode.

Jimmy and Darcy then try to send a radio message into town which reveals that Jimmy was the one talking to Wanda in episode two. When Geraldine is removed from the town at the end of episode three, she meets Jimmy and Darcy and reveals that Wanda is creating this illusion and that Vision is, as of now, still dead.

Unlike the previous three episodes, which had simple set-ups, the fourth has so much going on. This episode not only explains the mysterious events of the previous episodes but also depicts the ramifications of “Avengers: Endgame” from a civilian viewpoint which helps deepen the MCU. It also takes the series in a darker direction and makes the future of the season all the more intriguing.

As of now, “WandaVision” is an incredible addition to the MCU and, while we eagerly await the upcoming films and assorted series, it’s a great return to a franchise that has been gone for too long.