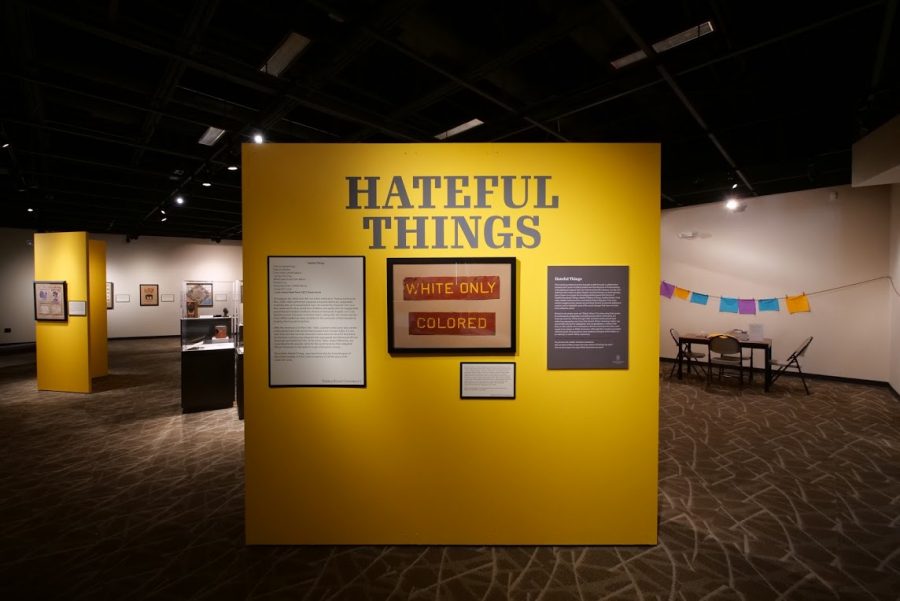 The display wall of the Hateful Things Exhibit showcases a sign saying "white only" and "colored" along with information about the exhibit. The exhibit is located at the Pick Museum in Cole Hall.

The traveling Hateful Things Exhibit from the Jim Crow Museum of Racist Memorabilia at Ferris State University opened up at the Pick Museum of Anthropology on Monday and will be open until April 9.

The exhibit displays some of the most hateful and racist items imaginable aimed at Black people  in America’s history. Hateful Things is an eye-opening experience that reminds its visitors that most of these items weren’t from that long ago in American history, and society as a whole has the power to make our country a better and more accepting place.

The exhibit opens up tackling hateful advertising that ranges from the 1800s to the 1900s. Many of the companies marketed their products using stereotypical images and anti-Black racial slurs,including mainstream products like Aunt Jemima, Cream of Wheat and Uncle Ben’s who have since updated their branding. Other brands like Darkie Toothpaste and C**n Chicken Inn took damaging stereotypes to a national and vile level.

The second section looks into hateful media. A lot of hateful images came from the use of black face and casting Black actors in stereotyped roles. There’s a long history of white performers using products like Stein’s black face makeup in Minstrel shows ridiculing Black people. Also on display are various advertisements for world fairs that portrayed Black people as “freaks.” One of the more recent products that is still available to this day is the game Ghettopoly. A parody of Monopoly, the game places players in the roles of pimps, prostitutes, addicts and gangsters with extremely stereotypical and harmful imagery.

One of the toughest sections of the exhibit was hateful children’s things. Most of this exhibit was bothersome, but the objects regarding children were especially tough. Carnival games that had Black children as targets; an extremely racist line of children’s books titled “The Story of Little Black Sambo” were in circulation through the 1960s; and an object titled Alligator bait that displayed the plastic head of an Black baby in the mouth of an alligator.

One piece of art that will undoubtedly stick with visitors of the exhibit was the painting “The Lynched” by Laertis Limnidis. The painting interprets a lynching from the perspective of the victim. It’s a very terrifying piece of art but equally as powerful.

This is just the tip of the iceberg for the exhibit; there’s still so much that wasn’t mentioned or shown. While the feeling of disgust was constantly present because objects of this nature exist, there’s so much to learn from this exhibit. Most importantly realizing society isn’t far removed from the era most of these objects are from but also there’s still so much room for growth in America to make it a place that accepts people of all colors.

Visit the Pick Museum of Anthropology website to register for a free tour of the exhibit.