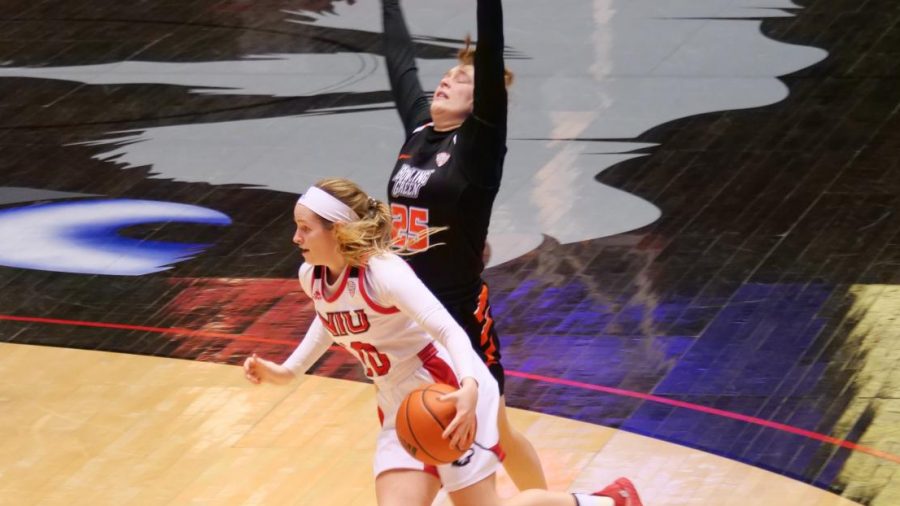 DeKALB — The women’s basketball moved into third place in the Mid-American Conference after picking up another win Monday. The Huskies defeated the Ball State University Cardinals 78-74, moving its record to 8-3 in the MAC.

The Huskies received a stellar performance from sophomore guard Chelby Koker, leading the team in scoring, assists and steals. Koker recorded a career-high 34 points with six steals and four assists.

Hodges scored 10 points while Poisson and Brandon scored nine points each. Brandon also helped NIU control the boards by grabbing 12 rebounds in her 31 minutes of play.

NIU was plagued by turnovers early in the first quarter as they turned the ball over five times in the first four minutes. The Cardinals took full advantage of this and jumped out to a 10-3 lead after a 3-pointer by Sydney Freeman with a little over five minutes left in the quarter.

The Huskies were able to recover from their early woes and took a 11-10 lead after a jumper from sophomore guard Grace Hunter. The remainder of the first quarter was highly contested as the game had two lead changes and was tied once in the quarter’s final four minutes.

After the first quarter the game was tied at 16-16. NIU’s top performer was Poisson with six points. Ball State’s top performers were junior guard Thelma Dis Agustsdottir and sophomore guard Freeman with three points each.

NIU retook the lead 21-18 early in the second quarter after a 3-pointer by Koker with little over eight minutes left in the quarter. NIU’s lead did not last long as the Cardinals retook the lead 22-21 after a layup from Brown.

NIU retook the lead and created some separation 28-22, after a 3-pointer by Koker with a little over four minutes left in the quarter. Late in the second quarter Ball State cut the lead to 32-29 after a jumper by Clephane.

The Huskies took a 32-29 lead into halftime led by Koker with 12 points, while the Cardinals’ top performer was Brown with nine points.

Both teams seemed eager to take control of the game early in the third quarter, as they combined for eight points in the first two minutes. The Cardinals tied the game at 40-40 after a 3-pointer by Freeman.

A 3-pointer from sophomore guard Grace Hunter gave NIU a 47-42 lead with a little under four minutes left to play in the quarter. The Huskies extended their lead to double-digits, 54-44, after a 7-2 scoring run finished off by a layup from Brandon.

The Huskies took a 57-46 lead into the fourth quarter, led by Koker with eight points and one assist. Ball State’s top performer was Clephane with seven points.

Ball State got their offense going and cut the lead to 57-52 early in the fourth quarter, out-scoring NIU 6-0 in the first three minutes of the quarter. The Cardinals did not stop there and tied the game up at 67-67 after a 3-point play was completed by Brown.

A layup from Brown gave the Cardinals a 70-69 lead with a little over a minute left to play in the game. From there, it was all NIU as they outscored Ball State 9-4 in the final minute to secure the win 78-74.

NIU’s next game is 1 p.m Saturday against the University at Buffalo Bulls at the NIU Convocation Center in Dekalb. The game will be available on ESPN+.