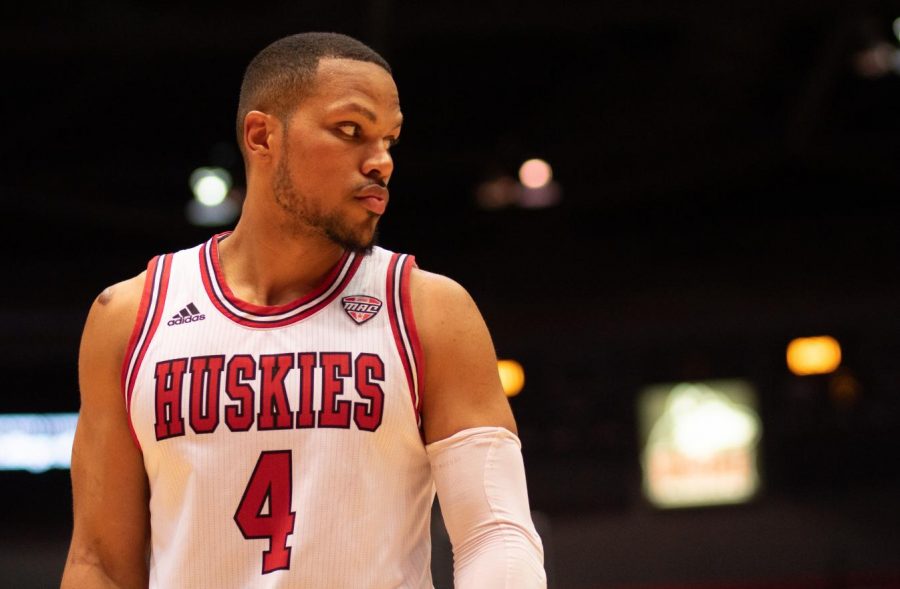 Former NIU forward Lacey James waits for Ball State University to come back down the floor on offense March 6, 2020, during NIU's 75-54 loss to the Cardinals at the NIU Convocation Center in DeKalb. Little did James and the rest of the team know at the time, it would be the final game of their season.

DeKALB — NIU men’s basketball was ready to get over the hump as the 2019-20 NCAA season was coming to a close. For former NIU power forward Lacey James and his teammates, their sights were set on a March Madness berth. Little did James know his college basketball story would be cut short.

James’ college basketball story began in Lawrenceville, New Jersey, at Ryder University as a first-year player. He would transfer to NIU ahead of the 2016-17 season, before making his debut during the 2017-18 season.

The move from Lawrenceville to DeKalb was a bit of a change for him, but a positive one nonetheless, James said.

“It was kind of different because DeKalb compared to where I was in New Jersey, there [were] a lot of restaurants, there was a big mall there,” James said. “So coming over to DeKalb it was different, because DeKalb doesn’t have, as you know, as many restaurants, as many stores, so I would say the campus life of finding food and things of that nature.”

James said his favorite spot to grab a bite to eat not too far from campus was Panda Express during his time in DeKalb. However, since leaving NIU he’s taken notice of another restaurant that’s popped up.

“I’m kinda mad now,” James said. “I saw [in a] news article that they built a [Raising] Cane’s. I remember sometimes I [would run] over to, I think it was the Aurora area, over there to get the Cane’s, because that was the closest Cane’s to NIU. When I heard they had built one across the street from Panda, I was upset that I was not on campus anymore. I wish they had done that while I was there.”

James was an immediate starter his first season at NIU, starting all 32 games he played in. He averaged 5.8 points and 4.7 rebounds his redshirt sophomore season in just over 21 minutes a game.

“As a kid, I traveled a lot,” James said. “So with the guys on a new team, you have to be comfortable being uncomfortable. That was just the situation I was in, but all around it was good though.”

His scoring average jumped to 8 points-per-game, and his rebounding to 6.9 rebounds-per-game as a redshirt junior. By his final season as a Huskie, he averaged 8.9 points, 7.7 rebounds, 0.7 blocks and 0.9 steals to go along with his intimidating post presence for an NIU team primed for a shot at a Mid-American Conference championship.

Over a year ago, the NIU men’s basketball team had just won its Jan. 21, 2020 game against the Kent State University Golden Flashes, 76-69. It was the first win of six in what would become the program’s longest win streak in its time in the MAC. As the season crept into its final months, the Huskies’ confidence was high.

“We had plenty of momentum, we were motivated,” James said. “The year prior, my junior year, we were underdogs if you want to say, coming into Cleveland, so we used that as motivation.”

The 8-10 in conference men’s basketball team had just played its way into Cleveland on March 11, 2019, after defeating the Ohio University Bobcats 80-61 in the first round of the 2019 MAC Championships, at the NIU Convocation Center.

The Huskies would defeat their rival, the University of Toledo Rockets 80-76 on March 14, 2019, before falling to the Bowling Green State University Falcons 71-67 on March 15, 2019, despite rallying from a 23-point halftime deficit.

In 2020, the Huskies weren’t feeding off of an underdog mentality. The team was excited heading into its final two games of the 2019-20 season, with a 10-6 conference record. NIU had a two-game homestand to finish the season, against Toledo and the Ball State University Cardinals.

“We were definitely feeling the momentum,” James said. “Before the Ball State game we played Toledo. We had beat Toledo prior in the season at Toledo, and so we definitely had some confidence, you know NIU-Toledo is kind of like a rivalry thing. So for the last two games of the season, [which were] home games, we were excited to finish out with Toledo. We beat them pretty good.”

The Huskies defeated Toledo in a 71-50 blowout on March 3, 2020. NIU was set to face Ball State for its Senior Night on March 6, 2020. The game couldn’t have been more different for the Huskies, as unlike last game they were on the receiving-end of a 21-point blowout, 75-54.

After the first five minutes of the game Ball State held a 10-0 lead, which former NIU Head Coach Mark Montgomery put bluntly: “They came out the opening four or five minutes and punched us in the face.”

One of the few highlights from the game was an emphatic two-hand jam from James in the second half, but not much else. While the team looked out of sync and defeated early that night, it did little to deter NIU from its bigger aspirations. The Huskies had done enough to secure a first round bye and head straight to Cleveland, along with the title of being the co-2020 MAC West Division Champions.

“We were co-champions,” James said. “We knew we kinda had a target on our back, and we were definitely hungry for more. Definitely hungry to make it to the big dance, because we knew that, when [we played] everybody in the conference, we knew how guys played, performed. We knew how teams operated, so we just had a sense that ‘we have already been through this, we had already played against them.’ So there was definitely a different swagger coming into this tournament.”

The Huskies flew into Cleveland March 10 and practiced the next day at Cleveland State University. The team was preparing for its March 12 game against Miami.

Later that night, James and the team were in their hotel room watching the Dallas Mavericks and Denver Nuggets play on TV. The Sacramento Kings and New Orleans Pelicans were slated to play after them, along with the Utah Jazz facing off against the Oklahoma City Thunder. Something was off during the Mavs’ game, however, and the Thunder-Jazz game was delayed due to Jazz center Rudy Gobert being sick.

“We were in the hotel room, it was late at night,” James said. “Then all of a sudden we got [notifications], our phones blow up, ‘NBA cancelled.’ I was saying ‘that’s a big deal; if the NBA’s cancelled, something is wrong.’ We were kind of worried about that, with our game, how was it going to affect it.”

The team was aware that the Ivy League had cancelled its tournaments the day before due to the growing concern of a COVID-19 pandemic. Now Gobert had just tested positive, being the first NBA player to do so, effectively shutting down the NBA. James and the Huskies were worried about their own tournament now.

Once the MAC gave the all-clear that the tournament would go on as planned on March 12, James’ mindset became solely focused on the upcoming game as the team had its 8 a.m. shootaround. The Huskies were to take court 30 minutes after the end of the first game at Rocket Mortgage FieldHouse, which was taking place at noon. The NBA, coronavirus and the rest of the world were the farthest things from his mind.

The team was preparing to take the bus back to the FieldHouse to prepare for its game when NIU’s Athletic Director Sean Frazier stopped the team. Frazier brought the team into a meeting room, where the team talked about the developing situation. Concern began to grow amongst the team, which separated into the hallway to check to see if any sports media entities had updates, James said.

“Then the athletic director came into the hallway saying ‘hey the whole tournament is cancelled. You guys got to get out of here right away; go back,’” James said. “I would say [we found out] 30 minutes, maybe a little more before our game time.”

The team was packed and on a bus within an hour for a long trip back to DeKalb. All the team was left with on the ride back and the following days were a lot of “what ifs.”

“I was just thinking about what could’ve happened,” James said. “What could’ve [with] us going to the conference tournament to make it to the Big Dance. That was mostly on my mind.”

James said he remained on campus for a few days before joining many other NIU students in returning home as the rest of the spring semester went online and Illinois shut down. With many unknowns happening as the country was entering a pandemic with a virus everyone knew so little about, James wanted to be somewhere comfortable.

James said he stayed busy however, as he had no plans of having his basketball journey end due to the coronavirus.

“I met with a couple trainers in the city area,” James said. “They opened a couple gyms, so I was blessed and able [to] have the option of going to the gym.”

Like everyone else however, when he was away from the gym, he said he passed the time in the early days of the lockdown like many other people: He tuned in every week to watch ESPN’s “The Last Dance.”

“I was so happy that they pushed it forward to have it come out early,” James said. “Making sure I had a gym area and also the Michael Jordan The Last Dance, I watched it all live. It was great, I was like a kid with candy. You couldn’t get me away from the TV.”

James has stayed busy through the last several months, continuing to workout every day and prepare for an opportunity to play pro ball. On March 17, it was announced by BJ Bass via his Twitter account that he would represent James as his agent at RBA Sports.

On Tuesday, NIU Athletics announced James signed with the Surrey Scorchers of the British Basketball League. He follows former NIU teammates Levi Bradley and Dante Thorpe, who played in the BBL last season, across the pond as a professional basketball player.

Despite the way his NIU career ended, achieving the title of co-2020 MAC West Division Champions remains his favorite memory on the court from his time spent in Barb City, James said.

“That’s just something NIU hasn’t done in years,” James said. “So getting that accomplishment, just getting that feeling of knowing you did some history, that’s a great feeling.”

Off the court, graduating from college with a degree joins his team’s on-court accomplishment at the top of the list. James graduated from NIU with a degree in communication. Both are something he said he’ll remember forever.