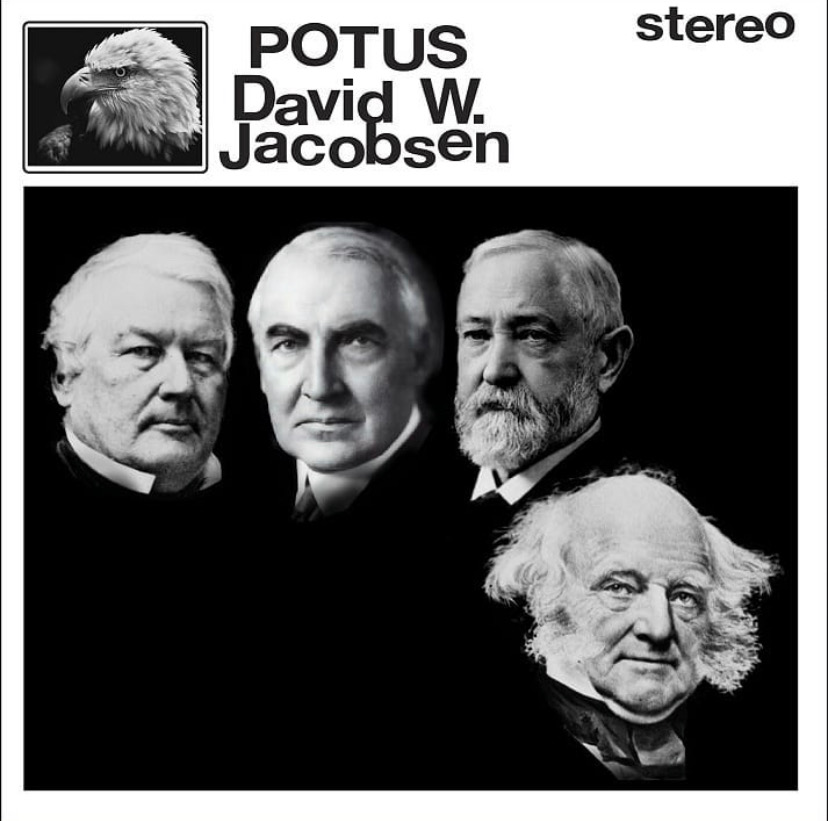 With President’s Day coming up, and during an era of charged political conversation over current U.S. Presidents, New York singer songwriter, David W. Jacobsen has his eyes fixed on past leaders in his latest release “POTUS.” As the name implies, this neo-folk album takes a humorous and satirical approach, shining a light on often overlooked, and at times maligned, American presidents.

Released on Oct. 1, “POTUS” tells the stories of 11 former single term presidents with the intent of combining “history with storytelling,” to provide “a humanized view of men who have guided America for better or worse (more often worse),” Jacobsen said on the website synopsis of the album.

The album flows seamlessly between multiple genres with elements of funk and pop, with bright lead guitar riffs on the song “Crying at Your Grave,” which is a song written from the perspective of William Howard Taft to his predecessor Teddy Roosevelt.

“Crying at Your Grave” comes just two songs after Jacobsen parodies Jimi Hendrix’s classic-rock hit “Purple Haze”, in his feverish song “Samuel Tilden’s Lament.” All of it is glued together by the polished production, jangling acoustic guitars and folk inspired performative vocal leads.

The true hallmark of this record, however, is Jacobsen’s ability for lyrical storytelling. Listeners will find themselves falling into these poetic, emotional and thought provoking tracks.

“I tried to do all of these songs in a first person perspective,” Jacobsen said. “This is more slice of life and one of the things that I wanted to do with it is that, if you were listening to the songs you wouldn’t know they were about presidents.”

This is best exemplified on “Never Asked,” a relatable song that while yes, is about former Vice President Chester A. Arthur, is as equally about dealing with self-doubt and having to rise to an unexpected occasion.

“I never asked to be the most powerful man in the land/ For a time, for a time, I miss my love and I know that I will soon be/ Out of time, out of time,”

These lyrics somberly encapsulates the overwhelming rush of weight the presidency would carry. Jacobsen aims to humanize these larger than life figures whom we so often forget are human beings trying to figure it out.

Lyrically, Jacobsen also pulls no punches when having to deal with some of the presidents that time has turned sour on. The track “Swing Around the Circle” sees a first-person villainous portrayal of former president Andrew Johnson.

“Sometimes the villains are more fun to write about, sometimes in theatre the most important actor is the one who can really make you despise them,” Jacobsen said.

“POTUS” tops out its 42 minute length with the song “Unforgiven,” a deep-dive into the presumed psyche of a newly sworn in President Gerald Ford. The song highlights the pardon that Ford gave to impeached President Richard Nixon following the “Watergate” scandal.

“[The album] is more of a study of history and a study of characters,” Jacobsen said. “I also like that there are some solid songs in there. That even if you don’t know that they’re about presidents, there’s something you can take away and it’s that human element.”

Between Hoover’s bitterness, Chester Arthur’s redemption, Andrew Johnson’s villainy or any of the feelings in between, Jacobsen more than succeeds at pulling back the curtain on these commanders-in-chief to expose their humanity.

“POTUS” is humorous, humanizing and most importantly, challenges the listener to learn more about the subject matter of the concept album. Jacobsen’s “POTUS” more than delivers for experienced folk fans and history buffs.