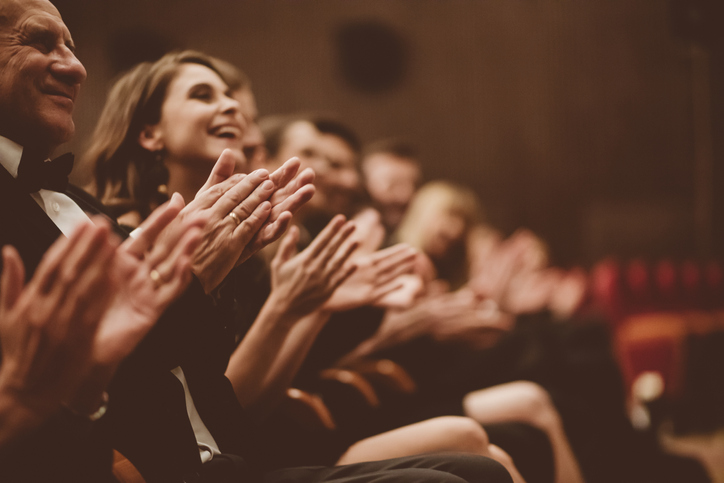 Side view of smiling spectators clapping hands in opera house. Men and women are watching theatrical performance. They are in elegant wear.

The first few months of every year promise one thing and one thing only for filmmakers, television creators and musicians: awards. This awards season, despite being delayed for a month due to the ongoing COVID-19 pandemic, will kick off with the Grammys and the Golden Globes.

While the celebrities in attendance seem to take the Golden Globes less seriously than the Emmys or the Oscars, with many celebrities telling jokes and drinking lots of alcohol, these awards not only kick off awards season for film and television, but are also very prestigious accolades.

Voted on by the Hollywood Foreign Press Association, the Golden Globes seek to honor the best in both film and television, and this year’s ceremony, taking place at 7 p.m. on Feb. 28, will be co-hosted by Amy Pohler and Tina Fey.

Among the most nominated films are “Mank,” “The Trial of the Chicago Seven,” “Nomadland,” “Promising Young Woman,” “Borat Subsequent Moviefilm” and “One Night In Miami.” In the six acting categories, leading contenders include Carey Mulligan for “Promising Young Woman,” the late Chadwick Boseman for “Ma Rainey’s Black Bottom” and Sacha Baron Cohen for both “Borat Subsequent Moviefilm” and “The Trial of the Chicago Seven.”

Every year, the Hollywood Foreign Press Association gives two honorary Golden Globes: The Cecil B. DeMille Award for outstanding contributions to films, and The Carol Burnett Award for outstanding contributions to television. For the former, the award will be presented to actress Jane Fonda whose performances in films like “Klute,” “Coming Home,” “9 to 5” and “On Golden Pond” changed cinema. The latter award will be presented to writer/producer Norman Lear, who created some of the most revolutionary television shows of all time like “The Jeffersons,” “Sanford and Son” and “All in the Family.”

Honoring the best in music, the Grammys promise a fun night starting at 8 p.m. on March 14. It will be hosted by Trevor Noah. Among the nominees for Song of the Year include “Black Parade” by Beyonce, “Everything I Wanted” by Billie Eilish and “Cardigan” by Taylor Swift. Albums like “Future Nostalgia” by Dua Lipa, “Folklore” by Taylor Swift” and Black Pumas’ self-titled album are all up for Album of the Year.

Several artists who rose in popularity in 2020 are all up for the Best New Artist award, including Phoebe Bridgers, Noah Cyrus and Megan Thee Stallion.