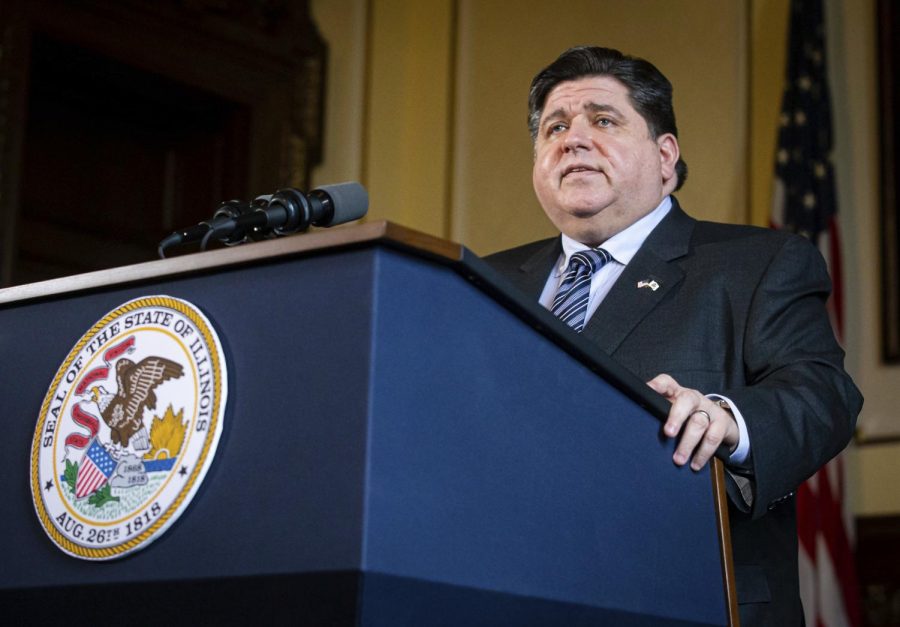 Gov. JB Pritzker gives an update on the COVID-19 pandemic in Illinois during a press conference at the Illinois State Capitol on Jan. 11.

DeKALB  – Governor J.B. Pritzker announced Wednesday during his annual State of the State address that higher education funding is “fully protected” in the proposed fiscal year 2022 budget despite COVID-19 impacts.

A pre-recorded speech of Pritzker’s State of the State and budget address aired Wednesday, where he proposed $41.6 billion in spending for the FY22 state budget. Pritzker recommends cuts to corporate “loopholes” to fill the $2.6 budget gap and includes no tax increase for residents.

Pritzker also announced he’s proposing a $28 million increase to the Monetary Award Program, also known as MAP grants, to a total of $479.6 million in funding. Pritzker said the increase in MAP grant funding will help thousands of more students get scholarships.

“Our colleges and universities are facing so many other challenges that we should not ask them to take on more,” Pritzker said. “Federal COVID relief funding will provide $740 million to post-secondary institutions in Illinois, so the most important place to invest in higher education is in expanding college access for those smart kids who can least afford it.”

The Illinois Board of Higher Education proposed a $50 million increase in MAP grant funding in January for the FY22 budget, but that number wasn’t reflected in Pritzker’s proposed budget.

NIU President Lisa Freeman said in a Wednesday statement that the university is excited and appreciative to see Pritzker propose an additional $28 million in MAP funding, which is critical to recruiting and retaining students.

“We are pleased to see that Gov. Pritzker continues to be a strong proponent of supporting higher education,” Freeman said. “Sustaining funding at the same level as last year will allow us to continue to effectively serve our diverse audience with the high-quality, affordable education and support services they need to be successful, even in this challenging and uncertain time.”

The proposed FY22 budget, which begins in July, holds general funds support for universities flat to FY21 levels. The general fund for universities in FY22 sits at $1.2 billion with $1 million dedicated to the Common Application Partnership Program and $20 million to stabilize College Illinois, the state’s prepaid tuition program.

In the proposed budget, NIU will continue to receive $87 million from the state, the same as the FY21 budget. The Illinois Board of Higher Education recommended a 2% increase in funding for the university, but levels remained the same.

The budget will head to the state’s general assembly for approval in March.

“I have always believed that our economic recovery both as a nation and as a state goes hand in hand with our recovery from the virus,” Pritzker said. “I certainly had no expectation when I became governor that we would spend all of this time battling an invisible enemy together.”