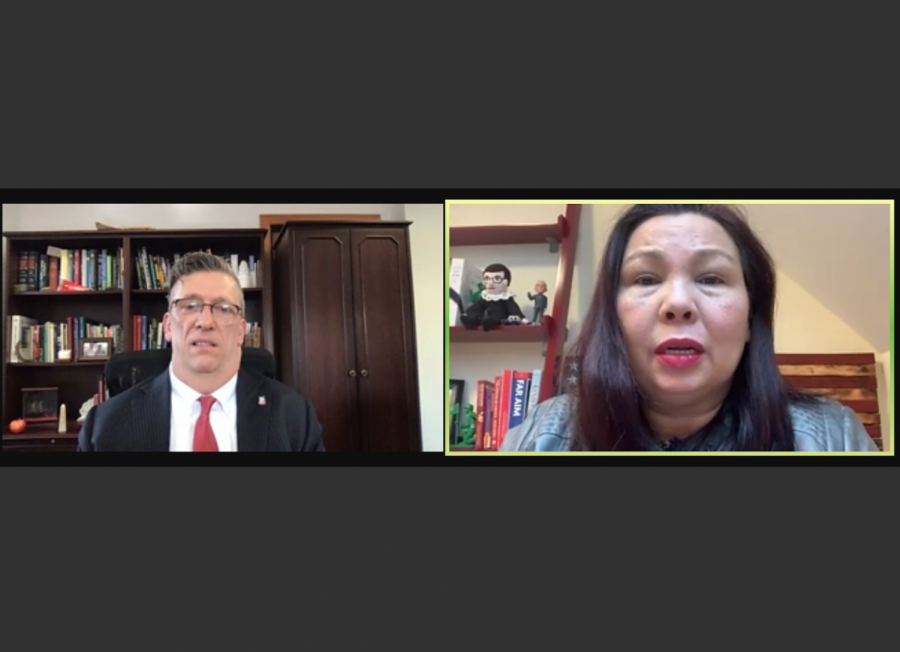 Robert Brinkmann, dean of the College of Liberal Arts and Sciences, and U.S. Senator Tammy Duckworth at the virtual event Thursday.

DeKALB – U.S. Senator Tammy Duckworth said she believed the democratic system in the U.S. is already strong, but had been tested by recent events while speaking at the first lecture of NIU’s “Rebuilding Democracy” series.

Duckworth, a first-term Democrat, spoke at the lecture Thursday via Zoom. She said the democratic process could be strengthened by actions such as third-party drawing of congressional voter districts, increasing voter turn-out, and more citizen engagement with local civic issues.

“This is not a partisan statement,” Duckworth said. “I think that the things that need to be done are things that both sides of the aisle should agree to.”

Duckworth also voiced support for a bipartisan commission to investigate the Jan. 6 storming of the U.S. Capitol.

“I do think that it’s very important that we understand how we got to a place where people waving the American flag, who truly believe themselves to be patriots, felt that what they needed to do to save our democracy was to overcome law enforcement officers and stop a constitutionally driven process,” Duckworth said.

The senator said the immediate issues and concerns moving forward should be overcoming the pandemic and rebuilding the economy.

Duckworth also discussed her ongoing efforts to improve medical benefits and conditions for both active-duty military personnel and veterans.

“Really, for me, my identity is first, a veteran,” Duckworth said.

She discussed reforming the career certifications currently being provided by the armed forces to increase job opportunities for military personnel transitioning back into the civilian workforce.

“The biggest predictor for veterans’ homelessness was not actually post-traumatic stress. It wasn’t people who were self-medicating because of PTSD,” Duckworth said. “It actually starts with employment. The ability to find a job predicts whether or not you’re going to end up homeless. Once they end up homeless, that’s when they start self-medicating with drugs and alcohol and that becomes a downward death-spiral into persistent homelessness.”

Duckworth also brought up what she called “environmental justice.” She spoke on recent protests sparked by a recycling plant being relocated to Chicago’s south side, in which Chicago Mayor Lori Lightfoot was accused of racism and encouraged the relocation of the recycling plant in order to facilitate the building of the high-end Lincoln Yards mega-development.

“These issues are ongoing,” Duckworth said “They are happening across the country, even in DeKalb and Sycamore.”

Duckworth also stressed her belief in the importance of equal access to green energy.

“A Tesla is an awfully expensive car to buy, and if you need to commute and you’re working a minimum wage job, you can’t afford to go buy an electric car,” Duckworth said. “We need to look at that. That’s wrong.”

Duckworth’s 45-minute lecture was the first of the “Rebuilding Democracy” series. Robert Brinkmann, dean of the College of Liberal Arts and Sciences, hosted the lecture and said the series is primarily about how to rebuild democracy so that it is available for all.

Duckworth was taking courses as part of a doctorate degree at NIU but was interrupted when she was deployed to Iraq in 2004. She was subsequently awarded the Purple Heart after losing both legs after her helicopter was downed. The university awarded her an honorary degree in 2010.

She served in both the Illinois and federal Departments of Veterans Affairs before being elected to the House of Representatives in 2012. She was elected to the U.S. Senate in 2016.