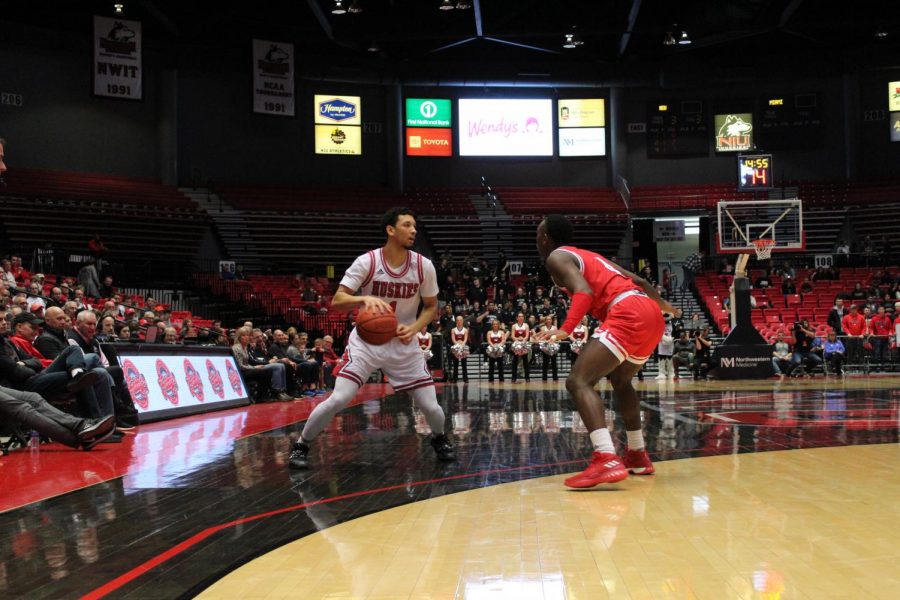 FILE - Sophomore guard Trendon Hankerson surveys the floor Feb. 1 during NIU's 70-55 win over Miami University–Ohio at the Convocation Center. Hankerson had a season-high 18 points Dec. 5, in the loss to Pittsburg.

DeKALB — In a season that saw a tumble from the top of the Mid-American Conference West, two head coaches, an internal COVID-19 outbreak and players opt-out or transfer, the men’s basketball team ends the season on a high note with a 79-74 win Friday over the Central Michigan University Chippewas.

The Huskies haven’t won a game since Jan. 12 in their game against the University of Akron Zips, and entered Friday’s contest with a 1-12 MAC record. The Chippewas haven’t fared much better, coming into the game with a 3-12 MAC record. It’s NIU’s first road win of the season.

NIU was led by junior guard Trendon Hankerson with a career-high 27 points. Junior guard Darius Beane and senior forward Nathan Scott chipped in 16 points and a season-high 13 points respectively. The Huskies were 15-16 from the charity stripe, a dramatic improvement from Tuesday’s outing where the team shot 4-13 from the line.

“I thought we were connected today, the energy was good, although we made some mistakes at the beginning and we missed some shots,” NIU interim Head Coach Lamar Chapman said in a Friday NIU Athletics news release. “The sharing of the ball was a positive. We had worked on zone, but not a lot, and I planned on using it, but not as much [as I did].

Despite the solid defensive performance, the Huskies couldn’t slow down CMU’s junior guard Meikkel Murray, who exploded for 30 points and 10 rebounds.

Even with the win, the Huskies finish the season at the bottom of the MAC with a 2-12 conference record, and 3-16 overall. The team will not have a bid into the 2021 MAC Championship tournament.