Men’s golf struggles in opening round of San Diego Classic 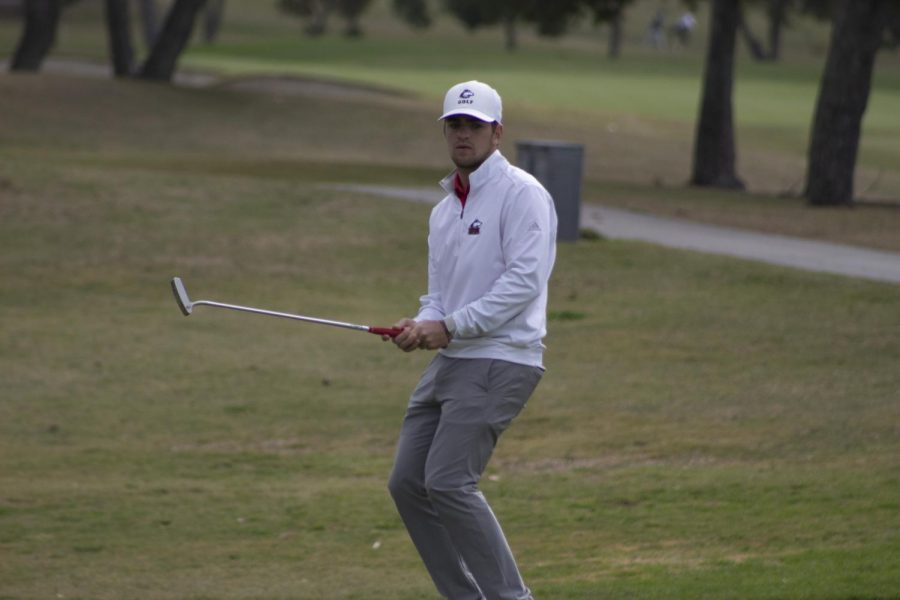 NIU junior Tommy Dunsire reacts to a putt lip-out Mar. 8 during the first round of the San Diego Classic at San Diego Country Club

SAN DIEGO — The Men’s golf team opened up the first round of the Lamkin Grips San Diego Classic Monday with a team score of 21-over-par, 26 shots behind the first round leader the University of San Diego.

Conditions were tough at San Diego Country Club in Chula Vista, California. The forecast saw cloudy skies in the morning with slight drizzle as the Huskies opened up competition at 8 a.m. with winds picking up to as high as 15mph throughout the day.

After a strong showing by the team at the Missouri State University dual-matches, Head Coach John Carlson did not expect this slow of a start.

“[I’m] overall disappointed,” Carlson said. “We certainly have higher expectations with a veteran group than what I saw.”

The Huskies lowest score of the day came from junior Tommy Dunsire who shot a five-over 77 for the day, closing with a triple-bogey seven on the 18th hole. Graduate student Jordan Less was the second lowest at seven-over par for the round.

Though the team did record high finishing numbers, the Huskies started out strong the first six holes, getting to a team score of one-under par early.

“The start was strong,” Carlson said. “I was happy to see an early morning tee-time, which we haven’t had much of, and to watch the guys come out hot.”

With scoring opportunities coming far and between, the team hopes to use Monday’s rough finish as a learning curve before returning to the course at 7 a.m Tuesday for the second round of play.

“This was only our third round of the spring,” Carlson said. “We have a lot to play for still this spring, and we have a group that is hungry to get back after it and improve tomorrow.”