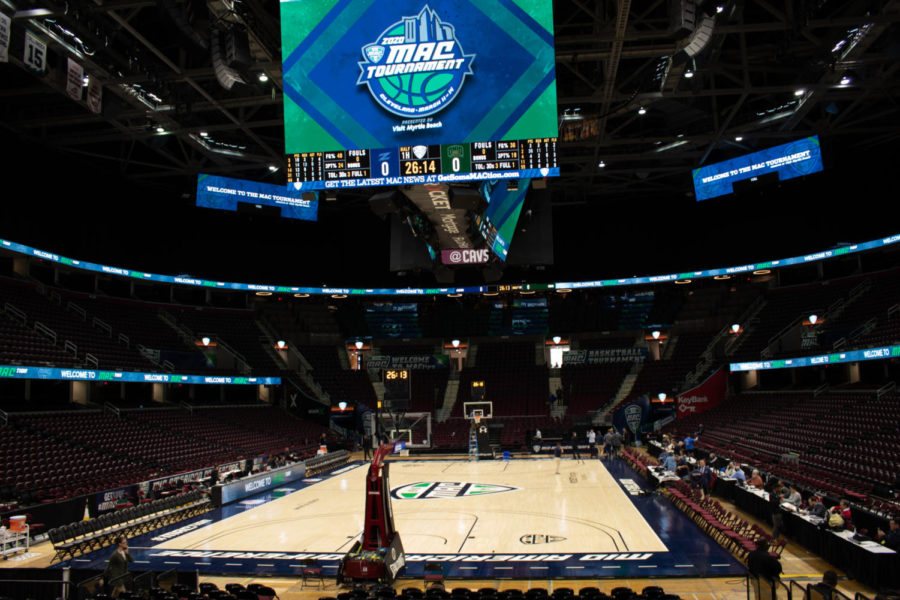 The Rocket Mortgage FieldHouse sits empty March 12, 2020, after the cancellation of the 2020 Mid-American Conference Championship tournaments due to the COVID-19 pandemic in Cleveland, Ohio.

The COVID-19 pandemic has presented the world with what at one time seemed like something out of a movie: Nearly the entire world forced to bend to the will of an invisible threat.

Loss of life, isolation, travel restrictions, canceled holidays, job closures, scarce necessities and other resources; the list seems to go on. While the coronavirus was affecting daily life in other countries before having a major impact in the U.S., there was a growing sense of caution, but the reality we face now seemed near-impossible here. Then the world of sports ground to a halt.

I was headed to Cleveland, Ohio, for the first time ever to cover the NIU men’s basketball team as a photographer and writer for the 2020 Mid-American Conference Championship tournament. I was excited as it was my first time traveling a long distance to cover a major event, especially since it was a basketball tournament. Basketball is the sport that brought me to journalism to begin with.

On March 10, 2020, the Ivy League canceled its basketball tournaments, the first domino to fall. I was shocked reading the news, and it honestly made me worry about the likelihood of the MAC doing the same. I was set to make my six-hour drive the next day. That same day I was forwarded a statement from the MAC stating that the tournament would go on as planned, however only media with credentials and families of the programs would be allowed to attend. The virus began to feel real, but not too concerning.

I left in the late morning the next day, bound for Cleveland, as NIU was in the midst of what was supposed to be a normal week-long spring break. I reached the city just as the sun was setting, casting golden light on the skyline. My hotel was right across the street from Rocket Mortgage FieldHouse where the tournament was scheduled to take place.

The arena is located at the Gateway Sports and Entertainment Complex, an area which I had seen a lot on TV over the past couple years. My room had a perfect view of Progressive Field, where the Chicago Cubs ended their 108-year World Series title drought in the greatest Game 7 in sports history. Right beside it sat the FieldHouse, where at the time was the stage for four out of the last five NBA Finals. What a view.

There wasn’t much to do around the hotel, and I wasn’t exactly in Cleveland on vacation. In the wise words of former Chicago Bulls center Joakim Noah, “I mean, I’ve never heard anybody say ‘I’m going to Cleveland on vacation,’” I stayed in my room. I figured I’d watch whatever NBA games were on at that time.

The Dallas Mavericks and Denver Nuggets were the only nationally-televised game on at the time, as the Oklahoma City Thunder-Utah Jazz and New Orleans Pelicans-Sacramento Kings games were set to follow. However, the Jazz-Thunder game was delayed due to a sick player.

Toward the end of the Mavericks-Nuggets game I was watching, Commissioner Adam Silver and the NBA announced the unplayed games that night and season were suspended due to Jazz center Rudy Gobert testing positive for COVID-19. Teams warming up were pulled from the floor on live TV as the fans were sent home. I was blown away. The impossible happened: the virus had shut down the NBA.

I spent the rest of the night talking with friends and coworkers about the news, and trying to find any information about the status of the next day’s tournament.

On March 12, 2020, just after 6 a.m. I was surprised to find an email from the MAC with no mention of the NBA’s cancellation; it appeared to be business as usual.

I spent the rest of the morning watching ESPN cover the fallout from the NBA’s suspension. NIU was set to play sometime in the midafternoon against the University of Miami–Ohio for the second contest of the day. Around 11 a.m., I got a call from my former coworker and basketball writer Mike Knapp, asking if I had checked my email lately. I immediately went to my computer and found one labeled “MEDIA ADVISORY: 12 PM ET PRESS CONFERENCE WITH COMMISSIONER STEINBRECHER.”

The only information available was that the first game of the day was pushed from 12 p.m. to 1 p.m., and that MAC Commissioner John Steinbrecher was going to hold a press conference. I knew immediately what it was about.

I walked across the street to the FieldHouse to the media entrance to pick up my credentials. From there I walked down a flight of stairs to the tunnels of the arena. It was my first time inside an NBA arena where fans typically weren’t allowed. I was caught up in the moment a bit as I’d seen players like LeBron James walk the same halls during the NBA Finals before or after games.

I composed myself and reached the arena’s media room. It was packed nearly wall-to-wall with reporters and photographers, a far cry from the NIU Convocation Center’s media room typical attendance and feel. I managed to find a seat on the adjacent wall to the press table, set my phone on the table set to record, and then returned to my seat and whipped out my camera.

I began taking photos of the room and listened to chatter amongst the other journalists on today’s events. After about 10 minutes, Steinbrecher and Cleveland Cavaliers CEO Len Komoroski walked into the room. Steinbrecher began with the official statement on the tournament, following in the wake of the NBA and several other NCAA conferences.

“We have been meeting all morning with our directors of athletics, our presidents — talking about what is the appropriate path forward,” Steinbrecher said. “We’ve also been paying attention to what has been going on around us, both in the world at large and in the sports world, and as you’ve seen this morning, you’ve seen a number of conferences that have made the decision to cancel. We have come to the same decision to cancel our event.”

After Steinbrecher and Komoroski fielded questions, the press conference concluded and I immediately ran to the media workroom and typed up the story. The sound of journalists frantically pushing keys filled the room.

I left the workroom after my story was posted on our site and headed straight to the FieldHouse’s arena, as I wasn’t about to head back home without walking out onto an NBA floor. I took a few pictures of the arena and the staff disassembling the tournament’s setup, before making my way back to my hotel room to head home.

The NCAA canceled its championship tournament not long after the MAC’s announcement. The MLB postponed the start of its season, and the NHL and NASCAR suspended their respective seasons.

A year later, I sit at my computer writing this story while the country remains stricken by the pandemic. The NBA has returned since and managed to run its following season without a full suspension of play. Every other major North American sporting league finished or began its season in 2020 and 2021, and many are now bringing fans back into stadiums. Even now, the MAC is in the midst of its conference basketball tournaments, which NIU’s women’s team participated in.

The world of sports stopped on March 12, 2020, but the resilience of its athletes, coaches, franchises, employees, programs and commissioners to continue on with safety as an utmost importance to give the world some small semblance of normal has been a light in these dark times. Sports can bring everyone together, draw attention to issues in our society and bring hope and resources to communities that need it, and not even a virus could stop that forever.