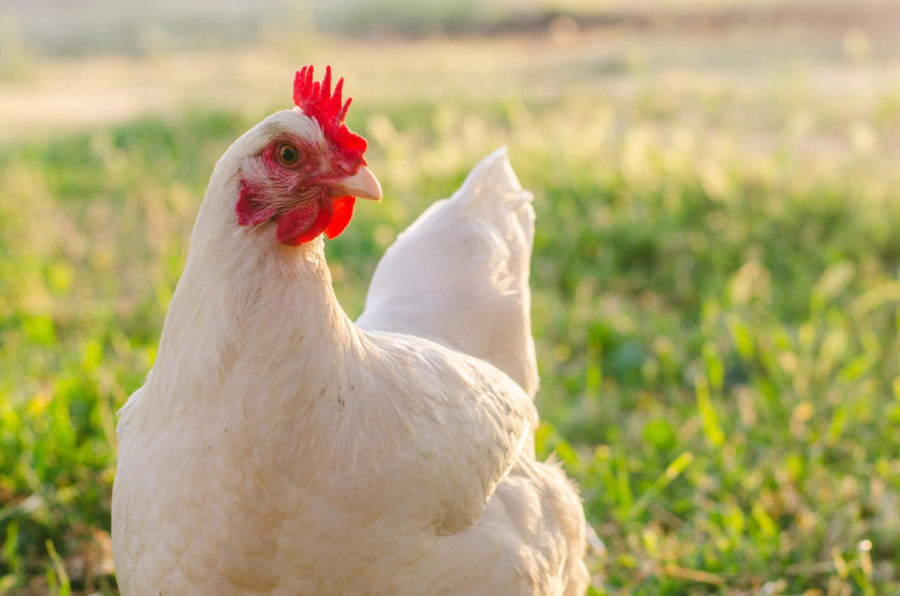 A white chicken roams some grass in the sun.

***Editor’s note: The columnist is part of Sunrise DeKalb, which is the organization that advocated for backyard chickens and is partially responsible for the advisory referendum on the issue***

DeKalb County should allow its community members to own backyard chickens, and community members should vote in favor of the referendum on the April 2021 ballot. DeKalb County residents have been wrangling with municipal codes restricting ownership of chickens in residential areas for years. The issue has reappeared consistently, and it now returns on the upcoming 2021 ballot.

When the DeKalb County board voted to send consideration of backyard chickens back to the planning committee last November, board member Jerry Osland said, “You’re also going to attract every coyote and fox around after these chickens,” according to WSPY News. Osland said, “That’s just the way this works, [sic] backyard chickens is not going to go over well.”

Osland’s view isn’t unique or uncommon, but it shows a key misunderstanding about prey and predators. Osland and other naysayers share the perspective that allowing backyard chickens will increase a predator problem in DeKalb. While people commonly associate chickens with predators like foxes, there is no evidence to support that backyard chickens will attract foxes and coyotes more than rabbits or other prey who already live in the community. The Humane Society said squirrels, birds and chipmunks are common, as well as fox and coyote prey too, yet none of those are attracting predator animals at a higher rate to the DeKalb area.

It has also been alleged that chickens are dirty and would bring disease to DeKalb. Granted, the CDC does warn that there are risks associated with owning chickens in backyards, but they can be handled safely. “Poultry can sometimes carry harmful germs that make people sick,” according to the CDC. The CDC also recommends washing your hands after handling chickens or interacting with their designated area; however, these warnings are nearly identical to their warnings about common household pets such as dogs and cats. The risks imposed by poultry are indistinguishable from the risks posed by other pets.

In November 2020, DeKalb County Planning and Zoning Commission affirmed the right of unincorporated properties to have backyard chickens on their property, but only if a nearby incorporated area already allows backyard chickens, according to WSPY News. That is good, but DeKalb can do better. Now that the referendum has been put on the April 2021 ballot, it’s time for the county to appeal to its agricultural roots and allow backyard chickens within residential areas that have reasonable space to accommodate them.

Backyard chickens pose no new health risks any more than common household pets and can provide a good source of food or income. It should be up to DeKalb’s property owners to decide to own chickens.

Vote in favor of the upcoming referendum to show our representatives that backyard chickens should be allowed across DeKalb county and that the unincorporated compromise isn’t enough.