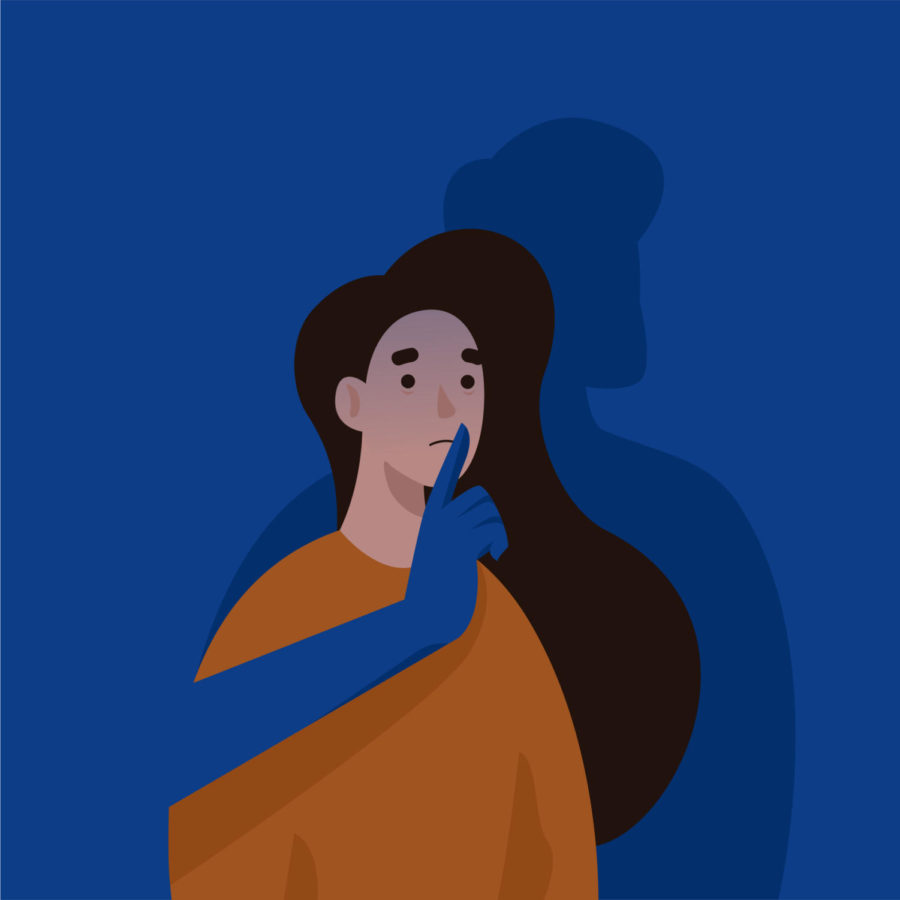 Graphic of a shadow of a man silencing a distraught woman by shushing her.

It can be uncomfortable to separate art from the artist, especially in circumstances where the artist has a history or allegations of committing domestic or sexual abuse. Although it may be difficult to understand how we feel when examining art made by alleged abusers, deciding to consume the work of alleged and proven abusers permits their actions and perpetuates abuse culture within our society.

The discomfort or disappointment audience members feel when allegations come to light is an emotional acknowledgment of the hurt and abuse caused by problematic creators. Whether it’s in film, music or visual art, there are countless stories of abusive behavior, power imbalances, grooming and manipulation in Hollywood.

How we respond to these stories of abuse not only controls how abuse culture is shaped within our society, but also impacts whether victims of abuse feel supported within our local communities.

“The further we go back in history, the more we find (abusers in art) in new places, and it becomes very complicated to understand what our attitude is,” said Lynnea Laskowski, Safe Passage’s Director of Prevention and Communication.

When abusive situations present themselves in mainstream culture, media and entertainment, the public responds one of two ways: either we hear the victim out and support them, or we dismiss allegations and convictions and make the decision to carry on and consume an abuser’s content.

When abuse occurs in the public eye like Hollywood, multiple people have to ignore the behavior and allow it to continue. FKA Twigs and her allegations against ex-boyfriend Shia LaBeouf is a perfect example of how often society tends to dismiss the red flags of someone admired by audiences and the media.

LaBeouf has a long history of turbulent behavior, according to the New York Times.

“This is the kind of thing that makes a person abusive,” LeBeouf said in 2015 to his then-girlfriend during a dispute, according to a video within the article. “If I’d have stayed there, I would’ve killed her.”

If LaBeouf had been held accountable by audiences and media for his abusive behavior in 2015, his future alleged victims like FKA Twigs could have been protected from abuse. Hollywood and its celebrities do not deserve a pass to allow abuse, no matter the financial success abusive creators achieve. Industries should be held accountable just as much as the abusers they enable.

The context in which we view content created by abusers matters. Beyond being entertained, artistic works are the result of many people who enabled the artist, a person in a position of power, to use their status to manipulate or harm anyone they wanted.

Laskowski said this is especially true in our local communities when we think to ourselves, ‘I’m not causing any harm by watching Woody Allen movies, or watching Louis CK comedy specials,’ because it’s not just about the survivors of those specific instances.

“It’s about your friends and your community that (are) watching to see if you still support that person,” Laskowski said.

As someone who has experienced sexual assault, I listen to the responses of my friends and family when allegations of abuse arise in the media, and especially when it happens within my local community. It does not feel like a safe space to speak your truth when those around you search for ways to justify abusive behavior or continue to watch those creators.

Laskowski said audiences could be trying to see if it’s okay or not for them to come forward with their own experiences of harassment, sexual abuse or domestic violence. When survivors see the public gloss over the abuse of famous people, they wonder how someone famous can’t even come forward and be believed, then doubt if anyone would believe them.

One in four women and one in nine men experience severe intimate partner physical violence, sexual violence, or stalking according to National Coalition Against Domestic Violence. The National Coalition Against Domestic Violence says these abuses can cause victims injury, fearfulness, post-traumatic stress disorder or contraction of sexually transmitted diseases.

People are reaching out to Safe Passage for services now more than ever as the COVID-19 pandemic has isolated many victims and kept them inside with their abusers, according to Laskowski. Gender-based violence increases in times of crisis like the pandemic, according to the World Health Organization. The pandemic created a dangerous barrier between victims and those who care for them.

“I don’t think we will ever be able to remove art, especially from a context of oppression or pain, especially because there are so many levels, and I hate to say that,” said Laskowski. “It is certainly not the case that should we remove every piece of art created by an abuser that we would have nothing left.”

When we support survivors as they come forward with allegations of sexual and domestic abuse, we impact the narrative within our society that enables abusers in the public eye and behind the closed doors within our neighborhoods and communities. When we denounce abuse culture, we make safer spaces for all.

The context to which we view material created by abusers either dismisses the abuse completely, or it doesn’t. It is up to us as viewers to make that distinction by being intentional in our media consumption. Our words, content consumption and behavior have an impact on survivors of abuse, and it can be difficult to see how that affects those around us when there are still so many victims who have yet to come forward.