Huskies return to 500 for the first time this season 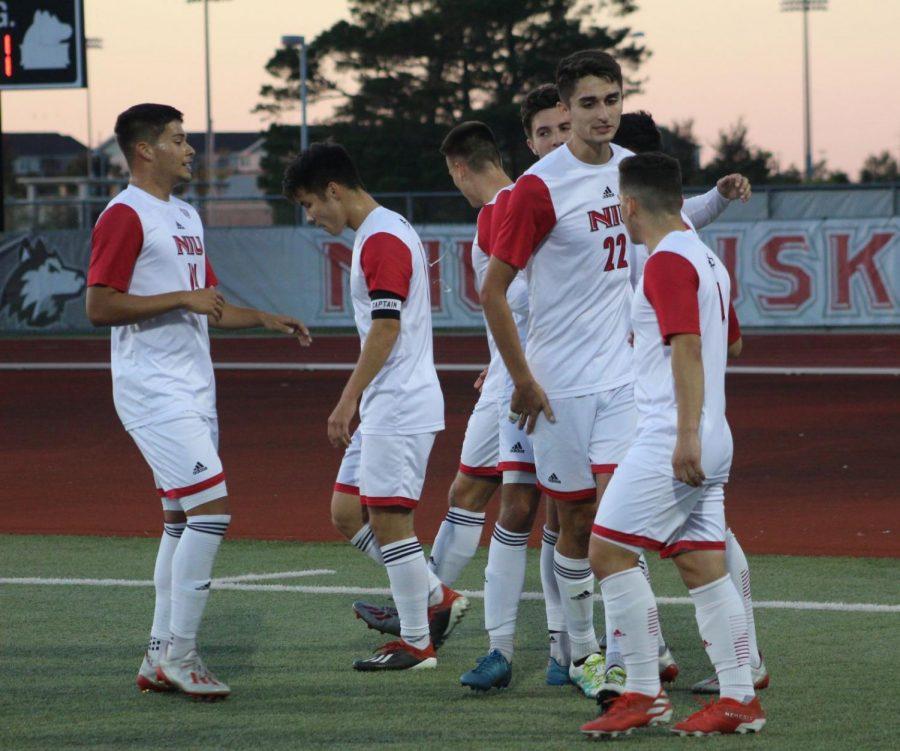 The Huskies celebrate a goal Oct. 8, 2019 during an eventual 5-1 win against Eastern Illinois University at Soccer and Track and Field Complex.

DeKALB — Men’s soccer came out on top in a closely-fought battle against the Western Michigan University Broncos Wednesday, 3-2.

The Huskies extended their winning streak to two wins after defeating the Broncos. The Huskies, who were down 2-1 in the second half of the game, fought from behind and scored two goals in a row to claim the victory with sophomore Adrian Lara scoring two goals.

“He has been fantastic all season, in particular the last few games since conference play started,” Swan said of Lara. “He has arguably been our best player, so it is outstanding to see him adding goals as well. He has his first career goal (earlier this season) and getting two today is fantastic, it is just that commitment to get on the end of the ball and keep your composure.”

NIU was led by sophomore defender Adrian Lara who scored two goals in the second half, one at the 59-minute mark and the other at the 74-minute mark. Also, first-year midfielder Camilo Estrada scored the first goal for the Huskies at the 34-minute mark of the game.

Western Michigan was led by sophomore midfielder Dylan Sing who scored the opening goal of the game in the 15th minute, and junior forward Eric Conerty powered the ball to the back of the net in the 39th minute to put the score at 2-1.

“This was a huge character test for the guys,” said NIU head coach Ryan Swan. “We have nothing but respect for Western Michigan, one of the most consistent teams in the conference during my tenure, so when you go behind against them it is really tough. They scored two nice goals, but the guys responded every time.”

There were three yellow cards given out during the game. Junior defender Anthony Markanich and redshirt sophomore Enrique Banuelos received the two cards for the Huskies. For Western Michigan, redshirt sophomore goalkeeper Issac Walker was the only player to receive a yellow card for the Broncos.

It was late game heroics from the NIU defense that helped the Huskies secure the win with no shots being allowed from WMU for the final 27 minutes of the game. It helped take the pressure off of redshirt sophomore goalkeeper Martin Sanchez, allowing  the Huskies to mount the comeback with the two goals that would eventually win them the game.

For NIU, this is its first win over WMU since Nov. 13, 2011, where they have lost seven times and tied once since then. The Huskies have also beaten two of the top-ranked teams in the Mid-American Conference in the past two games, including the University of Akron Sunday.

This win moves the Huskies to 3-3-1 on the season heading into their final game of their three-game home stand against Bowling Green State University. Kick off will be at noon Sunday in DeKalb.