Board of Trustees votes to extend Freeman’s contract 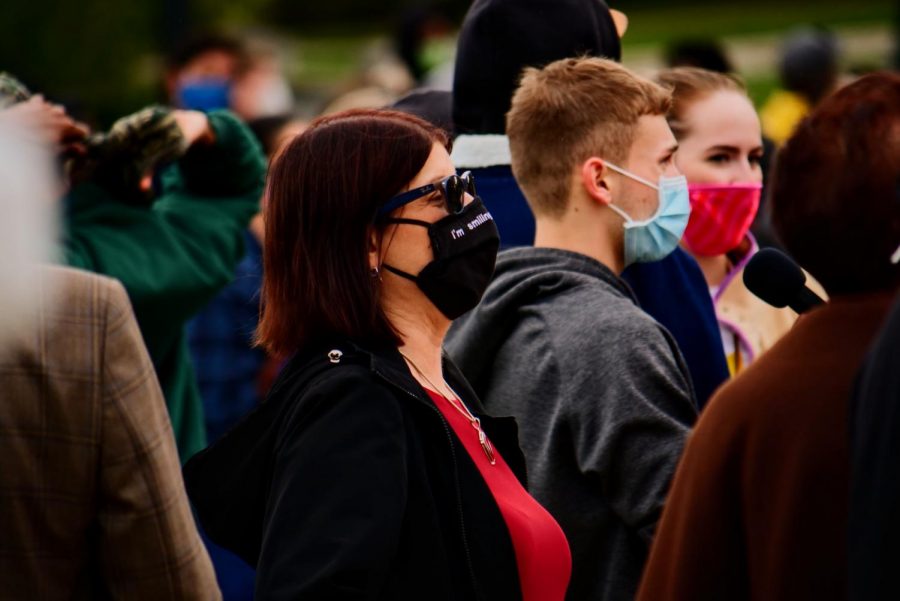 NIU President Lisa Freeman attends the Art and Soul Black Lives Matter street painting event Oct. 1. Smith said that Freeman and other professors have reached out to learn how they can make NIU better for black students.

DeKALB – The Board of Trustees unanimously approved a measure Thursday to extend NIU President Lisa Freeman’s appointment for another four years. In the extended agreement, Freeman will also receive a $30,000 salary increase by fiscal year 2024.

The extended appointment will take effect July 1 and will end June 30, 2025, according to the March 18 Board of Trustees agenda.

Board chairperson Dennis Barsema said Freeman is a leader with a clear vision, strategy and heart for the NIU community.

“One of my proudest moments was when I presided over her 2019 investiture as the 13th president of NIU and our first female president,” Barsema said. “Today is another proud day when we vote on extending her contract.”

“I want (students) to know that they should feel assured that we have a president that is woke,” said Trustee Montel Gayles. “I’ve used that statement to really indicate that she understands the issues they may face, a lot of diverse students that are trying to get an affordable education.”

Freeman was appointed president in September 2018 after serving as acting president since 2017.

“I’m really excited to see in the coming years, the direction and leadership that President Freeman will continue to provide the university,” said student trustee Aidan Shields.

Vice chairperson Eric Wasowicz said Freeman has built a great team that works very hard to advance the university forward, and it reflects the diversity and the people of Illinois.

“I was gratified, but I was not surprised that the overwhelming support for the extension of Dr. Freeman,” Wasowicz said. “As a board, it’s our biggest job, and has been designated to us by the legislature and the governor of Illinois, to hire and fire a president and also extend a president.”

Trustee Robert Pritchard said since Freeman began in 2018, she has brought a tone and vision to the university that’s changed NIU.

“We had many concerns five years ago when I was in the state legislature about what was happening at Northern,” Pritchard said. “With very strong leadership and the vision, mission, and really the tone that she has set has really changed the university, it’s changed recruitment.”

Freeman said she was humbled by the comments of other trustees at the meeting. She said over the last four years, the university has made measurable, meaningful progress.

“With this contract renewal, I’m so enthusiastic about the opportunity to build on our positive momentum and continue to work with students, faculty, staff, alumni, friends and partners to move NIU forward,” Freeman said.