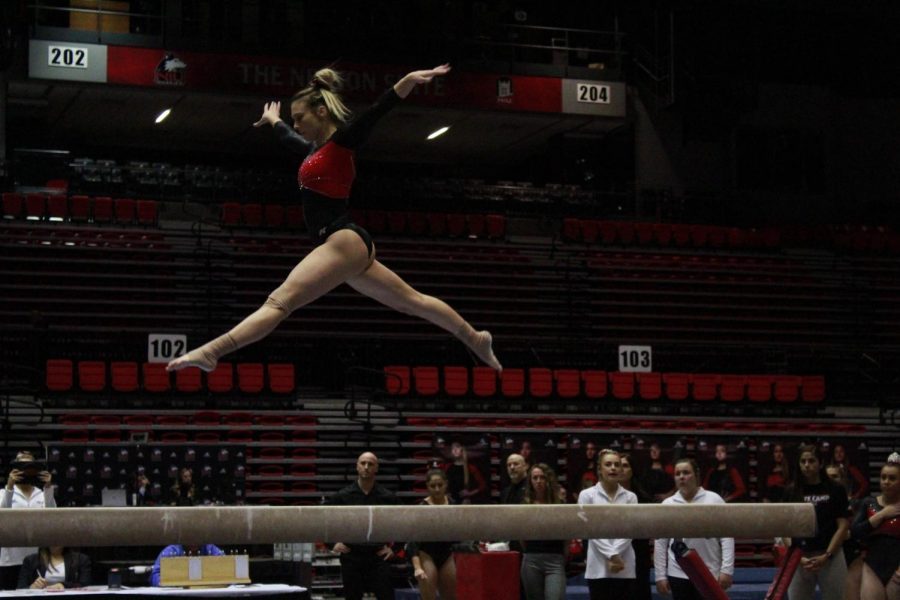 “We had a great day, and a few little mistakes kept things from going in our favor,” Head Coach Sam Morreale said in a Saturday NIU athletics news release. “It is bittersweet when you’re in striking distance at the end. We gave it our all; we were in it and that’s what you want— you want a chance.”

The Huskies’ began the championship on the floor where the team opened with a score of 49.050. Junior Tara Kofmehl tied for second with a 9.900, sophomore Nicolette DiPrisco finished top-ten recording a 9.850 in the event. NIU was in good shape heading into its second rotation on the vault.

The Huskies’ were led on vault by Kofmehl who took home MAC co-champion honors with a score of 9.850. Kofmehl and seniors Gabby Welch and Zoie Schroeder all finished in the top-four in vault, leading the Huskies’ to take the event as a team and keep pace with Eastern Michigan University, who was leading the championship through two rotations.

The third rotation saw the Huskies take to the uneven bars when sophomore Natalie Hamp and junior Morgan Hooper led NIU in the event. Hamp locked-up co-champion honors after scoring a 9.900 on the event. Hooper finished inside the top-ten with a 9.825. With just one rotation left the Huskies’ needed a big number on the balance beam if they hoped to retain the MAC Championship.

On the final rotation of the Huskies’ season, Schroeder led the way tying for second with a beam score of 9.875 on the day. Senior Mia Lord came in just behind Schroeder with a 9.850, and Kofmehl rounded out NIU’s top-three with a 9.800. Though the team made a push, the Huskies’ fell short in their attempt at retaining the MAC title.

In the all-around, Hooper took third with a 39.125 over her four rotations, falling .125 points behind Western Michigan University first year Sarah Moravansky. NIU has now finished top-two in the conference in each of the last three competitive seasons, and its two individual event titles marks the third straight championship the Huskies’ have had multiple gymnasts claim event titles.

“As a program, we’ve turned the corner,” Morreale said in the release. “It’s a testament to the alumni that came before and that paved the way for us to build it to where we are now. What they did has allowed us to attract better talent which keeps us competitive. I’m super excited for the future.”

Though the Huskies’ team season has come to a close, Hamp and Kofmehl could still find themselves competing in the NCAA gymnastic regionals as individual competitors. Regional selections will be announced at 4 p.m. Monday followed by regional contests taking place April 2 at various locations across the U.S.